Have you ever noticed how some reviewers get a tad carried away with certain titles? When this version of the popular gang-inspired franchise was released recently  the first on the current next-gen consoles, it was greeted with the kind of high scores normally reserved for bendy Russian gymnasts. But now the hype has died down a little, does the game live up to it?

In truth, the short, honest answer is no. Its by no means a bad game, but to hail it as the greatest gaming experience ever is just silly. As you would expect, the environ Liberty City (which feels more like NYC than most games set in the Big Apple) is both vast and varied. You play Niko Bellic, an Eastern European who has been persuaded by his cheeky cousin Roman that Liberty City is a great place to make money. And hes not wrong there, especially for someone with Nikos natural talents for using weapons and driving cars like a loon. 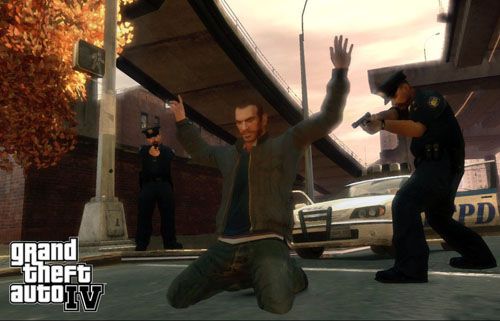 Exploring the city at first feels quite daunting; the size of it merits its own Google Earth site. However, after the first few missions, a familiar pattern emerges  drive for miles, talk to someone, drive a bit more, kill a few people, drive away avoiding the attention of the police. All of the missions are variations on this one particular theme. Many have complained over the feature-length cut scenes of Metal Gear Solid 4, however, its easy to lose interest in your umpteenth run-in with a gang boss, whose mouth just seems to run away with him. They can be avoided, and if you have the stamina to play through the game until the end, youll no doubt be skipping through a few of them. The script can be funny in places, but for the most part, its simply repetitive.

Much has been made of the scale and depth to the city, and the level of interactivity you have with it. Yes, it is mighty big, but sadly its not that clever. For instance, there are plenty of people walking the streets, many having conversations on the phone, or with other people. None of these you can just go up to and have a chat with. Try to interact with them and it could just turn into a street brawl.

Open up the map after a couple of hours of playing and you realise that the actual number of shops, clubs, bars etc you can frequent throughout the entire game is small. This is a real shame, especially when theres nothing you can spend all your blood money with. Fancy a new HD telly? Forget-a-bout-it! Whos up for some pizza from a local Supermarket? Forget-a-bout-it! Shenmue for the Dreamcast (RIP) had an amazing interactive world, and that was released eight whole years ago. Another major gripe is the driving. Understandably using cars to get from point A to B in a game this vast makes perfect sense  but who was the clever clog that thought it would be a great idea to add traffic jams to the equation? Thats right people, virtual traffic jams. There were too many occasions, usually on a bridge or a tunnel, when there was nothing but gridlock; do we really want this in our games? Of course not. And we certainly dont want to pay for the privilege either.

Up until this point you may think that this AAA title has no redeeming features, which is not completely the case. Niko carries around a handy mobile phone, which allows him to call various characters up to either start a mission, or just go for a beer, or simply shoot the breeze. He can even arrange dates with young ladies he meets. Again though, these are usually restricted to playing mini-games of darts, pool or bowling, or going into a restaurant for food, then cut to a cut-scene of you coming out, with your date asking if you can drive her home. Incidentally, your character can be rewarded with a sleep over, but dont expect any hot action, as its the only time that Rockstar handle a situation tastefully in a game, with a cut scene that implies that Niko had a rather pleasant time. One of the few places you can go to for entertainment just so happens to be a strip bar. However, pretty much in keeping with the real thing, these visits tend to be quite soulless and embarrassing. Does anyone really want to have a private dance with a virtual lap-dancer? Perhaps anyone under the age of eighteen playing (shame on you, as the game has an 18 rating) might get more than a little excitable at the prospect; and those legally playing the game and having a party in their pants at the sight of some bare electronic code in front of them  well, shame on you lot too.

He can also take in a couple of shows, including Ricky Gervais doing stand-up at a club. Unfortunately the material used just isnt funny; lets just hope in the case of Gervais that hes keeping all his good stuff for paying punters. The game does possess a few redeeming qualities. Flying a helicopter around the city  especially at night, is quite impressive. The handling of the bird takes a little getting used to, as do all the vehicles in the game, but with a bit of practice it becomes second nature.

The aim and shoot aspect of the game has also improved greatly from past titles. You can lock on to enemies with your weapon of choice, so even if they move around you can still make sure your bullets find them. You can also shoot from cover now, which can certainly help keep your health up.

The radio stations are also top notch; sometimes its just nice to go for a spin around town listening to an array of great music. The only downside is that theres no option for customisable tunes, which is a real shame. One of the stand out missions in the game saw Niko having to climb up on a van, crawl over the roof whilst trying not to roll off, in order to move forward towards the driver. Unfortunately this kind of innovative play was missing from so much of the rest of the game. What we have for the first time however is online play. You can take to the streets with friends/enemies driving, running, shooting your way around Liberty City to your hearts content. Considering the game is basically a single player game, the multiplayer options are far from shabby.

Overall though this isnt, as many predicted it to be, the greatest current next-gen game. What we have instead is a title that simply relies on the innovation set by its previous instalments, as opposed to creating a truly ground-breaking game of its own.