Wales. Home of dragons, rugby and Gareth Bale. And although set in picturesque Snowdonia, this is a film that the Welsh Tourist Board probably won’t be tooting their Welsh horn about, as it literally shows their nation in an unfavourably gloomy light. 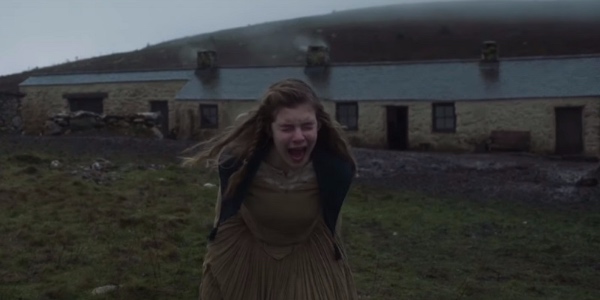 When will Coldplay just stop! Arrrggghhhhh!

With her husband off fighting in a war, Elen (Maxine Peake) is left to not only tend to their rural farm, but also raise their two daughters, Gwen (Eleanor Worthington-Cox) and Mari (Jodie Innes), alone.

As it becomes more of a struggle, she finds herself relying on her eldest Gwen to contribute more with the running of the household. It’s certainly not made any easier when there’s pressure from the local gentry who is keen on using dishonourable methods to move the family on.

So which one are you spirit? Uncle John or Frank Sinatra?!

There are feel good flicks and then, well, then there is Gwen. Imagine there is a tunnel, with no discernible light at the end whatsoever; that’s Gwen, that is.

Set in the 19th Century in rural Wales, Gwen is the story of a young woman with no hope in her life. In truth, she is a child, who should be enjoying her childhood along with her younger sister, but circumstances dictate that she is forced to grow up quick.

Their bleak scenario also causes friction between mother and daughter; Elen is rapidly descending into a world of trouble, so much so that it’s having an impact on her own health. And although Gwen is more than keen to help out as best she can, her mother resents the fact that she has to, which widens the rift between them.

English director William McGregor, who also wrote this film, knows a thing or two about dramas in rural settings, having directed a number of episodes of the BBC’s recent Poldark series. And although there is a quiet beauty to the scenery, the wintry landscape, much like the dark mood on screen, never lets up.

Despite all this gloom, and by God there’s a lot of it, it’s the performances that will see you through it all, particularly that of the exceptional Worthington-Cox. The eighteen-year-old is simply heart-breaking throughout; if it isn’t the coldness of her mother that she is confronted by, it’s the Welsh weather. And how she didn't freeze to death running around in that flimsy nighty is anyone's guess.

McGregor is in no mood to give a cheery Dickensian carrot of hope here and there, instead choosing to unfilter this scenario in every sense possible.

With its dark and moody atmosphere, you should wrap up warm for Gwen, as it’s bound to chill you to the very bone.

***Fancy winning a copy of Gwen on DVD? Then you should enter our competition. Click here to enter.***