This Staines beat combo massiv have taken their sweet time joining the dots on their third studio album, with their last musical outing being 2007's Once Upon a Time in the West. But as the saying goes, good things come to those who wait. 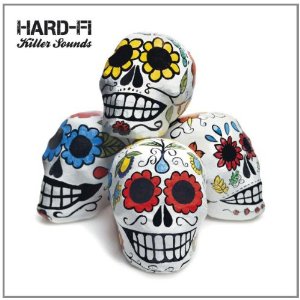 With a bold as brass intro, the band open with a cracking tempo with 'Good for Nothing'. Despite Richard Archer's vocals sounding slightly on the washed out side, the track steams along like a runaway train. There's a little piano break that has echoes of Primal Scream, but it doesn't slow the song down for long. It's a pumped up bad boy and a sizzling way to kick off an album.

The single 'Fire in the House' puts in an appearance next. It's a change in direction in sound, this time coming across as a homage to late New Order. It's a grower, but never blooms into full blown love.

The production of 'Give it Up' is very much on the tight side. It's a rocky little number that is haunted by a whistle that drifts across the track. The whistle alone is reminiscent of the one featured on Landscape's 1981 hit 'Einstein A Go-Go'. It may well burrow its way inside your head and take on squatter's rights. Good luck getting rid of it.

There's nothing quite like a sea of bass. The sound that is, not the fish. And there are just waves of it on 'Bring it On'. Again, it's a track that seems to have borrowed some pointers from Michael Jackson in places. It's the beat. It's quite Bad. It pounds away, taking no prisoners. A definite highlight.

They go a little further afield for their musical thievery with 'Feels Good', that has been dunked in a spicy bowl of Bollywood to good effect. And even though it contains the twinginess of the sitar at its core, it's coated in Tefal for extra toughness.

Another instrument kicks off 'Stop'  the harmonica. It disappears shortly after, acting as a short intro to what can best be described as classic Hard-Fi. They do throw a touch of a Theremin in for good measure, just to mess things up a little, but there's denying this track is Hard-Fi-by-numbers. And that's by no means a slur.

'Stay Alive' is a curiosity, sounding like a mash-up between Duran Duran's 'Girls on Film' with Radio 4's 'Sound of the Underground'. And somehow they pull it off.

That bad beat sound returns for 'Excitement'. Just when you think that it's reached its highest gear, it picks up yet another one. It sounds a little dated compared to everything else here, but as an album filler track, it could have been a hell of a lot worse.

What begins as a rather embarrassing dance track, soon manifests itself into a far meatier affair. 'Love Song' has a greater lightness of touch than elsewhere on the album, but doesn't suffer greatly from it. It's a little tongue-in-cheek lyrically, which is nice to hear.

'Sweat' is clearly Hard-Fi doing Prince. It's not a bad nod to the diminutive royal one either, just missing the odd high pitch screech.

For the title track, the band have gone back in time for some inspiration. Listen to 'Killer Sounds' enough, and you may well hear the influence of Cockney Rebel's 'Make me Smile'. Or not. But it is there. It's a softer, mellower sound, with poignant lyrics telling a story of how a young soldier survived war but couldn't hack it in the real world, so you should enjoy life while you can. All on an upbeat bed of noise. It's an odd mix, but works well.

So yes, Hard-Fi have most certainly been sonic looters with Killer Sounds; picking elements from other songs, genres and eras here and there, like the little tinkers that they are. But thankfully it all works well, making it quite possibly the band's most competent and cohesive work yet.

Hopefully it will be the album that justifiably pushes them out of the shadows of the likes of Kasabian, who always seemingly pip them to the pop post.

It may be an album of going round the houses, on some kind of musical rag and bone trip, but the boys finally deliver the goods.