You can blame The Simpsons for this. It was the first prime time animated show that was primarily produced for adults. It was painfully sharp, silly, witty as hell, but also had a whole lot of heart.

Its remarkable success opened the animated door for a myriad of animated shows, that included the likes of Family Guy, South Park.

It was only a matter of time before these shows dipped their toes in the lucrative gaming market, with The Simpsons: Hit and Run and both South Park RPG’s (The Fractured but Whole and The Stick of Truth) being excellent examples of using the license to its potential.

One of the more recent animated kids on the block – well, 2013 – is Rick and Morty, which has quietly built a strong audience over the years. The show’s creator, Justin Roiland, hasn’t been content with a hit TV show, so decided to branch out into the world of video games. And instead of making the Rick and Morty video game, he’s come up with a completely new scenario, that sees you trying to save the world. 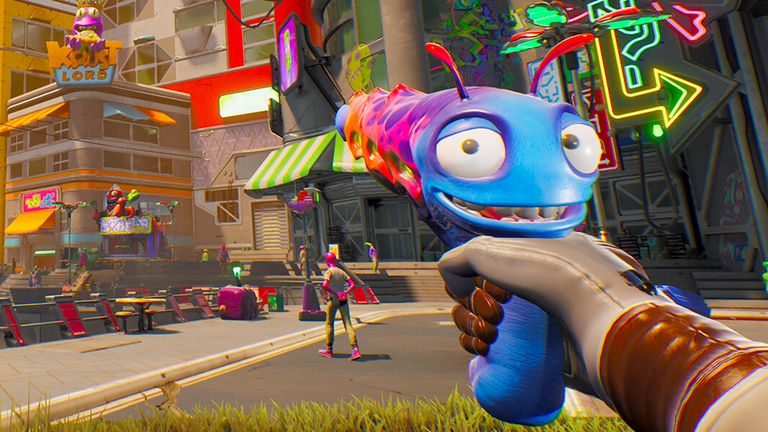 So tell me, what do you think of gun control reform?

When your parents are out of town, it’s almost a law that a party needs to be thrown. And that’s exactly what Lizzy plans to do, which is why she’s off getting the booze. Before the party kicks off, you notice something a little odd outside; you go to investigate and only find a spaceship in the neighbourhood.

And out of it come aliens – lots of them – and they don’t appear to be your friendly ‘E.T’ types, as they start blasting up the street. You come across a weapon of some kind, which tells you its name is Kenny and that it’s a Gatlian, and informs you that you and your entire planet are in a whole heap of trouble. The only way for you and Lizzie are to survive are if they get inside, and Kenny gets to teleport the house the hell out of there. Which he does.

The next time you open your front door, it leads out to the alien world of Blim City, which Kenny explains is a good place to start if you’re to save Earth. You are going to save Earth, right? Because if you don’t all humankind will soon become alien snacks. 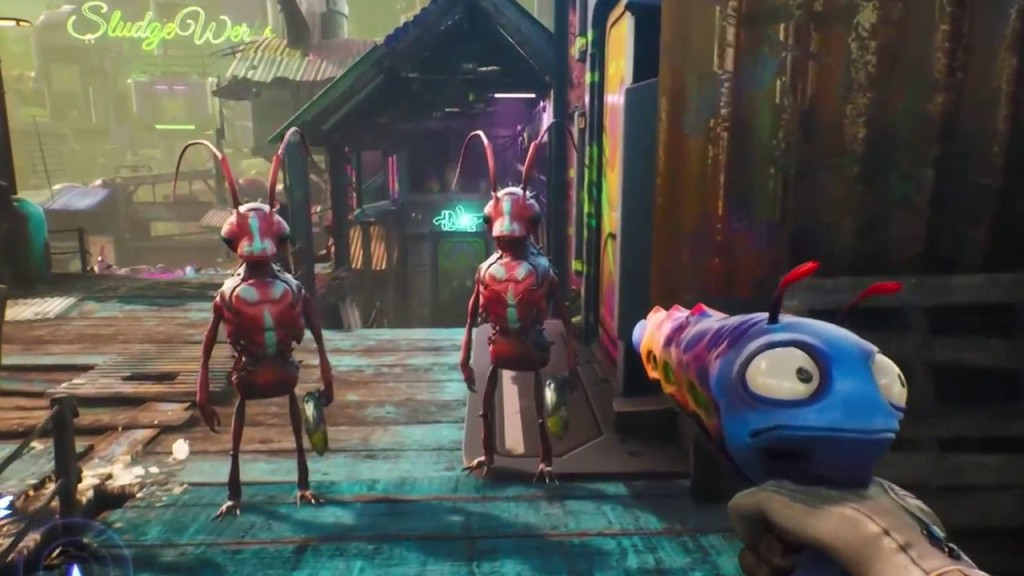 I have some chewing gum, I mean it's used, will that do?

So as you can probably detect, this game is all kinds of silly. And it might be just this reason that has lead to it being so divisive amongst critics. But what do they/we know, right? Since its release the game has been warmly embraced by the gaming community and has certainly proven to be a hit for them. And we can see why.

High on Life is almost a concept game, bridging the gap between a video game and a TV show. Which is no doubt exactly what Justin Roiland had in mind.

It is a game with a huge amount of dialogue thrown at you, particularly as the weapons you pick up each all have a unique voice and personality. And they have a lot to say. The key thing to point out however, is that it’s overseen by TV show writers, and not wannabe TV show writing game writers. This means you get more of a comedy TV show experience than your average video game.

But the quality of the dialogue doesn’t matter if you’re not a fan of the humour, regardless of how well it’s written, which has probably led to its Marmite response.

If you’re not a fan of this kind of humour – a little base, rude and overall silly – you can actually turn the amount of dialogue you get down, but that would be pretty redundant, because what you would be left with is a fairly unremarkable first-person shooter.

Together though, and you have a uniquely entertaining first-person shooter experience.

There are a few different locales you have to visit, that keeps it interesting, even if the same types of enemies crop up everywhere you go.

You also get to open up different ways of traversing the alien landscapes too, which is pretty fun.

The stars of the shows however, are you’re weapons. Not only do they have their own personalities – literally – but they have their own abilities too, but swapping weapons out during a fight has never been this entertaining in Call of Duty that’s for sure.

It’s also the type of game where it’s actually quite rewarding going up and striking a conversation with a NPC, as you’ll never quite know where the conversation is going to go.

The actual mechanics of the game are a tad rough around the edges in places however. Boss fights can be pretty annoying as there is no save feature throughout them, so even if your only one shot away from finishing off your boss foe, if they take you out, you go all the way back to the start, which is infuriating.

There’s no fast travel either, which is a pain, so there’s no easy way of just getting back and forth between worlds.

The shooting mechanics are also a little on the loose side, and don’t feel as precise as they could have been.

But all these can be forgiven for the overall experience. It’s a game that will certainly entertain more if you’re into this sort of humour, which isn’t for everyone. But if you are, you’ll definitely get a buzz from it.