According to the Guinness Book of Records, Sherlock Holmes is a record breaker. He’s listed for managing to place the largest number of cold baked beans up his nostrils in thirty seconds (73). If this sounds a little farfetched to you, then you have cleverly deduced that it is indeed a lie, bravo.

More believably is the fact that Sir Arthur Conan Doyle’s creation has been depicted on screen more than any other literary human character, over 250 times. Being added to that ever-growing list is a portrayal of the great detective by Will Ferrell.

Although it’s an impressive number, obviously the list doesn’t take into account quality. Over the years there have been great portrayals of Holmes on screen, and plenty of not so great. And then, right at the bottom of the barrel, you have this. 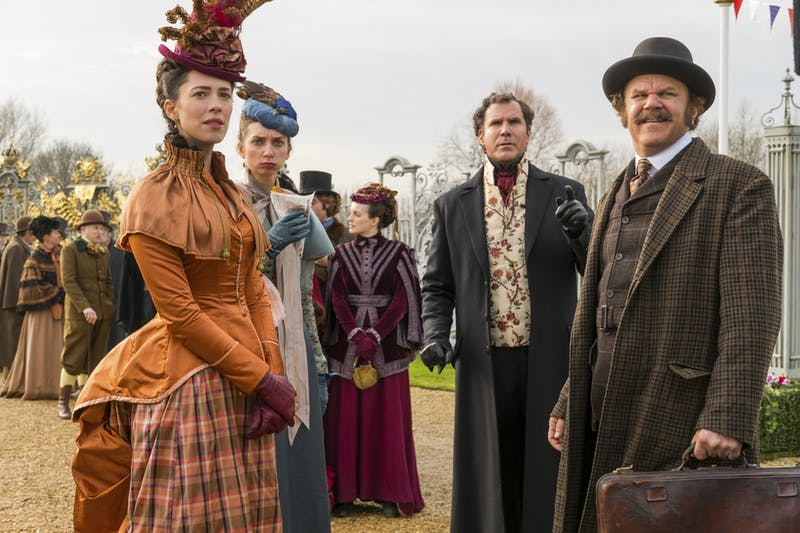 Oh i say, is that Bendict Cumberbitch over there? Awks...

London, 1881, and the world’s greatest detective, Sherlock Holmes (Ferrell) is about to give crucial evidence in court, with his trusted companion Dr Watson (John C. Reilly) by his side.

Despite overwhelming evidence to the contrary, Holmes reveals that the man standing in the dock is not his nemesis Moriarty (Ralph Fiennes). This testimony allows for the defendant to walk free, much to the horror of Inspector Lestrade (Rob Brydon) who is convinced that they’ve got their man.

The situation is made worse during a birthday bash for Holmes being thrown by her majesty (Pam Ferris) at Buckingham Palace, when cutting the cake leads to a corpse falling out with a note attached from Moriarty, declaring that the Queen will die in four days time.

With the clock now very much a-ticking for Holmes and Watson, the race is on to capture the fiend Moriarty and save the Queen. 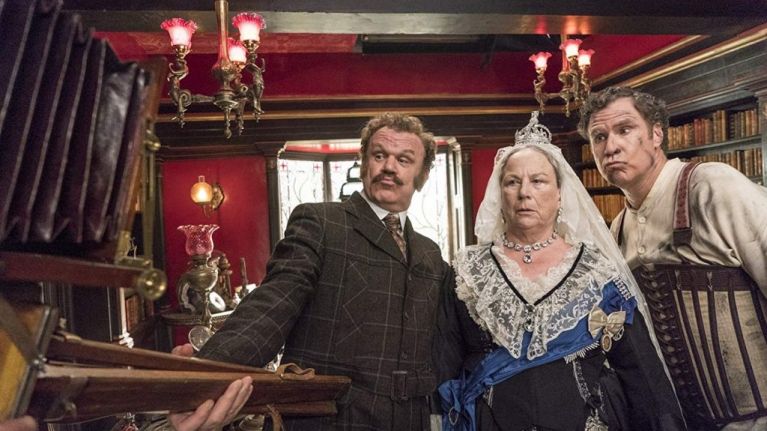 No, this will be really funny, trust, us, just pull a silly face.

It has to be said that Will Ferrell makes a fine Sherlock Holmes; he has the stature and most certainly cuts a dashing figure as the world’s smartest sleuth. What he clearly doesn’t have however, is the accent. With both Ferrell and Reilly clearly using Dick Van Dyke as their reference point and spiritual dialect coach, the pair seem to revel in their mockney accents. And as this is marketed as a comedy, that’s certainly allowed.

You don’t need a magnifying glass to discover the film’s biggest issues however, as they’re all there on the screen for all the world to see. The real villain of the piece is the script; it is as sharp as a bar of soap with its embarrassing attempts to be funny.

In fairness it starts off fairly bright and entertainingly, but after ten minutes it loses its way, suffering from a complete loss of direction. Etan Cohan, who not only struggled with the direction of this his second feature, but also takes full responsibility for admitting to writing the thing to boot. To wit, he failed miserably on both counts.

Ferrell and Reilly are at their best when they are obviously improvising, which they no doubt had to do often considering the weakness of the script. But their brave endeavours aren’t enough to save this film.

Cohan is seemingly aware of his shortcomings in the writing stakes, as he throws in a number of modern cultural references, none of which work, in blind panic. And for the film’s big finale, he even resorts to relying on the Titanic; but his lame efforts only mirror that of the ship’s outcome by sinking in a big way.

This film is a missed opportunity if ever there was one. Ferrell could have really gone to town as Holmes, given a decent crack at it, but Cohan’s influence gives this effort the appearance of a SNL sketch that refused to end.

There is a chance that it may have created a new sub-genre however; not so much the whodunit, more the whydoit.