It’s this time of the year where usually things start hotting up at the box office, when Hollywood releases its big hitters. This year however, due to current Covid conditions, is very different.

So much so that what passes for a blockbuster is something markedly different, as the release of this home-grown, intimated drama illustrates. 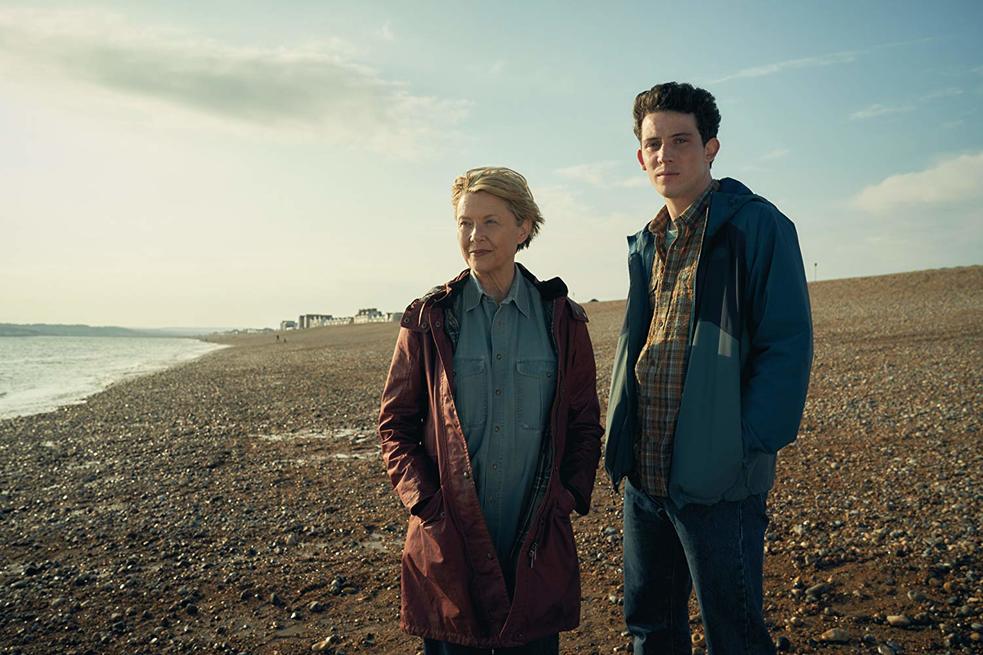 Well yes, the age difference does bother me...

Living in the cosy, seaside town of Seaford are Grace (Annette Bening) and Edward (Bill Nighy). This year will mark their 29th year together, but the mood is far from celebratory.

Grace is becoming more and more frustrated by Edward’s inability to communicate his feelings to her. Despite all her prodding, Edward remains very much tight lipped.

One day he informs Grace that their son Jamie (Josh O’Connor) is coming down to visit them for the weekend, which he knows is bound to cheer her up.

It seems however that Edward invited him down with an ulterior motive, which he reveals once Jamie is back under the family roof. He wanted Jamie there because the following day he intends to tell Grace that he’s leaving her, and he thought it best if Jamie was around for support.

And although Grace has been frustrated with Edward, she’s far from prepared for the dramatic news on the horizon.

Bill Nighy was pleased to shoot his first M & S ad, as he got to keep the clothes.

William Nicholson may not be a name that you are immediately familiar with, but he is a British writer with an impressive body of work, having written the screenplays for Shadowlands (which he adapted from his own play), Gladiator, Les Misérables, Unbroken and many more.

Having written the screenplay for this, he also directs, which is for only the second time, after his directorial film debut with Firelight over twenty years ago. And although there are certainly signs of cinematic ring rust, he shows a solid aptitude for his writing skills.

Essentially the film works as a two and half hander play, with O’Connor (from The Durrells fame) chipping in from time to time, with his perspective. He’s going through some heartache of his own, and with what’s happening between his parents, he realises that he certainly is a product of both of them. All of which the young actor handles with assured aplomb.

The heartbeat of the film however is the strained relationship between Grace and Edward. There are clues that it has been treading water for some time now, but it reaches that awkward point when one of them decides it is finally time to move on. Nighy delivers an impressive take on a man conflicted by thoughts of both seeing light at the end of the tunnel, but also the pain it will cause to Grace once he embraces it. It’s the kind of subtle turmoil that Nighy has perfected over the years.

Bening, as you would expect from such a fine actress, shines too, even on the British accent front. Perhaps where she under-delivers is by giving negative energy, but without the raw emotion you would expect from such a scenario. You get the idea she is in bits, as her dialogue is certainly indicative of, but physically she appear to hit an emotional wall. Much of that may well be down to the character however, as Grace is quite complex, to say the least.

It’s Nicholson’s script however that impresses the most, as weaved in-between the deterioration of a long relationship, there are gems of beautiful one-liners littered throughout, with the best possibly delivered by a character with only one scene in the whole film.

He also makes good use of the coastal locale, with the cliff setting not only expanding the drama out of the house, but also acting as a metaphor for relationships on the brink.

If this is the new summer blockbuster, then there truly are grim times ahead. But with Hollywood yet to commit to putting content back in cinemas for fear of losing out on the big, big bucks, perhaps there’s a big opportunity for small-budget films like this, with some impressive talent at the helm, that will not only entertain, but serve as a telling reminder that cinema, at any time of year, is more than just about superheroes and blockbusting action flicks.