Considering how gloriously gory history is, it can be a real struggle to teach it to kids in school. Much is this is down to the teacher; not everyone is fortunate to have a Robin Williams in full ‘Oh Captain my Captain’ mode. Most are more likely to have a teacher who is mentally broken, devoid of all hope, whose teaching plan mainly consists of how to get out of teaching and find a job that pays.

Often then, it’s just more convenient to turn to entertainment for education. And, lets’ face it, more fun, with show’s like Frankie Howerd’s Up Pompeii!, and comedies own Wikipedia of recent English history, Blackadder.

Taking that winning formula, and using it to get into the tiny minds of children, has been the entertaining BBC children’s show Horrible Histories. And although the 2015 comedy Bill featured many of the regular cast of the show, this is the first official film of the show to make it to the big screen. 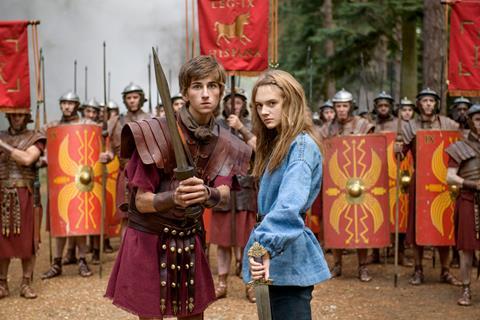 Here's a tip, just think of it as a metal lightsaber...

Rome, 54 BC and a young Nero (Craig Roberts) has just become emperor. He’s looking forward to making his mark on history, if his busy body mother Agrippina (Kim Cattrall) didn’t interfere so much that is.

When smart teen Atti (Sebastian Croft) has a spot of bother with the emperor, he finds himself sent to what Nero considers a stain in their empire – Britain. At first he’s astounded at how basic life is there, and then he meets young Orla (Emilia Jones) – well, actually, she captures him and takes him prisoner.

It’s not long before Atti gets to see the thorn in Nero’s side in person – Boudicca (Kate Nash). She’s not keen on living under the Roman Empire’s rule, and so it looks inevitable that it’s time to go to war. 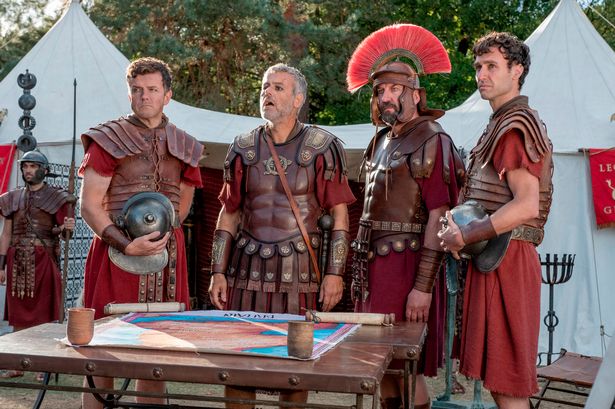 We ordered that food on the app an hour ago. Where is it?!

Considering this is the first Horrible Histories flick, it’s ironic that many of its regular players are missing here. No Matthew Baynton, Simon Farnaby or Jim Howick; perhaps they were too busy working on the BBC comedy Ghosts that they all star in. Instead they’re replaced by the likes of Roberts, Nick Frost and Lee Mack. You’d think that these replacements would be more than capable, but when you take into account the love interest with the two youngsters Jones and Croft, it all feels too heavily diluted to be a Horrible Histories production, and suffers because of it.

The script is still fairly entertaining however, with sharp gags coming thick and fast. The writers wear their influences on their short-sleeved robes, with obvious nods to both Carry On and Monty Python’s forays into historical stories on the big screen. It’s just lacking the odd gem like Kenneth Williams’ classic statement “Infamy, Infamy! You’ve all got it in for me!” from 1964’s Carry on Cleo.

It could have certainly done without the musical numbers, which only confirm the feature’s lacking production values; it looks like an extended episode of the TV show, as opposed to a big screen adventure.

Where it excels however is as a subliminal teaching tool; it’s the kind of feature that should be compulsory in schools, where there’s more chance of classes learning from it, than from that soulless individual at the front of the blackboard who is crying so hard on the inside.

Sure, it’s not Blackadder funny, but it’s certainly worth interrupting the endless Frozen loop with. And who knows, the little tykes may actually learn something from it too.

Fun and suitably silly at times, but won’t go down in the annals of cinematic history as a classic.