The western is dead. Sad but true. Some might say that the genre has only muted into superhero flicks, with two tribes fighting it out, but with far more Lycra. But if we’ve learnt anything from film (which, if you’re anything like us, is pretty much everything), things often come back from the dead.

After years of service, Captain Joseph Blocker’s (Christian Bale) time in the US army is drawing to an end. He has not only seen bloodshed, but has been responsible for a fair bit of it himself too, much of which has belonged to Native American tribes. Despite knowing their tongue fluently, he has massive trust issues towards them after so many of his friends have been slain at their hands.

He is disgruntled then, when his commanding officer issues him with one last task: to escort Cheyenne Chief Yellow Hawk (Wes Studi) and his family, who have been their prisoners for several years, back to their home land. Blocker refuses, but when he’s threatened with having his pension taken away from him, he agrees.

Not long into their trip, Blocker and the group come across a burnt down farm, with the distressed Rosalee Quaid (Rosamund Pike), who is struggling with coming to terms with the loss of her entire family, right in the middle of it. Blocker feels that it’s in her best interest to join them, as they continue through treacherous lands, full of foes who wouldn’t think twice about murdering them all. 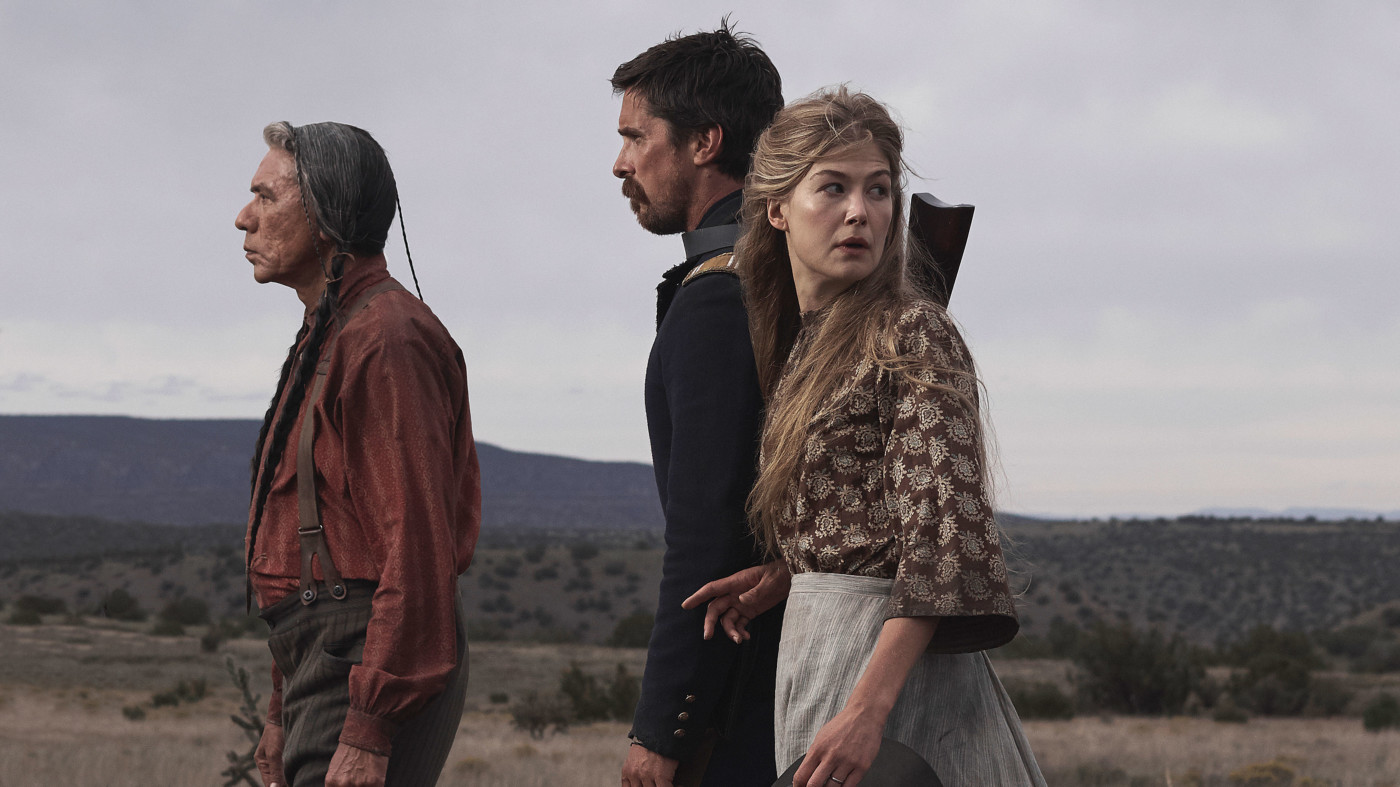 I don't want to worry anyone, but I think my fart is following us.

After directing three titles to date, mostly set in recent times (Crazy Heart, Out of the Furnace and Black Mass), Cooper, who also took on writing duties, has taken on an ambitious period piece.

Like his other films, Hostiles isn’t shy about nodding to its influences, which include John Ford’s The Searchers and Michael Cimino’s Heaven’s Gate. But what he’s done once again, is missed the opportunity to stamp his own vision on the film.

The fact that it isn’t heavy on the CGI is a breath of fresh air, set as it is in beautiful wide open spaces of the west. With very little movement with the camera, many shots are similar to stills, as they take in the splendid spectacle in front.

There’s something worrying static about both the script and the performances. Very few do brooding as well as Bale, but it would have been nice to see more of a range emotionally. Pike fairs a little better, with a role that depends on some depth before sadly resorting to mundane reality. The story too, suffers from a lack of range, rattling around in a fairly long running time (2hrs15mins) as it does.

Still, you can see Cooper growing in confidence however, revealing potential for better things down the line. In a world full of comic book heroes though, Hostiles should be commended for appealing to an audience older than twelve, aching for stories without super powers.