There are a few generations that exist now where the notion of play without swiping at a screen or button bashing a joypad is completely foreign.

Try explaining the joys of marbles to them. A collection of coloured glass balls, which were never asked for, but always appeared at hand, that glided with ease across a linoleum floor. Or the thrill of have the Scuba diving outfit for your eagle-eyed, gripping hands Action Man figure. Or adding yet another vehicle to your box of toy cars.

Ah that box of cars; made of sturdy metal, with plastic wheels that spun wildly in the palm of your hand. They could handle any terrain if held by the roof; otherwise they would make hard work of a heavy piled carpet. They would always make a satisfying thud against the skirting boards, even if it meant some flaking of the paint work, of the board and the car, as a result.

The biggest name in die-cast toy cars at the time were Matchbox, but some stiff competition pulled up alongside them in 1968 when US toy giant Mattel introduced Hot Wheels.

53 years later and the Hot Wheels brand once again parks itself onto consoles with its latest iteration, Hot Wheels Unleashed. It is a game that is highly likely to bring out that kid who played with cars back in the day in the big kid trapped in the adult body. 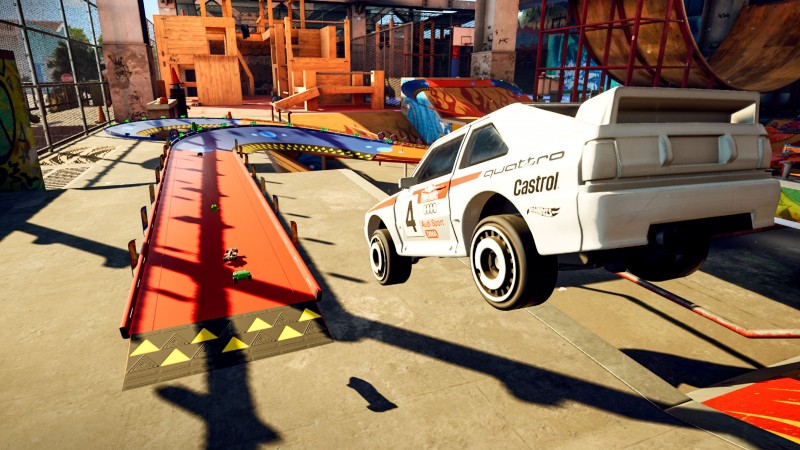 Damn, I think the GPS is on the fritz again!

The premise is a simple one; you control a Hot Wheels vehicle taking part in a race on an indoor Hot Wheels track. Vroom vroom baby.

To get you started in the single player game called City Rumble, you are offered three blind boxes; each box containing a random vehicle. There’s a frisson of excitement as the box opens, as it finally reveals what Hot Wheels car you own. With a choice of three now at your disposal, you can start on the campaign.

You then take your best to the start line, and race on the first of many indoor tracks against other Hot Wheel cars. Get on the podium and you unlock the next destination on your map. Drive, win, repeat.

It’s joyously simple, and yet the deeper into the game you get, the more devious it all gets. Tracks get more difficult as you progress, offering a huge range of obstacles that can literally throw you off course. And in the Hot Wheels world, drift is king, so you need to get to grips with it quick.

As a game it has all the right ingredients to be a pure classic, but there are a number of elements that put the brakes on that happening. Take the upgrade system for example. Get enough gears from winning and you can upgrade your vehicle, the rub being that you can only do this once per car. So you can only upgrade every car in your collection once, making the whole upgrading process completely redundant; that fastest car in your collection will always remain your fastest, because even when all your other cars are upgraded, they still can’t go faster. 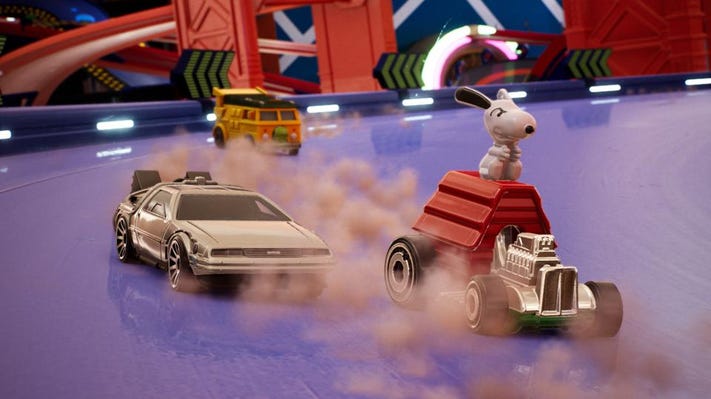 And not a banana skin in sight, take that Flux Capacitor!!!

This means that you will mostly be relying on one car in every race you take part in, regardless of how many vehicles you have in your collection. We got quite giddy with excitement when we picked up Knight Rider’s K.I.T.T car, let’s face it, who wouldn’t, and of course we took it for a spin. But it wasn’t as fast as our fastest car, so back in our growing collection it went. This undermines the entire Hot Wheels collection, and feels a massive cock-up. The game does force you to play with other vehicles, but that’s also not well implemented, but more of that later.

As much fun as driving the one vehicle we could win with was, we did feel the control was a little off. Driving in a straight line was a little challenging for instance, as there was often an unnatural sway to the car, particularly on elevated track parts, often gliding off to the left on its own accord.

The track itself also felt a little on the tight side. If you’re going to succeed in Hot Wheels Unleashed, then you have to learn the way of the drift. Now drifting is standard in most racing games, and is not that difficult to pull off, and yet on these tracks there feels like far too much pinging off the sides occurs, regardless of how good your drifting skills are.

The tracks themselves are good fun, but after a while, they lack variety. For some reason they mainly take place indoors, which is a little dull. Considering that the real tracks could be built anywhere, it seems odd that there couldn’t be a track in a garden, for instance, or on a beach, just to break up the monotony of an indoor environ. Considering how creative the tracks can be, it’s odd that their locations are desperately lacking.

The version of the game we played was for the PS5 which was initially quite exciting. The fact that the sound of bumping against other cars comes out of your controller speaker is certainly fun. But the tension on the trigger accelerator caused us a number of problems. Holding it down constantly and feeling the tension on it actually made our hands cramp after playing for a small amount of time, that it made our hands ache severely afterwards. It got to the point where we trying our best to hold it down, but were struggling to get around the course, particularly on the time trial courses, in any good time. Thankfully you can turn it off, and as soon as we did, we found we could go faster. You live and learn.

During the single player you will come across secret areas. Unfortunately they are so secret that they are unnecessarily cryptic to open. Instead of just being told that you need a certain car to race on a particular track, you’re offered a bizarre clue that you have to solve at some point. Completely pointless and throws yet another spanner in the works.

It could sound like we’re being overly harsh on this title, and perhaps to a certain extent we are, but these are all valid elements that prevented us from falling in love again with playing with Hot Wheels.

To its credit the multiplayer side is fun, with you being able to play split screen against someone with you in the same room, or the usual online fun that can be had.

You also have the ability to create your own tracks, which will no doubt produce some mind-blowing masterpieces. We gave it a go, but ironically, couldn’t get out of the tutorial after literally not being able to put down the finishing line. But we’re sure others will have better luck.

Despite these grumbles, there is fun to be had. No really. The single player campaign is highly addictive, and thanks to the races not being too long, you can dip in and out of it for a quick racing fix. Not that our sessions were that quick, because once you’ve opened up the next section, that one more go mentality quickly kicks in.

Yes it can be a frustrating experience, especially as with a little bit more thought, the game as a whole could have been a modern classic, but if you have a car-shaped hole in your heart from playing with the real thing back in the day, Hot Wheels Unleashed can fill it.

It may well drive you crazy, and don’t even get us started on those damn spiders and their bloody webs, but Hot Wheels Unleashed should still be a part of your racing collection.