How to Train your Dragon

2010 saw the release of some animated big hitters, with not only both Shrek and Toy Story returning for their threequels, but in the third dimension. Hoping to get in on the action before it all kicked off in this cartoon showdown was Dreamworks' How to Train your Dragon.

The Viking warriors of the settlement of Berk have a bit of a pest problem, but the kind that Rentokil cant help them with. The village is treated like a fast food takeaway service for dragons  a fly-thru if you will.

Stoick the Vast (Gerard Butler) is the respected leader of this brave band of bulky brawlers. He not only helps to defend his village from attacks, but also has a training regime in place to teach the youngsters of Berk the art of how to kill a dragon.

To take part in the training is seen as a great honour in itself, which is why Hiccup (Jay Baruchel) desperately wants to participate. He, more than anyone, has a lot to prove, especially when you consider his father is Stoick. But sadly for Hiccup, his puny demeanour does not a Viking make. It doesnt stop him from doing his bit however, for as an apprentice blacksmith he creates a weapon that he believes can shoot dragons down from out of the sky. His dad pooh-poohs the invention, but Hiccup decides to give it a go anyway.

During the next dragon attack, Hiccup uses his dragon-slaying device, and sure enough shoots down a flying beastie. But not just any old dragon; he brings down one of the almost mythical breed known as Night Fury. Unfortunately for him, no one sees his victory and his great achievement is disbelieved by one and all. He almost begins to believe he made a mistake himself, until he discovers the dragon, lying injured just outside the village.

Just as he is about to slay the beast, he has a change of heart. Instead, he decides to help the dragon recover. In doing so, and spending more and more time with the one he names Toothless, he changes his destiny as a Viking forever. For Hiccup soon learns that training a dragon can be far more beneficial than slaying one. However, he knows that his father and the rest of the village wont be easily impressed by his ability to tame their greatest enemies. 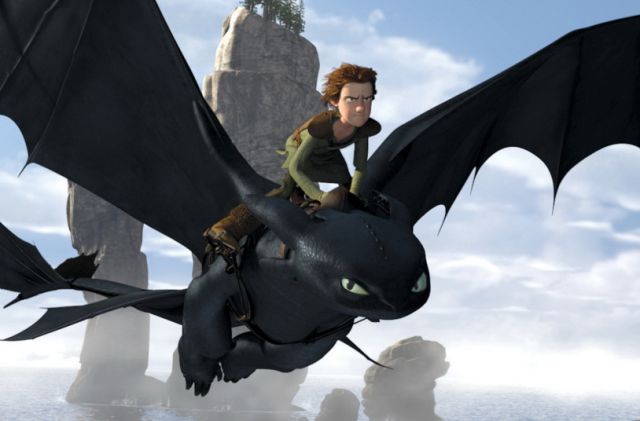 If I've told him once, I've him a million times not to wear his shoes when we're flying.

One of the first things youll notice about this film is that its not one for historical accuracy. All the grown up Vikings actually appear to be Scottish, while all the youngsters are seemingly American. Considering that so many young Americans are surprised by how well people from the UK speak English, this is only going to cause even further confusion. Still, it will keep a lot of their History teachers on their toes.

As you would expect from Dreamworks, whove been making animated features for twelve years now, the animation is highly polished. The palette is surprisingly muted, particularly when you consider that Toothless the dragon himself appears all in black; hes sleek nchic looking, but not exactly colourful.

Another surprise is the fact that Toothless is far from your average, archetypal cuddly cartoon dragon. He actually looks quite sinister, initially at least, with more of a reptile vibe about him than a dragon. But just as Hiccup slowly warms to him, so does the audience. Cat owners in particular will notice how cat-like certain dragons can be.

Although were hardly the greatest advocates for the current trend for all things 3D, How to Train Your Dragon is a title that really utilises the technology. The flying sequences alone are a great advertisement for wearing those silly glasses in public, which is just as well as there are a fair number of them. But unlike some other films, it feels less like a gimmick and more of an integral part of the overall experience.

Its only real weakness is its story. Its reasonable to say that it holds very little in the way of surprises. That said, the script is crammed with nice dialogue, some of which comes from the pen of Rescue Me creator Peter Tolan.

It scores highly on developing relationships between characters too. Not only the one youd expect between Hiccup and Toothless, but more interestingly, the ones that Hiccup develops between his father and his peers.

The film also gets credit for having one of its main characters being maimed in battle. Its a small detail but one that proves that even in an animated world there can be casualties of war.

This then is a dragons breath of fresh air in a year suffering from stale, animated sequilitis. Its surprising fun and entertaining and can certainly hold its own against any of the cemented franchises out there. A definite must-see for animation admirers.