If you’ve ever had the misfortune to live next to bad neighbours, you can appreciate how utterly annoying they can be; be it constantly having conversations on loud speaker on their phone outside, or playing jazz, of all things, in their garden at a failed attempt to seem a cool cat, or just being twats in general.

The one thing you can do however, as a last resort, is move. Imagine then if you have a land border with a neighbour, and you can’t move anywhere, as is the case with South and North Korea.

This tense and taut political thriller, set in South Korea in the eighties, illustrates the issues neighbouring countries can have, when they simply don’t get along. 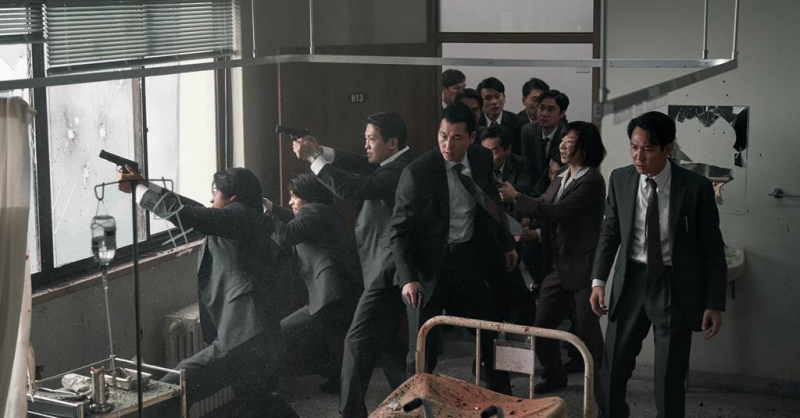 This paintball experience is pretty intense.

Security is the top priority for the Korean Central Intelligence Agency, especially its Foreign Unit chief Park Pyong-ho (Lee Jung-jae) and Domestic Unit chief Kim Jung-do (Jung Woo-sung). Although their aims are the same, they have a little history between them, that’s a little awks.

It becomes even more strained when they find that they have to work together, as they have Intel that they have a mole in their ranks, who apparently is dishing national secrets to the North. Putting their personal differences aside, they have to uncover the identity of this mole as quickly as they can, as lives are at stake. Well i'm not saying anything til I get an apology either...

It appears that South Korean cinema is having a golden period at the moment, as it just can’t do any wrong, as this superb thriller illustrates perfectly.

What’s even more remarkable is the fact this is a directorial debut from one of its stars Jung-jae, who recently shot to worldwide fame starring in the superb Netflix show Squid Game.

It could easily have been subtitled Guessing Games, as a majority of the film is focused on discovering the identity of the mole known as Donglim. Jung-jae does a fantastic job as the film often feels like a cinematic version of the shell game, but instead of a ball under a cup, it’s the identity of the mole, that gets swished around, back and forth, with an audience guessing and re-guessing, who the spy is. The result is quite dizzying, with the film trundling along at a cracking pace, and accusations of who it might be, flying all over the place.

It’s also impressively brutal in places too, with some frenetic action sequences that are simply breathtaking.

Jung-jae proves himself to be a triple threat, giving an absorbing performance, some sharp direction , and as he’s already proven, he’s a dab hand at red light, green light too. In any case, he’s yet another South Korean actor/director that we’re going to have to keep an eye on.

Hunt is the type of film that reels you in fairly early on, and keeps you there, dangling throughout, with its gripping story and fast-paced action, making you well and truly hooked.