With all the many side projects that Nintendo has Mario do, it’s difficult to see how he manages to invest any time into his day job of plumbing. On top of his adventures platforming, they have him taking part in Olympic events, karting, tennis, golf and partying hard, to name just a few. You would think that being a mascot would allow a pass or two on a few games, but apparently not.

Although keen to whore out Mario every which way in the gaming world, Nintendo are oddly more protective of other characters in their franchises. Take Link for example; his day job consists of trying to protect a princess – much like Mario – but Link rarely ventures outside of realm of adventuring, albeit for a little light brawling in Super Smash Bros, or some recreational karting.

Here though, Nintendo have called him up to participate in a world that Link is all too familiar with, and yet isn’t part of the Zelda franchise. So in a sense, Link is on somewhat of a Busman’s holiday for his latest outing. 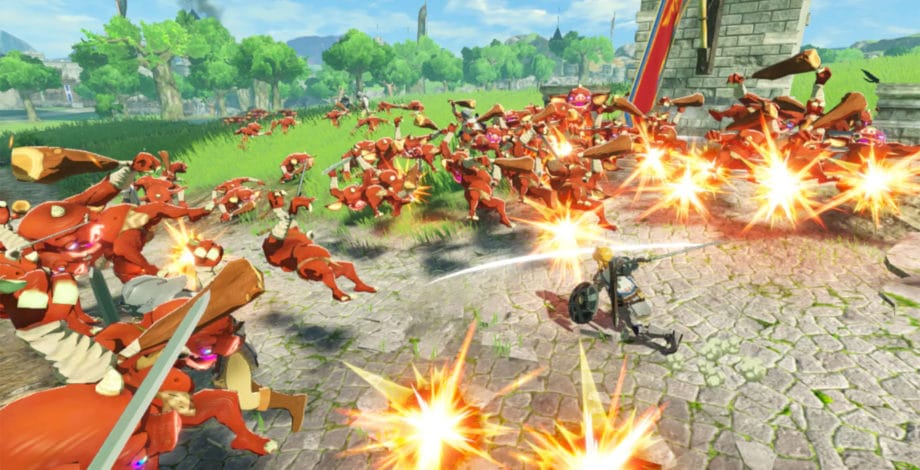 Although Hyrule Warriors takes place in the now familiar world of The Legend of Zelda: Breath of the Wild, albeit a hundred years before the events of that game take place, make no mistake it’s a Dynasty Warriors game. This franchise has been around for over twenty years now, described as a hack and slash set in feudal Japan, a period that saw the rise of the samurai.

Hyrule Warriors then takes the visual setting and cel shading palette of Breath of the Wild whilst adopting the hack and slash gameplay of a classic Dynasty Warriors title. The result is essentially Link and other characters from the Zelda world, hacking and slashing a whole lot of enemies.

It seems the kingdom of Hyrule can never get a break. What it wouldn’t give for some peace and quiet across the land, but Ganon has other plans, when a small Guardian travels through time, inadvertently allowing a part of Ganon to follow.

When King Rhoam learns of this, he drafts in the help of Link, who is always at hand to protect Hyrule, who in turn enlists the help of others, in a bid to once again rid Hyrule of a lurking evil threat, set to destroy them all.

It’s not long into the campaign that you realise what the main gist of this game is, and that is to fight. You start off as Link, and you are quickly confronted with a large number of enemies, which you have to defeat. Once you have done that, you move on to more enemies, who also need defeating. And thus a pattern emerges. Thankfully the game has a nice variety in foe, which certainly helps when dispatching them.

it's come to this huh, Christmas baubles in my weapons inventory.

The game helps further with a number of mid-level baddies, who are far stronger than the average sword fodder, who will probably need specific moves to get rid of them. All of this fighting ultimately leads to a big boss battle where, understandably, you will take a bit more time to defeat. So fight, fight, repeat.

It could easily be a monotonous process, but thankfully the game is keen to promote its story with some vibrant, engaging cut scenes, that at least give all your fighting some context. Perhaps the only issue with these is some of the high-pitched warbling of some of the female characters, with Zelda being one of the most offensive; it may be simply down to poor localisation, but her vocals come across more like a character from Little Britain. It’s no wonder then that Link keeps his trap shut throughout.

As well as the cut scenes, the game includes other elements to keep it interesting. You can add new members to your party, all of whom have their own unique moves, that you can swap in and out of. It’s a good idea to do this fairly regularly as there’s also a levelling up system, so obviously the higher the level for all concerned, the better.

Also on the map screen you can take part in side missions, which have their own rewards, as well as be able to level up everyone’s weaponry throughout.

All these extras help make the game a more balanced gaming experience than expected. If you want it to be somewhat of a button basher, then you can do that too, as there are a brain-numbingly large amount of enemies to fight, but the overall gameplay is more nuanced than that.

Of course it can get fairly busy on screen, which the Switch can often struggle with, but that’s only to be expected. To that end, the camera angles can become quite dizzying, despite having a lock-on feature for the more difficult baddies, as you swirl around in a bid to find and fight them.

Overall it’s a smart use of the Zelda license, that has no doubt benefitted from many a fan buying into it by way of extension of the franchise. And although the world is a familiar one, as are many of its characters, Hyrule Warriors: Age of Calamity is an altogether different beast, where if it’s a fight you want, you’ve got it.