In the early noughties, listeners to Londons XFM radio station were treated at weekends to shows presented by Ricky Gervais and Stephen Merchant. The Office was out, so the pair were building up quite a following. Regularly on the show they would involve their producer, Karl Pilkington.

They would often end up having surreal conversations between them, which helped the show become extremely popular. So much so that the Guardian sponsored podcasts between the trio led to the show getting in the Guinness Book of World Records for being the most downloaded podcast. Impressive indeed for a lot of twaddle. Entertaining twaddle, but twaddle nonetheless. 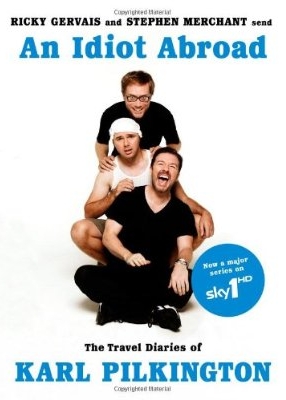 Karl is often considered the dumb straight man sidekick to the Gervais/Merchant dynamic. The two of them dreamt up an idea to send Karl to the seven wonders of the ancient world; Merchant claims as a way of broadening Karls limited horizons, whereas Gervais considered it the most expensive practical joke hes ever played  at Karls expense.

So with a small Sky crew and HD cameras, Karl set off on what many would consider an incredible journey. This diary written by Karl, gives even more detail as to what he really thought of his travels.

The upshot is, not a lot. Gervais is very quick to call Karl an idiot at every opportunity; not only is this cruel, its not entirely true. Karl has a very unique view on the world. His mental cogs certainly move in unusual directions, but theres always an element of truth in what he says. Unless hes talking about monkeys of course, then hes on very rocky ground indeed.

If youve ever heard Karl speak, youll probably find his deadpan drone of a voice squat inside your head as you go through his diary. This only makes it more entertaining; just make sure you get rid of once youve finished.

The only possibly disturbing point to Karls traveltribe is that you may find yourself at certain times agreeing with him; his senseless logic often makes you think well, he does have a point there.

He may not be in the same league as Bill Bryson, but it doesnt stop his alternative views from being any less entertaining. And if you ever find yourself in a corner of the world where a wonder may well be nearby, it certainly wouldnt do any harm to get Karls opinion on it before you go; lets face it, you wouldnt want to have a pants time and come back home to Karl giving you his told you so, didnt I? look.