A lot can happen in fourteen years. You can meet the love of your life, move in together, watch the entire box set of Lost, take up pottery because you both loved Ghost, have a child together, throw all the pottery you made together at each other, and then divorce over irreconcilable differences. And then have thirteen years to get over it.

It’s such a long time ago that when The Incredibles was released in 2004, Disney had not only yet to buy Pixar, the company that made it, but had yet to buy the entire planet. How times change.

This sequel then, has taken its sweet, animated time. So the question is, did a good thing come to those that waited? 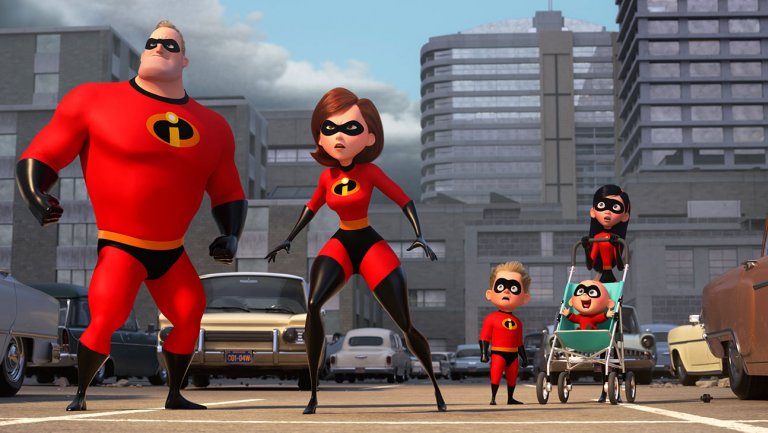 I really don't remember parking all the way up there, do you?!

The world is changing, and not necessarily for the better. The government dictates that superheroes are now no longer required to be either ‘super’ or heroic. It’s a money thing, or lack of, and they’re concerned about all the collateral damage the city takes when the superheroes go full tilt with their powers.

But when the Underminer goes about his villainous ways, Mr Incredible (Craig T. Nelson) and Elastigirl (Holly Hunter) feel duty bound to stop him. Their exploits catch the eye of business tycoon Winston Deavor (Bob Odenkirk), owner of DevTech, who wants to bring superheroes back and thinks he knows how. Right now though, he only needs Elastigirl, so Mr Incredible is put to work on parent duty to their kids Dash (Huck Milner), Violet (Sarah Vowell) and baby Jack-Jack.

Looking after your own kids is challenging, but even more so when your youngest is displaying all sorts of super powers.

Elastigirl isn’t exactly let off the hook though, when she finds herself up against the fiendish of foes – Screenslaver. It seems that if ever there were a time the world needed superheroes back, it was now. 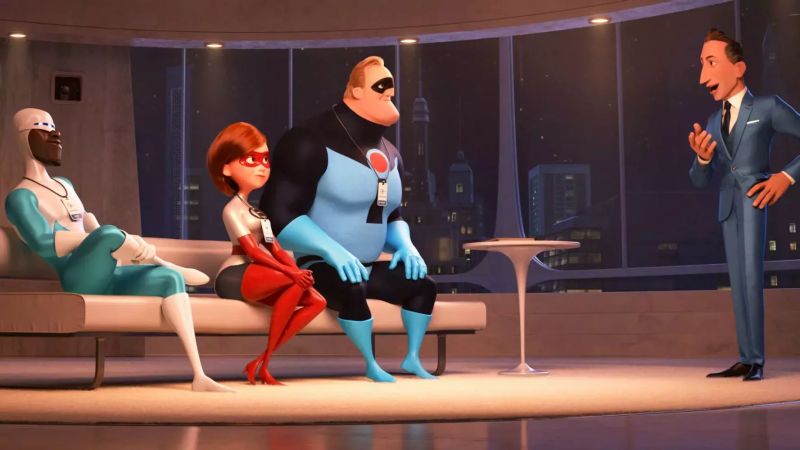 And with this policy, your entire family are covered

If ever animation can prove it has one over its live action buddies, it’s now. If a live action flick took up a story 14 years previous, with the same actors involved, everyone would look different. Even if some had paid to stay the ‘same’, thanks to cosmetic surgery, they would still look different. The marvel of animation means that the characters, as they do here, can look and sound exactly the same. Now that is pretty incredible.

What’s more incredible is what a fantastic job writer and director Brad Bird has done, once again. The story may not be the most original, but the execution is sublime. Even with all the advances in technology, it started to feel that we’d reached a plateau as far as what was possible on screen. If that is the case, then Bard has managed a terrific job of just making it look breathtaking regardless.

Even if you’re not one to usually marvel at what the sheer grunt power of tech is capable of, it would be difficult not to have some kind of geekgasm at what’s achieved here. And don’t even get us started on the glorious reflections.

Cleverly, it’s never revealed exactly what time period the film is set, so it can get away with a unique retro feel that works remarkably well. Visually then, it’s about as rich and sumptuous as you can get.

But Bird doesn’t leave it there, he compliments these delightful visuals with a strong orchestrated soundtrack with a hint of jazz. The result is pure joy to be seen and heard.

With animated flicks feeling as if they’re flagging a bit, Incredibles 2 has clearly been exposed to something to give it super powers all of its own, that allows it to leap and bound over all those in its way, making it really quite ‘super’ indeed.