If there’s one director’s body of work that leaves us with the Marmite effect, it’s Ben Wheatley; some of it is agreeable on the cinematic palate, while the rest leaves a rather disappointing taste behind. What there is no doubting however is that all of it has the distinct flavour of Wheatley.

Wheatley’s latest, which he also wrote, manages to start off in one camp, before heavily relocating to the latter. 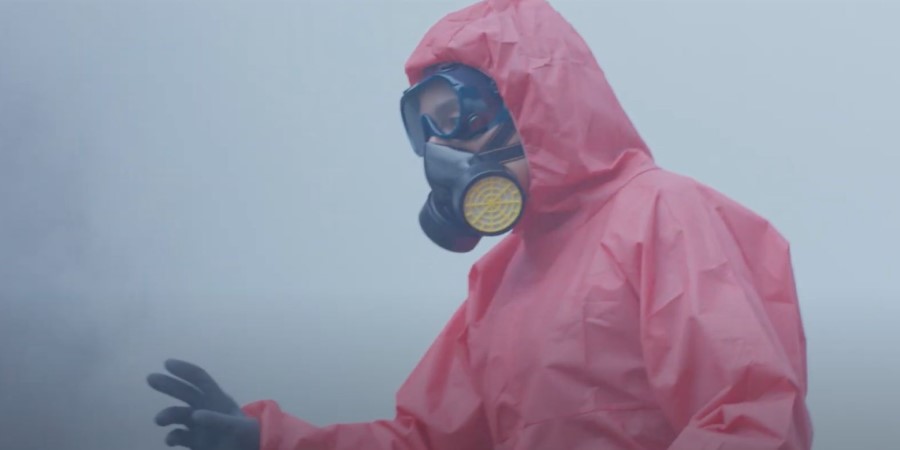 I'm sorry but I can't take this anymore, either that stinky dog goes, or I do!

Scientist Martin Lowry (Joel Fry) is on his way to a remote government outpost, in a forest outside Bristol, to continue his research. With the world still under the grip of a deadly virus though, even in the middle of nowhere as the outpost is, they have to take precautions, with a Martin undergoing a myriad of tests.

Thankfully he’s given the go ahead, and is allowed to travel to the site, where he is to assist colleague and friend Olivia Wendle (Hayley Squires), whom he hasn’t heard from in a while.

Accompanying him there is park guide Alma (Ellora Torchia), who informs him that it’s going to take at least two days of trekking through the forest to reach the site, which Martin wasn’t expecting. Still, the pair of them set off early in the morning, walking through the isolated forest, enjoying the surroundings seemingly untouched by the madness around the world.

It’s not long however before their pleasant trek takes a sinister turn, with inhabitants of the forest making themselves known making it a trip that both of them would prefer to forget. 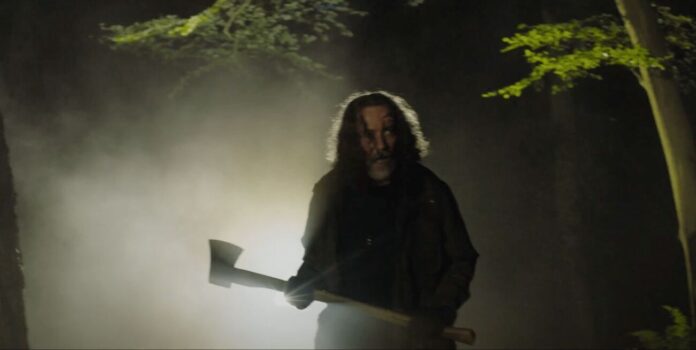 How many woodchuckers does it take you ask, smart arse, just this one!!!

British director Wheatley very much has his own style when it comes to his low budget output, making him an auteur of the current British film industry. It’s a style that, as pointed out earlier, isn’t to everyone’s tastes. Hollywood however, can appreciate his ability as a director, which is how he gets the opportunity to helm slightly more conventional projects, such as 2016’s Free Fire, the Rebecca remake for Netflix, and the forthcoming Meg 2 starring the Stath. All of this is on the proviso however, that he turns the weird shit down.

Of course that weird shit is piled on to his indie projects, as it is here, in alarmingly large quantities.

With a virus playing a major part in the film, it’s difficult not to see Wheatley drawing off of parallels in real life with the current pandemic crisis. He takes it and uses it by creating an allegory, one that sees nature intent on taking things into its own green-fingered hands; and with stories of both air and water pollution falling drastically in built up areas due to lockdowns, it’s easy to see where he got this idea from.

But being a personal Wheatley project, he can’t keep away from the weird shit. Once Martin and Alma get into the forest, it’s not long before the hippy trippy nonsense starts. Much of it is an intentional throwback to early independent horror flicks, with images of nature shot in slo-mo, or filtered, or both, accompanied by a jarring soundtrack.

At one point Wheatley takes his inspiration from an unexpected source, Spielberg’s 1977 classic Close Encounters of the Third Kind, as he pays homage to its iconic scene communicating with alien life through an entertaining music and light show. But sadly it doesn’t quite have the same impact, set as it is in a wood just outside Bristol.

On the plus side, it’s good to see Fry out of a Toga and dipping his toe - which, incidentally, does some fine acting of its on in the film – into a more dramatic role. However, don’t be surprised if you get the urge to suddenly buy something on Amazon though, as one of his other current gigs is voicing their ads in the UK.

Another plus is Reece Shearsmith; clearly Wheatley regular, the excellent Neil Maskell wasn’t available for a role that feels written specifically for him, but Shearsmith, who has worked with Wheatley before, takes a lot of his experience from playing dark characters in the likes of The League of Gentlemen and more recently with Inside No.9, with a deliciously shadowy role.

But despite these welcome new faces, there’s no getting away from the film’s central premise that is all too flaky. Maybe it’s just too soon for a film resembling the current predicament, or perhaps it’s simply a case of Wheatley being all too self-centred, or more specifically being allowed to be, by catering once again for an audience of one yet again – himself – who probably could see the wood for the trees, but just chose to ignore it, with a film that manages to make camping even more unappealing than it already is.