The name Diane Kruger is a familiar one; not only did she make an impact in Tarantino’s Inglorious Basterds, but also starred in the US remake of Nordic noir series The Bridge, amongst other screen credits.

It’s no surprise to learn that she’s German born, fluent in German, French and of course English. What you may not know however is the fact that this feature, of which she has appeared in over 30+ to date, marks her German-language debut. Ja! 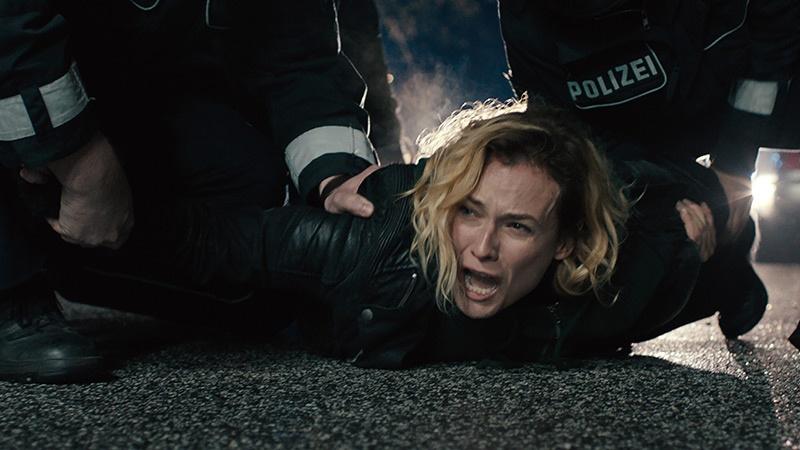 The fact that Turkish born Nuri (Numan Acar) had been involved in drug dealing wasn’t an issue for Katja (Kruger); so much so that they actually got married in prison, whilst he was serving time for his crime.

Some years later, the couple are still together, have had a child, and Nuri has cleaned up his act.

One day Katja leaves their son with Nuri, whilst he is at work, while she goes off and treats herself to a spa day. When she returns to meet them both in the evening, she finds the road is cordoned off and police everywhere. The closer she gets it dawns on her that there’s been an attack, and her family have been involved.

When the police realise who she is, they take her to one side and explain that a bomb exploded outside the building her family were in, and both of them are fatalities from the explosion. After being questioned by the police, Katja believes she spoke to one of the bombers, and soon enough the police have suspects in custody.

But even with the justice system going through its paces, Katja starts to believe that the only outcome she could be satisfied with is one of revenge.

It's not quite the Popeye tattoo I wanted, but it'll do.

With immigration being such a volcanic hot topic currently, it’s no surprise that filmmakers are returning to the subject for material. Although not based on specific real events, director and writer Fatih Akin is keen to remind audiences that although this is a work of fiction, it’s not far off what’s actually happening, particularly in Germany, where this film is set, where a number of racial terrorist attacks have taken place by neo-Nazis.

His story here however is heavily focused on his lead character, played by Kruger, who pretty much carries the entire film. To her credit, she gives a virtuoso performance as the grieving wife and mother Katja. But with so much of the spotlight on her, the story slips a tad too often underfoot. Is it a courtroom drama, a thriller, or a revenge flick? Most of the time it feels undecided, so resorts to attempt to be all three, with mixed results.

Still, Kruger is hugely watchable, which is probably why Akin almost always, wisely, keeps the camera on her at all times. Kudos to him too for getting Josh Homme, main Stone Age Queener, to score the film, which he does with aplomb.

Akin achieves two things here: he not highlights the madness and mindlessness of terrorism, but also how talented Diane Kruger is, whatever language she speaks.