Musicals, not only are they unquestionably the worst film genre but they are the devil’s work. Under no circumstance should a character ever feel compelled to express how they’re feeling in song. None whatsoever.

To put that it in some kind of context, watching a really bad Adam Sandler film (which basically means, any Sandler film), is far more preferable than suffering a musical.

There are of course exceptions, with the two most notable ones being The Wizard of Oz and Grease. But generally the rule of thumb is if you’re a fan of musicals, go to the theatre.

Of course there will be instances when a theatre show gets so much attention, a film company with dollar signs in their dark, empty eyes will feel the need to make a film version of it, as is the case here, with Lin-Manuel Miranda’s first Broadway hit In the Heights. 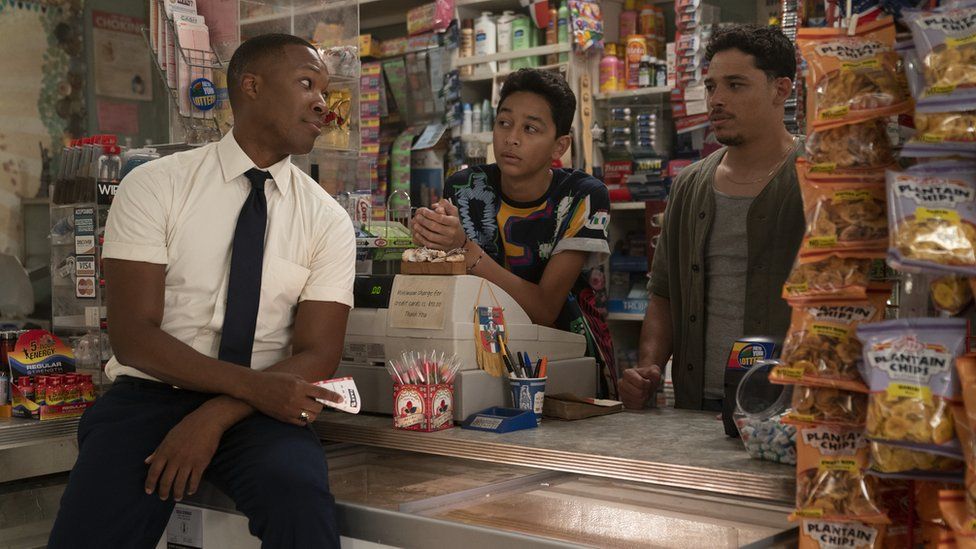 I'm the local music inspector and we've been getting some worrying reports about songs being sung here that are really lame...

Nestled in the uppermost part of New York City’s Manhattan borough, is the vibrant Latin neighbourhood of Washington Heights. The local bodega is run by Usnavi (Anthony Ramos), who dreams of returning to his home country of the Dominican Republic, where he hopes to run the beach bar his father once owned.

He is not the only one of dreams of moving out of the area, as the community can see the effects of gentrification happening all around them, with other businesses selling up and moving on.

Vanessa (Melissa Barrera) is another one with dreams of moving on; she currently works in the nail salon, but has aspirations in fashion design. Although he hasn’t come out and said it, Usnavi is smitten with Vanessa big time, but with both of them seemingly moving in different directions, time is running out for the pair.

How many times do I have to tell you guys, you're supposed to be spelling S O S...

In the Heights is the worst kind of musical in that the majority of the narrative is delivered in song. This means that even the most mundane dialogue has an orchestral bed supporting it. And although it may sound strange, considering it is a musical and all, but the film is way too song heavy.

The real issue is that none of the songs are stand out bangers. Even the dullest of film musicals has one up its sleeve, that despite your efforts, will live in your head like an unwelcome virus for a day or two. Not so here.

There’s no denying that Jon M. Chu’s adaptation is energetic, but it’s akin to a sugar rush, delivering an unnatural high that is nothing more than empty calories. As proof, there’s a test you can take as the credits role; sing one of the most memorable songs in the film, try it. OK, then just hum it. You can’t. The film is bursting with lyrics and music, but there is no cohesion between them, often feeling that they’re at odds with each other, with no memorable hook or melody for that matter.

At one point, the two protagonists kiss, which is a welcome moment, not for cementing any kind of relationship, but the fact that it’s an all too brief respite from either of them singing.

Forgettable music aside, Cho attempts to keep things interesting visually, with the stand out set piece being set in an outdoor swimming pool, with more than a nod to classic Busby Berkeley numbers. And although others set on the streets of Washington Heights themselves, which have a feel of the late, great Alan Parker’s 1980’s Fame about them, there aren’t nearly enough of them.

And although it’s a colourful world, the characters within it are pretty dreary. Vanessa herself is constantly whiny, looking off into the distance dreaming of something better. We know how she feels.

That said, Ramos is extremely charming as Usnavi, as he holds the whole thing together.

Although Miranda (who also appears here in a small role) has become a darling of the theatrical musical world, mostly down to the success of his show Hamilton, this film version of his Broadway show certainly has a feel of community, but lacks real heart. Oh and memorable songs.

With its unappealing characters and completely disposable soundtrack, in the Heights is a veritable low point in film musical history. And that’s saying something.