Reunions of any kind are a big mistake; after all there’s a reason you haven’t seen each other for all these years. But curiosity can be a strong draw, as is the idea of meeting up with those you haven’t seen for an age, and hoping that your life is considerably more attractive than theirs.

There’s only one thing worse than discovering that everyone else has fared so much better than you, and that’s to fulfil an ill thought out promise to return to your friends to once again address an evil presence, as happens here in this clownish sequel. 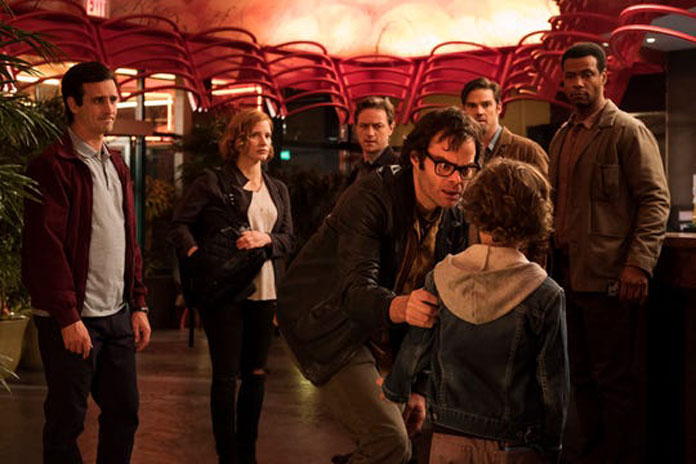 It looked like The Losers of Derry had defeated evil in their small home town in the late eighties. Just in case though, the group of young friends made a pact that if it were to return, so would they all.

Twenty seven years later and Mike (Isaiah Mustafa), the only one of the gang to remain behind in Derry, is having to make the call he hoped he’d never have to make. One by one he contacts the members of The Losers – Beverly (Jessica Chastain), Bill (James McAvoy), Richie (Bill Hader), Ben (Jay Ryan), Eddie (James Ransone) and Stanley (Andy Bean) - now adults, to remind them of their promise to return if ‘It’ did. And ‘It’ certainly has.

So leaving their lives behind, they return to Derry, to once again confront the familiar, painted face of evil – Pennywise (Bill Skarsgård).

So then, chapter two is effectively when the grow-ups turn up. It’s certainly the perfect counter-balance to the first, with the insecurities now flourishing in the adults, as they once again face their worst nightmare.

Andy Muschietti, who so assuredly directed the first instalment, returns for this one too, and does well with his more experienced cast. Visually it fits in with the first, including some very pleasing cinematography, and the script has some nice moments of comic interplay between some of the characters, most notably involving that of Bill Hader’s.

It has a number of deflatable issues however, one of which is in the development of the characters in adulthood. Although it’s great to flesh out these familiar characters at an older age, it does feel it’s at the expense of scares. Overall the film is now less of a horror film and more of a coming of age flick with a few jumpy bits. There are no real major set pieces that will have you squirming in your seat; instead there are just a few scenes that, the majority of which, rely on CGI to deliver the goose-bumps.

The problem may well lie with the film’s length; being just ten minutes shy of the three hour mark, Muschietti is keen to pad out with as much story and character interaction as he possibly can, which is sadly far too much.

The key to a good horror is that once you have your audience in your grasp, you go full throttle and don’t let them go. Here, it’s more of a gentle wave of fear that rolls in and out in a timely fashion, giving the audience far too much time to get distracted and have their attention wander. Sadly this dilutes the effectiveness of Pennywise as an evil presence, making him less menacing than Sideshow Bob.

What works well however is the occasional flashback to the young Losers; they did, after all, do most of the heavy lifting in the first chapter, so it’s only right that they share some of the limelight with their more famous counterparts this time as well. That said, the likes of Chastain, McAvoy, Hader etc, do well to get up to speed, making the transition into adulthood a smooth one.

This second chapter certainly rounds off the story neatly, albeit far too long-windedly, but ultimately there’s just too much clowning around of the wrong kind, making it a far less scary proposition.