For a lot of people, their interest in golf starts and ends with Tiger Woods. But with the stars career and personal life deep in the rough of late, the sports golden boy has a tarnished reputation. So stepping up to the tee is John Daly, who many regard as the fans favourite.

In the same sense, hes also a bit of a mans man; hes certainly never had the clean cut image that was slapped on Woods. Daly has confessed to being an alcoholic and a gambler; in fact he claims to have lost up to $60 million in the last fifteen years. Oh and hes been married a few times too. So although the chances of him becoming the sports next poster boy are slim, he does know how to swing a club.

Obviously, if youre looking for something with the cutesy value of Everybodys Golf, then this isnt for you. Daly is a no nonsense golfer and the game with his name on is the same. Its not very pretty either; in fact theres a feeling of one of those quaint simulated golf programmes of yesteryear about it. Visually its about as basic as you can get. The only thing striking about the game is Dalys trousers. Where it picks up points however, is when you get your hands on those clubs. 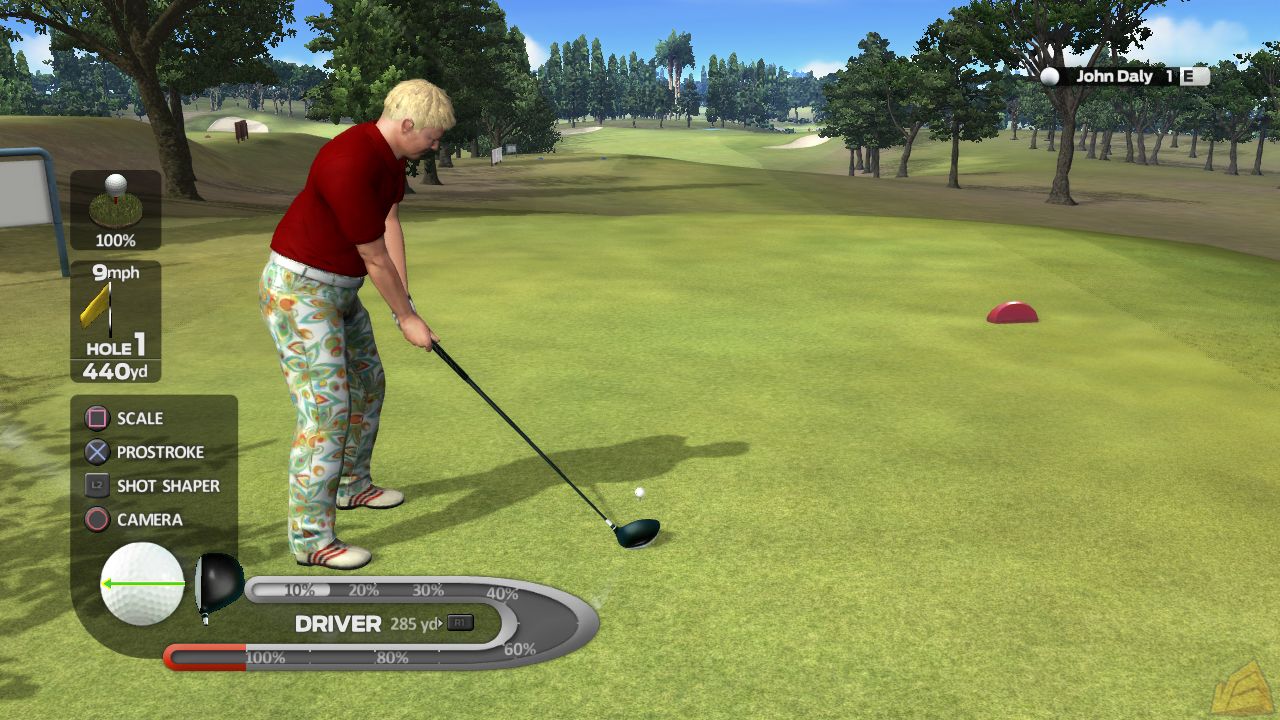 You know, there's nothing quite like the feeling of playing in your PJ's.

For a Move compatible game, it thankfully doesnt feel tacked on like an afterthought. Theres something rather comfortable about using the Move controller; its rounded body feels more intuitive in the hand, and certainly feels more like gripping a real club than say the Wii controller. However after a few swings, the experience didnt feel all that different from swinging the Wii controller around playing Tiger Woods PG Golf Tour 11. Real golfers may pick up on the nuances of the control, but if youre non golfers like us, its über accuracy may pass you by.

Having seen some Move games create a 3D rendering at the end of your Move controller, we were half expecting to see a club attached to the end of ours. It kind of makes sense for a golf game. But here its nothing more than a souped up Wii controller.

It doesnt matter if you dont have the Move controller (as the 360 and PC versions clearly wont), as using the joypad still works well.

Its a shame the same cant be said for the games options. After the training section we wanted to jump straight into a tournament. We couldnt. To unlock tournaments in Career Mode, you first have a fair few challenges to get past. And by few we mean four; driving test, approach ordeal, in the hole and match-up. We managed to sustain our interest long enough to reach the final hurdle before throwing in the sponsored towel. Seriously, is it too much to ask to be able to play tournaments from the off? Yes it is with this game.

Although the blurb on the back claims that everyone can play, it would certainly struggle to hold the attention of a casual gamer for any length of time. In fact wed go as far to say that this would be better suited to the hardcore golfing gamer and/or the real golfing crowd. You wont find any Frisbee golf or any other mini-game for that matter here. It takes the sport of golf seriously. A little bit too seriously for our tastes. But if you have a real passion for the game, and would like to recreate it in an indoor fashion  particularly taking advantage of the Move controller for extra accuracy, then Long John Daly is your man.