When it comes to saving the day, everyone loves a superhero. But the truth is, no one really gives the villain enough credit. After all, without them, what would be left are a bunch of characters posing in tight Lycra, showing off how ‘super’ they all are.

The villain gives the superhero reason to exist. So it’s only fitting that this film by Todd Phillips celebrates one of the all time greats from the world of DC. 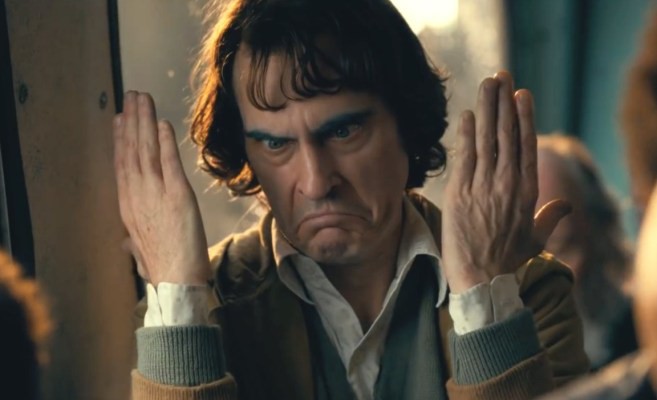 I don't know who owns these hands, but they're just not helping.

Arthur Fleck (Joaquin Phoenix) is one of life’s clowns – literally. The problem is, he’s going through a bit of a rough spot, career wise. He’s not helped by the fact that the city of Gotham is crumbling, suffering as it is from several social issues, and its people aren’t happy. And there’s nothing a clown can do about it.

So with the clown business in the doldrums, and the fact that he’s still living at home with his mum Penny (Frances Conroy), he thinks a career change would help. So he decides he wants to be a stand-up comic. He suffers from a rare mental issue, where he laughs maniacally when he feels vulnerable or threatened, which he thinks might help the act.

But if Arthur thought that clowning around gig was tough, he’s not seen anything like stand-up. And with the city in turmoil, and Arthur’s personal life on a slippery slope, there’s very little to laugh about. 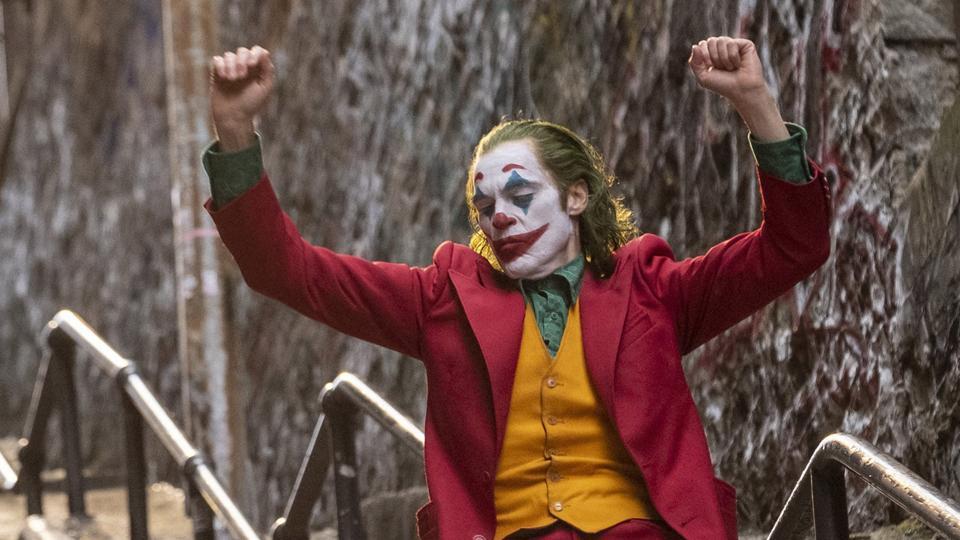 I'm telling you, this deodorant just makes me feel so alive!!!

Considering the billions of superhero origin stories we’ve had to endure over the years, it’s refreshing that we get a take on a classic villain.

The Joker first appeared, in print, in 1940, in the comic Batman. It wasn’t until the 1960’s however, that he took on broader appeal in the cult TV series of the same name, with Cesar Romero portraying him on the show.

It was then Jack Nicholson’s turn to play him, when the character made his big screen debut in Tim Burton’s 1989 Batman, which was joined by Heath Ledger’s memorable take in 2008’s The Dark Knight. And although Phoenix joins an illustrious bunch, this is a different kind of Joker entirely.

Although the character is a firm DC favourite, this isn’t your by-the-numbers superhero flick. In fact, this film is more connected with Hitchcock’s Psycho, and could be fairly deemed a spiritual remake, as if Arthur Fleck was cinematically twinned with Norman Bates.

Both protagonists become their relevant alter egos through their relationships with their mothers. It’s this maternal bond that is ultimately the catalyst for change within both characters. The fact that both share mental illnesses is also relevant. It’s far from being an excuse for their behaviour, but it certainly contributes to the madness that descends upon them both, paving a way to the evil they do.

Certainly Phoenix’s Joker is entirely stripped of his comic persona. He is a human, struggling with his mental health, in a world that doesn’t care for him on any level. In short, he is a victim. When he isn’t being bullied in some fashion, he’s being ignored, which can hurt even more. There’s a spark of hope however, when Fleck realises that he gets noticed when he behaves badly. So when he does worse things, and more people notice on a wider scale, it makes sense that he actually feels more human inside, more alive.

Phoenix captures this journey with impeccable precision. Just as well he has plenty of time and space to play with; with no vain superheroes to get in his way, all other characters are relatively minor, allowing Phoenix to truly revel in his transformation. No wonder he won Oscar gold, and deservedly so.

It also feels somewhat of a transformative journey for director Phillips. Having helmed the likes of Old School, Starsky & Hutch and two Hangover flicks, he comes of age here with a mature and thought-provoking approach to both this character and genre.

He has made a savvy and absorbing psychological drama, which is brought to such vivid life by a breathtaking performance by Phoenix. By stripping back the comic book clichés, including making Gotham look like any other city, Phillips focuses not so much on the origin story of a villain, but on the fragility of a man, mentally and socially, and how little control he has on his own destiny.

Kudos should also be given to Icelandic composer Hildur Guðnadóttir, who delivers a magnificent soundtrack, which perfectly scores the birth of the Joker, from sombre to sinister, underlined with an absorbing edge.

Joker isn’t just another superhero film, it’s far more than that. It’s brave and bold cinema, showing that not all characters from the world of comics need to come from the same generic mould, and that’s no joke.