Jumanji: Welcome to the Jungle

Twenty three years ago, Robin Williams starred in the family friendly Jumanji. Although it didn’t go down well with critics, audiences loved it and made it the 10th highest grossing film of the year.

In 2005 it’s spiritual successor Zathura: A Space adventure was released; like jumanji it was also based on the work of author Chris Van Allsburg, who wrote the source material picture books.

Finally though, a bona fide sequel has materialised, with Dwight Johnson and chums taking on the game.

The script says to just wait here a while. So i guess we wait...

In the room they discover an old video gaming console, which they decide to power up. The game inserted is called Jumanji, and although it looks pretty basic by today’s standards, they all decide to have a go to pass the time.

Once they press ‘play’ however, all four of them are magically transported to another world – that of the game’s – and now take the appearance of characters within the game. Spencer has become the muscular explorer Smolder Bravestone (Johnson); Fridge is now zoologist Franklin Finbar (Kevin Hart) and Martha is martial arts expert Ruby Roundhouse (Karen Gillan). Bethany seems to have got the short straw though, as she has become chubby male cartographer Sheldon Oberon (Jack Black).

They are told that they have a quest to fulfil: to retrieve a magic jewel recently stolen and return it to its shrine. Sounds easy enough, until they learn that the evil Russel Van Pelt (Booby Cannavale), who stole said jewel, will do all he possibly can to stop them. Just as well they all start with three lives, as they’re likely to need them all if they’re to survive the game. 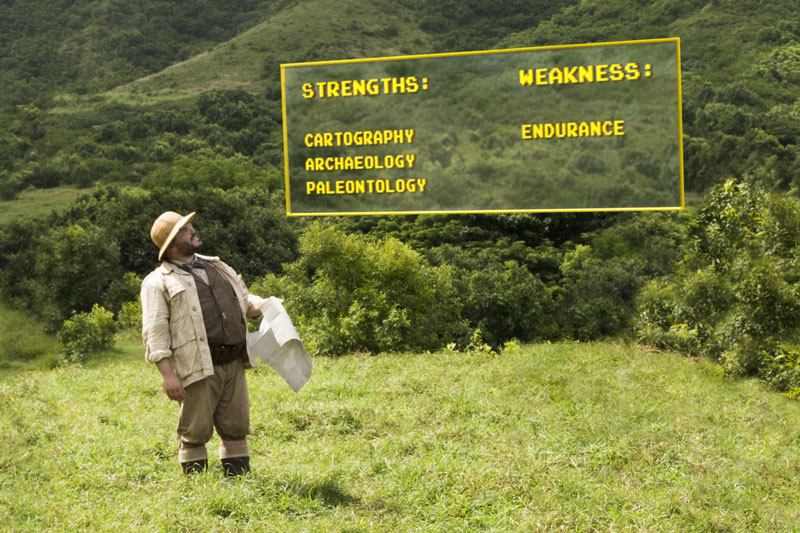 When the original film was released, the game played was a board one. With the advances in technology it made perfect sense to set this sequel in a video world. Not only that, but it allowed the characters being played in game to be portrayed by Johnson et al. It’s this premise that plays to the film’s greatest strengths; all four leads get to royally ham it up to good effect, all giving some gleeful and playful performances.

Its major weakness however is its script. The four main roles may be fully developed, but the story is terribly flimsy, offering nothing in the way of originality. You have to feel for poor old Cannavale, whose role as a baddie is so pointless, it feels more texted in than phoned in.

Also, considering there are four writers credited for its screenplay, you would think amongst them they could come up with lively, funny dialogue for the talented cast. But no. At best it’s fun, but with a little more work, could have been so much funnier.

There’s also a hell of a lot of green on screen; not green screen per se, although of course there’s buckets of the stuff, but the jungle setting gets tired quickly, with nothing more than a bland sea of green on view pretty much throughout.

Director Jake Kasdan, who doesn’t have the greatest of track records to date (responsible for both 2011’s Bad Teacher and 2014’s Sex Tape) appears to be completely overwhelmed by the concept, and struggles with getting the most out of a promising premise.

Some nice performances then, sadly lost in a generic script that should be bitterly disappointed in itself. If there is to be a sequel, it needs to raise its game considerably.