Nothing beats a great holiday. You know, one of those on a sun-drenched island somewhere, where you can flip flop about the place in garish clothing and it doesnt matter what the locals are saying about you behind your back, because theyre talking in a jibber jabber you dont understand.

Playing Just Cause 2 is a bit like this, but with guns.

The original game released in 2006 found Rico Rodriguez, a CIA Black Ops agent, bringing down a nasty dictator on the tropical island of San Esperito. Well, with plenty of air miles under his belt, Rico has saved up to visit the Asian island of Panau. And although its not quite a holiday for him, he has a hell of a lot of fun bringing down the islands evil dictator.

Anyone familiar with the first game will no doubt recall how incredibly large its playing area was. The sequel is just slightly bigger at 400 miles ². Thankfully there are plenty of ways to get around the place, including cars, bikes, boats, helicopters and planes. Oh and thanks to the return of his signature equipment, he can also use his parachute whenever he likes. 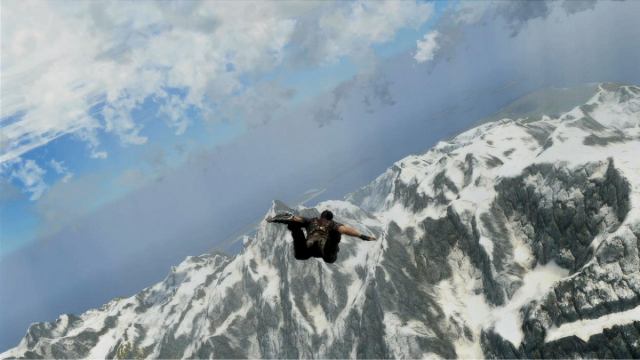 For those who havent played the game, its GTA on a Thomson package holiday. Rodriguez, who has the touch of the Antonio Banderas about him, can roam pretty much wherever he wants around Panau. As long as its not inside that is. But when the outdoors is so breathtaking, theres no real reason to be anywhere else.

And as well his parachute, hes also equipped  from the off this time  with his very tidy grapple. This works pretty much in the same way as the one the Bionic Commando has. Cant get over a wall? Grapple over it. Vehicle getting away and you cant be arsed to run after it? Grapple onto it. Want to get to the top of a very tall building without using the lift? Grapple your way to the top. You can get a little creative with it too. You can pull snipers down from their high up sentry positions. Or attach soldiers to passing vehicles. Or you can pull cars out of ditches with a tractor; that last one might not sound that exciting, but it is one of the early missions so therefore has to be done.

The grapple does take some getting used to though. When first presented with a wall, with the challenge set to get over it, it took us a good five minutes to work out how to do it. And considering its a one shoulder button command, it shouldnt have been that difficult. It turns out its more of a tap than a push. Well know for next time.

Just after that section you get to take Rico on a bit of an explosion-fest, blowing up things left, right and centre with great satisfaction. Sadly though, this is not the shape of things to come. This leads us to our first major gripe  weapons.

If were playing a game where were not only expected, but openly encouraged, to shoot lots of stuff, we want the ammo to do it. Just Cause 2 drip feeds it to you like rationed nylons during the war. You can easily arrive in a new settlement, only to have the local military to start using you as target practice; in reply you can shoot your load in seconds, leaving you with nothing but blanks to see the enemy off with. This of course, is as about as effective as shooing them away. Dead enemies do leave some of their ammo behind, but if its not for the weapon youre already carrying, its all a bit fiddly.

As is the process of changing weapons during battles; it feels like youre constantly tapping out SOS in Morse code on the directional pad, in the vain attempt that something handy will pop into your mitts in your hour of need. It doesnt of course. You die. Which leads us to our next major moan.

Having put in over 12 hours plus playing the game, we still only had the same quarter of life that we started with. However, we had progressed far enough into it to unlock level 3 baddies onto our feebly protected ass. There are life stations dotted around the place, but arent very easy to use whilst in battle. Dont be surprised if a soldier or three are ganging up on you in a dark corner somewhere, taking away the very life you just topped up with. Boy did that make us angry.

While were on our roll of moan, we may as well mention the saving situation. The simple answer is, it doesnt, unless youre on an active mission. Early on we took a tour of Panau, mostly on foot, then by boat, then by scooter...we travelled for miles. All we were doing was taking in the scenery (more of which later), soaking up much of the islands atmosphere and suddenly walked into a heavily-armed military base. Obviously with our tightly rationed ammo, we were toast. The game then sent us back in time, spawning back well before we began our little adventure. 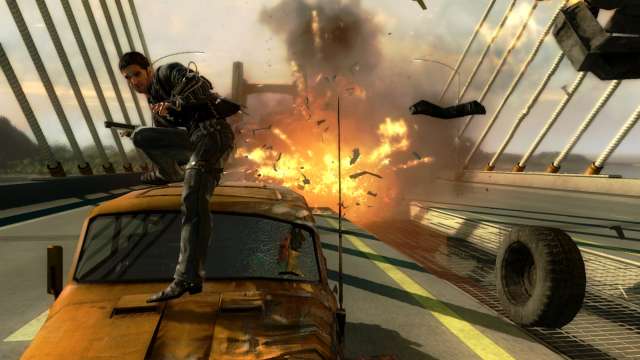 Whoops, there goes another Toyota.

On top of all this, its also bugged to buggery. On one of our journeys, we decided to let the helicopter take the strain. We popped over to a small island settlement we had yet to visit, landing on the beach so as not to arouse military suspicion. We went for a walk, got bored, and then decided to get back on our ride. It wouldnt let us. It was in front of us, but wouldnt let us in. We came across the idea that it was on too much water and that it might need to be on more land. So we swam out to a nearby barge, hijacked it, manoeuvred it into position and nudged the copter further onto shore. Feeling rather smug with ourselves we went to reverse the barge away from the flying machine so we could be on our way. But there was no reverse on the barge. We now had a barge and a helicopter on a beach, neither of which we could use. So then we hijacked a second barge, to dislodge the first, so we could use the helicopter. And we did free the beached barge, but the helicopter still would not fly. And all this in twenty very human minutes; twenty minutes we will never see again.

Despite all these moans and groans though, we couldnt help but enjoy playing Just Cause 2. The setting of Panau is simply breath-taking, taking in vast mountain ranges, deserts, snowy vistas and mile after mile of the bluest waters youll ever see, all rendered in remarkable detail. Also, the lighting and weather people did an incredible job, with the kind of sunsets you only see on postcards, as well as sand that Brighton beach would kill for.

The missions are also of a nice variety, and not nearly as mundane as other sandbox-style games we could mention. It angered us that there was no auto-aim with which to take out the myriad of baddies that had no such difficulty aiming at us. And yet still we played on. We were also disappointed to see the now ubiquitous girlie show locale, even if it was a mile high in the air. And yet we played on. We werent even that disappointed that there were no online elements whatsoever. Sometimes a player just wants to go solo and forget about the rest of the cyber world.

Time and again we were left gobsmacked at the truly amazing environments; we even enjoyed just swimming around, as it probably boasts the best swimming physics of any game. Obviously not really something you can shout about on the box, but we were suitably impressed.

We just desperately wanted the broken bits to work as we wanted nothing more than to book our trip to Panau on teletext and get the next flight out there.

On balance the game does more wrong than right  but only just. Certainly its most annoying bits are easy to put right. We just wished that that they had been fixed before its release.

If youre looking for a GTA experience that gets you out of the city however, hitching a ride with Rico Rodriguez is a definite alternative. Well be keeping a very close eye on Ricos next destination, thats for sure.