A lot was said of the original Kane & Lynch game, nearly all of it bad. When a sequel was announced, the news was met with a heady mix of surprise and bewilderment. But Danish developers IO Interactive promised, after licking their many wounds, that they would definitely try harder with the sequel. But the question remains: have they stayed true to their word?

Lynch is now living the life in Shanghai with his girlfriend Xiu. He gets wind of a big job, so he calls his old mucker Kane to see if hes interested. With both men not exactly rolling in it, Kane decides that one more job, especially one of this size, would be enough for them both to comfortably retire. Kane finds himself immediately getting his hands dirty with Lynch, and before he can say duty free, the pair are waist deep in trouble, just like the bad old days.

The first thing that grabs you about the game is its new look: Its been described as lo-fi, as all the action is presented through the lens of a camera, in the style of documentaries and user-generated content. Theres an impressive grainy quality to the image, that some might not appreciate; after all, if youre one of those that has upgraded your kit to the HD hilt, do you then want to play something that looks like its degrading your picture quality?

The real problem is however, not only are we never told who is carrying the camera  or why, the two lead characters dont even appear to be aware that its constantly in their faces. So it begs the question: what was the point? It has about as much relevance as it would have been to have the entire Mamma Mia! Soundtrack play on a loop throughout. Theres just no connection between the new visual style and the story the game is telling.

Unfortunately it doesnt end there. When you start to run as your character, the camera adopts a realistic wobble. This would be acceptable, say, for a war flick, following its new recruits through the trenches; but used in a game like this, it just makes the player giddy and unsettled. If we wanted those sensations wed rather have spent the money used to buy the game on a day out at Alton Towers. 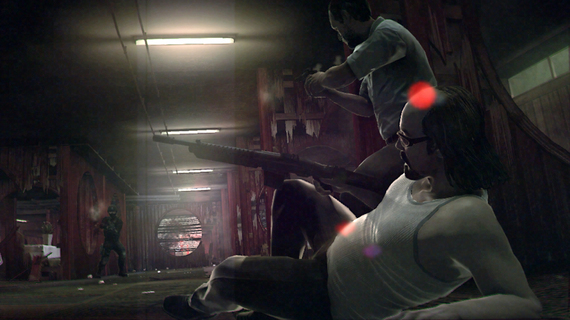 What did I tell you, it's seen as being really impolite if you don't tip here.

To its credit, the relationship between the two main protagonists is a believable one. These guys are at a point in their lives where they really are too old for this kind of nonsense. They are not attractive  physically or personality-wise; neither of them appear to have gym membership; and personal hygiene doesnt seem to be a priority for either of them. So not your stereotypical characters then; in fact, theyre more likely to be your stereotypical gamer. Not you, of course, but you know, probably gamers you know.

Theres a nice variety of ways to play the game: single-player, online co-op and multi-player. Unfortunately, the single-player is a weak component. Not only is it far too short, the levels you play through are repetitive and mundane. The most impressive is when youre on board a helicopter, shooting up a building and its inhabitants, as well as taken on a couple of other helicopters at the same time. Not exactly original (GRAW, COD etc), but it certainly livened up a predictable run through.

Theres actually a section thats not at all for the squeamish; were not referring to the use of bad language or the torture scenes, its worse than that. Nudity. Yes, for far too long, Kane & Lynch are running around a shopping mall in their birthday suits. Thankfully their giblets are pixelated, but there really is no need to see naked men in video games.

There were rumours that the multi-player was worth admission alone. Although we could see that they were trying something a little different, which can only be applauded, it was let down by the execution. Were never impressed when you shoot someone a zillion times, and yet they still dont fall down, for instance. There were also times when some opponents appeared to be almost teleporting around the map, which made us tire of the experience all the quicker. Different? Yes. Better. We dont think so.

Overall, IO Interactive did deliver a better game than the original. Sadly, thats not saying much. Making an average game rather than a mediocre one is a step up, but they were still a million miles away from producing a truly outstanding one.

Perhaps now, after two attempts, Kane & Lynchs dog days will be well and truly over.