If you know the name Kate Bush, then chances are you're of a certain age. And a way of making yourself feel even older is knowing that there is a generation or two out there who have never even heard of her before.

Things had been fairly quiet on the Bush front since her 2005 album Ariel. But this year has seen her release not one but two albums: the first being Director's Cut which saw Bush revisit some of her tracks from The Sensual World and The Red Shoes, and this one.

50 Words for Snow however is all new material, featuring seven tracks that lasts a total of a few minutes shy of an hour in length. You don't need to be Carol Vordeman to work out that some of these tracks go on a bit. This is your first clue as to what to expect with this album. 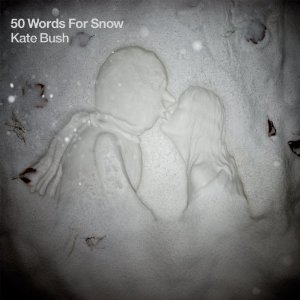 Easing you in gently is 'Snowflake'. After an undeniably beautiful piano intro, a voice appears; it is deep and almost ghoulish in tone. It doesn't sound like the Kate Bush we would normally recognise. What gives it away that it is indeed her is the theatricality of her delivery. It's a track that has a jazz sensibility at its core, with Bush supplying some odd sounding vocals over the top. It's understandable that there's a snow theme at work here, but does she have to sound like Aled Jones singing 'I'm Walking in the Air'?

Moving on from jazz, 'Lake Tahoe' has an operatic opening to it, before another bed of jazz arrives. It's the type of track that would work well live, say, in an intimate Parisian bar at 3AM on a Sunday morning. You would definitely need to be in the mood for it; and discovering quite when that mood would be might prove problematic. Sadly there's a lot of it here too, coming in as it does at just over eleven minutes long.

But that's just a warm up for the epic 'Misty' that lasts 13.32. It feels twice as long. At this point it's difficult to tell where one track ends and another starts. It's pretty in places, but boy does it go on a bit.

There's a definite change in pace with 'Wild Man' which tells the story of a Yeti. Bush narrates the tale in a hushed tone, which is almost comical, sounding as she does a little like Jemaine from Flight of the Conchords. Still, at least the mood is a little more upbeat.

With the arrival of 'Snowed in at Wheeler Street' comes Elton John, although it's doubtful that even his own mother would recognise him. What follows is a story about a couple who get separated during the war, and struggle to find each other again. It's possible that it's supposed to come across as this epic historical tale, but sadly ends up being the most pretentious karaoke duet of all time.

The most upbeat track on the album is the title track itself, which features none other than Stephen Fry going through the entire list of...50 words for snow. It's reminiscent in places of Lemon Jelly's 'Ramblin' Man', and not just in the length of the track, only with Bush screeching how many words Fry has left in this melting countdown.

The finale for the album is the delicate track 'Among Angels' that just feature's Kate singing against a gentle piano. It's not terribly cohesive, as it just floats away with no real destination. When it finally ends, there's certainly no sensation of loss.

You can tell that this album is nothing more than a labour of love, and is not deemed to be a truly commercial venture. The extraordinary lengths of the songs alone prove how unfriendly they would be for radio.

There could be a valid claim to make that Bush is an artist, and that she has a 'vision' that isn't supposed to be readily accessible to the masses.

At the same time however, that could be countered with the fact that this could be deemed overly self indulgent, drowning in a sea of pretentiousness. It feels like everything has to be on Bush's terms, with no thought at all for her audience.

It's an album that is truly hard work to listen to, and to a certain extent, to take all that seriously. You would be hard pushed to think of a suitable time or reason to put it on other than if you struggle with sleep; It will either help you drift effortlessly away on a cloud of ZZZzzz's, or simply just bore you into slumber.

Other than that, you may just get away with playing it in the background after a dinner party whilst the dessert wine is being served; and if that sounds like you then you were probably made for each other.

There may well be 50 words for the word snow, but you only need one to describe this album: flaky.