My Best Friend is You

With Lily Allen denouncing herself as mockney queen by taking time out from music, the obvious successor to her throne is Kate Nash. With the release to the follow-up of her highly successful debut (2007s Made of Bricks), Nash wrestles the crown from Allens head and makes it her own. But the question is, is this particular mockney bubble about to sauerkraut and bratwurst (burst)? 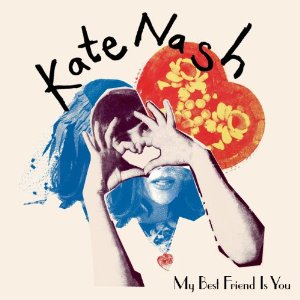 On this evidence, My Best Friend is You is schizophrenic in its identity. All of Nashs signature moves are still here in abundance, including her Lundun flava vocals that jump up and down over her pert piano playing.

The first single Do-Wah-Doo is classic Nash; it revolves around a relationship with a boy  which is a subject writes about quite a bit in her songs  to good affect it should be added. It bounces along with the zest of a song from the fifties, but unusually for Nash, she just appears to run out of lyrics and fills in with some vocal mumblings. Its catchy, but feels a little like a snack you shouldnt eat between meals.

Paris and Kiss the Girlll (which might or not be a typo for the word grill) continue in a similar musical vein. They are the playful, poppy side of Nash, who is both radio and karaoke friendly.

The first sign of something different from her appears in the edgy I Just Love You More, which despite just have the songs title basically repeated over and over, is done so with the kind of energy found on early Sugarcubes, with Nash letting herself rip in a way that Bjork used to do with such regularity back in the day. It also features electric guitars, which for the most part are completely banned from Kate Nash songs.

Approaching the halfway mark and we start to embark on unknown musical territory. Ive got a Secret is yet another track where Nash repeats the name of the track over and over again. A lot. Its reminiscent of some kind of spiritual chant in both being mesmerising and slightly disturbing in equal measures. Theres no melody here, no acerbic, witty lyrics; just repetition.

And then theres Mansion Song. This is where it starts to get really disturbing. Half of it is simply Nash reciting something closer to slam poetry than a song. Its the kind of rant that if overheard in the real world, would probably make you cross the road pronto. She also uses the kind of vulgar language that would make the foulest-mouthed trooper blush. It may be many things, but it is not a pop song. Halfway through the rage subsides, giving way to a drum beat with less than melodic vocals over the top. Its probably just for this song alone that the album has one of those Explicit stickers plastered on it, usually reserved for potty-mouthed rappers. Its certainly a different way for Nash to express herself artistically, but its certainly not a track you would want to listen to more than once.

She soon returns to more recognisable ground with the melodic Later On. You know, where she sings about boys and crying and stuff.

Pickpocket starts with Nash telling a story over a very simple piano melody. Its kind of what she does best, and after the battery she puts us through with the likes of Mansion Song, its a welcome change of pace.

And then theres the starkness to I Hate Seagulls which is a deceptively simple love song. Nash reels off a load of things that she doesnt really like, before cautiously revealing her feelings for a lost love. Its easily the most beautiful and powerful song on the album, as its the only one that truly lets its guard down.

If you loved Made of Bricks, then youll pretty much enjoy at the very least, half of this album; the half you could almost predict Nash could write and produce in her sleep. This ruder, cruder side however, may not be to everyones liking. This may or may not be the point shes trying to make.

Overall it feels a bit forced and pretentious; its only her second album and shes already experimenting with who Kate Nash is. We liked the old Kate Nash  the old new Kate Nash, not this new new Kate Nash. She was head smart and poppy. Here she just feels like shes already up her own arse and quite likes it up there. Thats the kind of behaviour usually reserved (and tolerated to a certain extent by fans) for the fifth or sixth album, not the second.

The darker side also makes the album considerably longer too; in fact, far longer than it really ought to be.

Maybe she just needed to get it off her chest, or wanted to make sure that she wasnt going to get pigeon-holed so early on in her career; you know, like being dubbed the new queen of mockney, or something like that.

From what weve heard of Nash so far though, we prefer the boy-troubled Kate, who doesnt like burning her fingers on the toaster. We hope its that one who comes out to play for the third album.