It's hard to believe that Brad Pitt is fast approaching fifty. And in those fifty years he's appeared in over forty feature films; some of them great, many of them good, and a number of them so-so.

Whatever he appears in however, Pitt always gives something in his performance that's worthwhile.

He's not only reached an age where he can pick and choose his projects, but more pertinently for Hollywood, he's an A-lister whose star appears has yet to wane. His presence in this film then shows his commitment to doing projects that interest him, and like something like The Tree of Life, is unlikely to attract a mainstream audience.

We all make mistakes, but for Markie Trattman (Ray Liotta) he makes the biggest mistake of all by making his with the mob. He puts on a hush hush poker game for some rich mobster pals, but a gang storms in and makes off with the considerable pot. The thing is, Markie actually organised the heist himself. He's got balls if nothing else.

He would have gotten away with it too, but he had to open his big mouth and boast about it to his mob friends. Still, they like him and decide to give him a pass.

Two other criminals are paid to make a jump on the same mob players on another game organised by Markie. But this one had nothing to do with him. That doesn't stop the mob from being mighty miffed at him and decide to do something about it.

Enter Jackie Cogan (Pitt); he's hired by the mob to look into this mess, and to make a reasonable assessment of it all. If he thinks that Markie has only got himself to blame, he'll facilitate the hit on him. After Cogan does some research, it looks like Markie could pay the ultimate price for his stupid mistake. 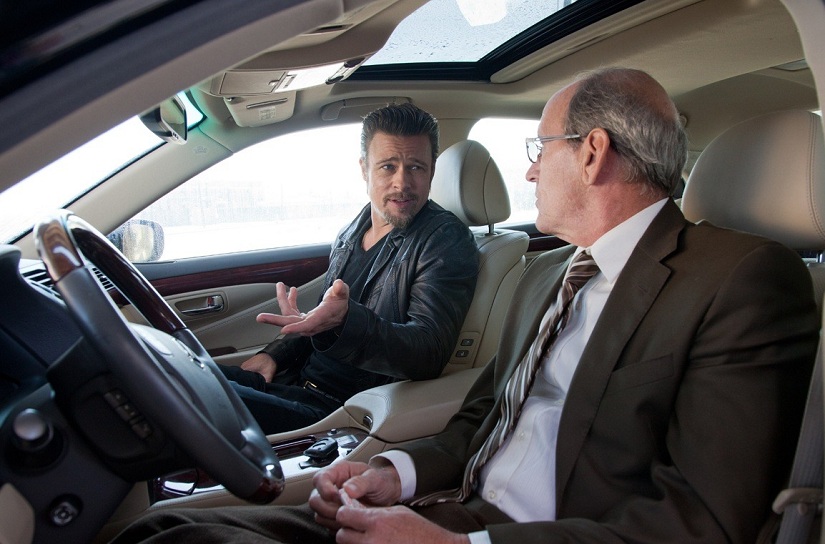 C'mon it's got great mileage and is in really great condition. And not a lot of people know this but I did that chick from Friends right there on the back seat. No, not the one with dark hair, the other one.

It's no surprise that this film is based on a 1974 crime novel, Cogan's Trade by George V. Higgins; it's a slow-burning affair, and pays a lot of attention to the written word. It would probably make a startling play, but is just too stagnant to impress on the big screen.

Kiwi Andrew Dominik appears to take his time over a lot of things, including his directing career; he made a splash with his debut in 2000 with Chopper, then returned seven years later for the sluggish The Assassination of Jesse James by the Coward Robert Ford, which also starred Brad Pitt. Killing Them Softly then, is only his third film in 12 years.

There's no deny he has a talent; it has a stylish quality throughout, but is let down by its delusions of grandeur. It desperately wants to be a hip version of Goodfellas, but is seriously let down by a convoluted script.

Dominik is also keen to have political noise running in the background; he may be eager to make a socio-political statement, but all it amounts to being is a dull diatribe that jars for no real purpose.

There are some nice performances however, most notably from James Gandolfini, Richard Jenkins and Ben Mendelsohn, who all pull their weight as damaged characters. Pitt does well conveying the enigmatic nature of his character, but this trait fails to make him interesting in any way.

The film certainly has its moments, but in attempting to be fairly high brow, it has far too many slow, wordy periods that just always seem to prevent it from building up to a full head of steam.

It's admirable to have the chance to see an adult, cerebral piece of cinema, but unfortunately it just expects its audience to work that little bit too hard.