If films are anything to go by, we really shouldnt be that gung-ho about deep space exploration. There are a lot of different things out there, seemingly queuing up  possibly in quite an orderly fashion  to kick our weak butts.

This translates to gaming too. You just know that something nasty is going to happen to the space marine third from the left. So just dont stand too close to him, okay?

When the original of this game was released for the PS2 in 2004, it was touted as Sonys very own Halo beater. The reviews, of which there were many, begged to differ. Hardly learning from previous experience, this sequel was being heavily pushed to be the killer app the PS3 has been oh-so-patiently waiting for. Hype can be such a wicked mistress... 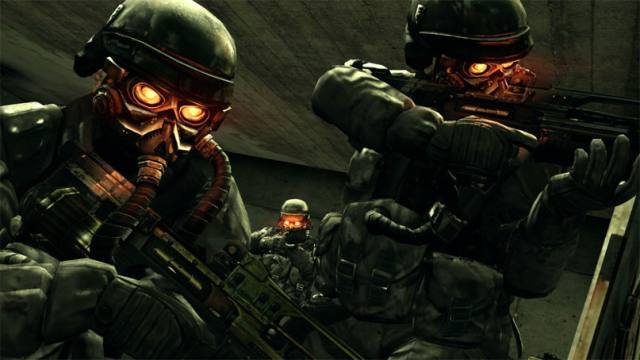 I know, I know, we should have gone to Specsavers.

You play a soldier, part of a foul-mouthed unit of the Interplanetary Strategic Alliance, otherwise known as the ISA. They have landed on the planet Helghan, with the mission to defeat the Helghast leader Scolar Visari (voiced, incidentally, by the brilliant Brian Cox).

What follows is the eternal pixellated struggle between good and evil. You can tell the Helghast are the evil ones because they have an evil orange glow around their eyes. This almost makes it easier to shoot the blighters, if it wasnt for the over-sensitive controls. You can see the Helghast soldier is straight ahead, but you cant bring your aim down from the night sky. Needless to say, you may need to tweak the sensitivity to get it anywhere near normality. Like most things though, after a while, you kind of get used to it.

So, this first person shooter doesnt win any awards for originality then. But really, what were you expecting? It does, however, deliver in another area  fun. Regardless of the pointless story, its a fun game to play. And some of the levels are actually pretty impressive. One finds you sitting pretty in the turret of a ship, having to blast away at the enemies outside. Its probably the closest video game interpretation of Luke shooting TIEs for the very first time, aboard the Millennium Falcon. You can almost hear "Dont get cocky kid" as you blast another ship down in your sights. Theres also quite possibly another unintentional nod to Star Wars, as your comms link seems to have graduated from the R2-D2 school of whirrs and beeps.

Another level sees you take charge of a funky exo-skeleton, equipped with guns and missiles. It certainly breaks up the running-down-corridors levels, of which there are plenty. But even these are a joy to play, due to the amount of detail thats been lavished upon the game.

And thats this titles major attraction  it looks fantastic. Sure you can argue til the Helghast come home that the Space Marines In Epic Battle theme is hardly original, but what it does, it does with style and flair. The only downside is that with so much detail to admire, theres very little time to stand and admire it. Especially when the enemy AI is top notch. If you sit and wait for them to do the same movement twice, you may be sitting there a while. Oh what was that? Ah yes, a bullet in the head...

Thankfully, the online aspect also rocks. Theyre all team based, which is good news if you suck in 1 versus all games. It also means that you have a fiftyfifty chance of gaining experience points at the end of the game. The points you earn go towards unlocking the next promotion, and with it a particular set of skills or weapons. So the better you get, the more you will be rewarded. With up to 32 players in a game, battles can get pretty intense. There will be games where you encounter spawn point whores, but hopefully these will be few and far between.

Kudos should also go to the sound department, for theyve done a grand job here. The sublime orchestration adds true depth with its cinematic scope. So make sure you crank up those speakers  the more the merrier.

So is it the killer app the PS3 so desperately needs? Probably not. But what it does have is enough bells and whistles to impress the most discerning FPS fan. Its not the Second Coming of gaming, but are any of us really surprised by that? Of course not. Theres no shame in being a space marine, so get to it soldier...