One of the great things about video games is that you can get away with things playing them that you couldnt really get away with in real life. Take the Kingdom Hearts series by Square Enix. If youve ever visited any of the Disney theme parks, chances are after a while you were inexplicably overcome with an absolute need to lay into one of those poor sods inside a costumed character roaming around the place.

Obviously it wouldnt look good attacking a Disney character in front of a group of impressionable children; you wouldnt really want them scarred for life thinking that you were responsible for killing Pluto now, would you? In Kingdom Hearts however, that kind of violence is actively encouraged, and Birth by Sleep is no different.

As usual, the story involves human characters that somehow interact with Disney ones. This one, the sixth in the series that also serves as a prequel to the original game, follows the adventures of Terra, Ventus and Aqua. Each character has a story arc you play through one by one. And with each characters arc lasting roughly fifteen hours each, this is a meaty addition to the franchise.

At this point wed love to be able to explain the story in more detail. Fact is, weve no idea whats going on. As is the norm with the franchise, it appears to have something to do with a group of keyblade-wielding teenagers having a bit of a strop. Needless to say, they need to get it out of their systems. 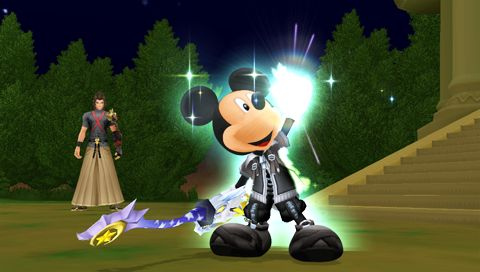 One thing you should know from the off is this is not a pick up and play title. And although its great to have a Kingdom Hearts title on the PSP, its just not an appropriate format.

For starters, there are just too many lengthy cut scenes to sit through. We first fired up the game on a journey on public transport, and found we actually got to our destination without doing much more than choose a character. They can be skipped, but just dont expect to be able to keep up with the storyline if you do. Not that watching them all will make you any the wiser. Theyve always been on the convoluted side and Birth by Sleep isnt about to change things in the slightest.

It should also be mentioned that this title is only available on UMD and therefore wont be available for the PSP Go. This is ironic considering not only the loading times of cut scenes etc, but also the recommendation to copy as much of the games data onto the systems memory. It would certainly benefit from being a downloadable title, but alas, its not to be.

Theres also the constant nag that you can only save at fixed save points. We found ourselves on the top deck of a bus (yes, we are suckers for public transport), with our stop imminent, with no earthly way of saving our progress. Did Square Enix not understand that the last P in PSP stands for portable? On this evidence, apparently not.

Theyve also ramped up the abilities side of things, making the combat side a far more complex experience. Ordinarily this would be a good thing, but the further you get into the game, the more fiddly pulling off combos, using magic etc becomes. Often we were in full flight of battle, only to be cut down in our prime because we were frantically hitting the D-pad menu system trying to recover our health in time. A simpler combat system would have been preferable. Really it would have.

All these frustrations aside however, its difficult not to enjoy the game. Firstly, it truly is a PS2 experience in your hand. It has a level of depth that some (yes, that includes us) may find daunting, but at least it isnt dumbing down the franchise for the sake of portability.

And then theres the fighting itself. For the most part, you fight a foe known as the Unversed, who come in all manner of shapes and sizes and have to be dismissed in various ways. If you find yourself struggling with one particular enemy you can always call on your D-link abilities, which allows you to harness the powers of one of your allies for a period of time. The allies include the mightiest of meeces Mickey. And its encounters like this that give the game its charm.

The Disney license is far from wasted; not only do a large number of familiar faces crop up, but also the environments you would associate with them. One of the most innovative levels is when you encounter Cinderella; you are only the size of a mouse, and need to get various objects around the house to fix her dress, so Cinderella can go to the ball. Its all beautifully rendered, and a lot of fun can be had jumping on a ball of wool and rolling over your enemies.

Another familiar face is when you have to take on Captain Hook in a boss battle. This leads to yet another grumble. The boss battles can be quite mental and very old school. If its a challenge you want, youve found it here. Its portability was somewhat an issue at these points, as we came close to throwing the PSP at the nearest wall out of frustration. This is a not recommended course of action.

For the most part however, fans of the series will put up with the games many caveats. This is due to the fact that its overall loveliness far outweighs its admittedly many gripes.

What its probably done more than anything though, is whet our appetites for the promised 3DS Kingdom Hearts title. If it learns from the mistakes its made here, it could possibly be the best in the series yet.

Considering that the PSP isnt exactly swamped with new AAA titles on a weekly basis  lets face it, was it ever?  a game of this quality is always a welcome one. Plus, you can have a great Disney experience without wanting to punch Plutos face in. Who could possibly ask for more?