It’s no doubt the dream of many a little boy to grow up and be James Bond. We say boy, because let’s face it, what little girl in her right mind would want to be a misogynistic killer when they were older?

It’s probably this idea that laid the foundations for the creation of the Kingsman. The story of a young man being plucked out of working class obscurity to enrol in a secret spy organisation, first appeared in graphic novel form in 2012, before director Matthew Vaughn got his mitts on it for his 2015 film Kingsman: the Secret Service.

After doing incredibly well, it was only a matter of time before a sequel exploded onto our screens. 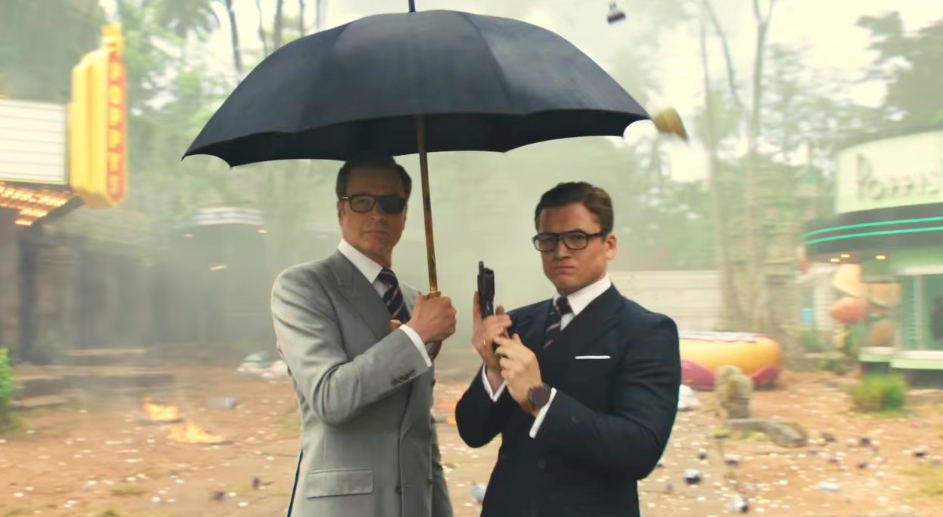 You need to be prepared when it's raining cats and dogs...

After literally saving the world, super spy Eggsy (Taron Egerton) deserves some R&R. He spends it by hanging out with his girlfriend Tilde (Hanna Alström)- who also just so happens to be a real princess - his dog, and his mates.

Unfortunately evil super villains have a habit of spoiling time off, which is just what happens when Poppy Adams (Julianne Moore) pops up with her evil intentions. She is the head of a terrorist organisation known as the Golden Circle, and one of the first things they do is decide to bring the entire Kingsman network down, which they manage to do pretty successfully.

Thankfully Eggsy and Merlin (Mark Strong) survive – just – but find themselves all that’s left of their spy organisation. There are contingency plans however, for such emergencies, and the pair head to Kentucky in the US, where they are introduced to the Statesman, a familiar looking spy organisation headed up by Champagne (Jeff Bridges), and helped out by Tequila (Channing Tatum), Ginger Ale (Halle Berry) and Whiskey (Pedro Pascal).

And with Poppy’s plans to get as much of the population of the world addicted to her new drug, and then hold all the authorities to ransom for the antidote, Eggsy needs as many friends, old and new, as he can get.

Wouldn't you consider a bionic arm an unffair advantage for bowling?

As with most sequels, they can go either way; they can be a vast improvement on the first, or they can literally come off second best. This one definitely falls into the latter.

The main problem is that generally everything about it is a little bit too cocky. It attempts to turn everything up to eleven, but fails miserably in a number of areas. Although the film is indeed bigger, and oh so much longer at nearly two and a half hours, the plot is decidedly generic. So much so that it’s borderline ironic in an Austin powers kind of way, but without the irony.

There’s also something irritating about the main protagonist. Sure he scrubs up well once in a suit, but his barrow boy accent and constant swearing just doesn’t make him that likeable. On top of that, there’s a scene that is in such poor taste, it’s both a surprise and a huge disappointment, that it made the final cut. Near the knuckle doesn’t even come close to covering it. Although in a way it does.

Even though Vaughn’s direction is thrilling in places, some of the set pieces, although impressive, do feel by the book and lack originality. And there’s certainly overkill as far as the slo-mo fighting scenes are concerned, that are overused like a new toy.

Kingsman: the Golden Circle is like the sugar-free version of your favourite treat; it may well look similar, but after a chunk or two you soon realise that there’s very little substance there and although it seems to serve a purpose initially, ultimately it’s quite an empty experience. Proving, if nothing else, you can’t beat the real thing.