They can walk into a bar and get free drinks all night; carry around Nando's black cards; cause a riot just walking down the street and have their pick of nerdy groupies.

Spare a thought then to those nearly mega-famous characters then, who despite all the years of slogging it out on 8-bit, 16-bit consoles etc. still have profiles that just didn’t quite manage to hit the top.

Making his debut in 1992, Kirby appeared in Kirby’s Dream Land for Nintendo’s Game Boy. Since then, he’s been suffering from his pixelated body dysmorphia by transforming into various guises in over 30 games. 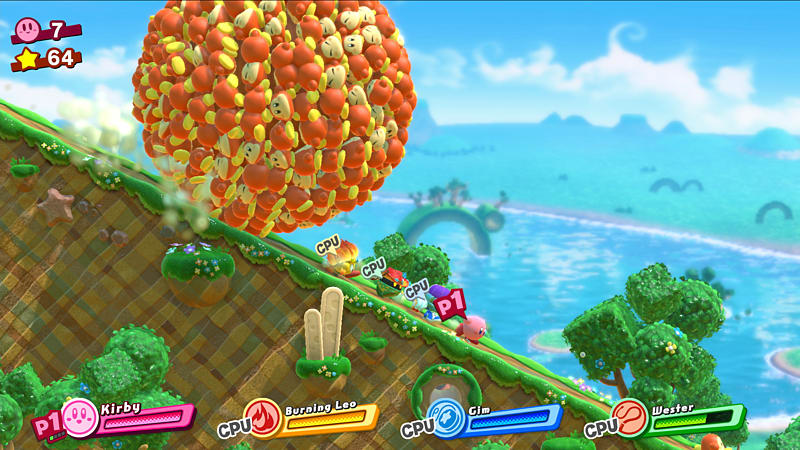 This whole cloning thing is getting out of hand?!

Even if his body image is all over the place, at least he’s on familiar ground here, with this adventure taking part on his home soil, as it were, Dream Land.

The story is nonsense. Needless to say, our hero has to make it through the 2D level, collecting the usual collectibles, and exit the level to progress.

His world is brimming with vibrant colours, like a graveyard for rainbows. He starts off in his pink blob form, akin to freshly chewed gum, as he sets off on his adventure. He has no special powers of his own, but he can inhale enemies and spit them out as a means of defence. More interestingly, Kirby can inhale an enemy and then copy their particular abilities. So if he swallows a fire-spurting enemy, Kirby can now do the same.

And with the many obstacles in Dream Land, Kirby has to do this a lot, as he will need certain skills if he is to fully complete a level. The amount of enemies he can transform into is both dizzying and slightly horrifying. After all, there aren’t many games that allow you to turn into a cleaner, where you can literally sweep your opponents up. You can also be a cook, a cheery character who uses a parasol as a weapon, as well as other characters who utilise fire, water, ice and electricity to their advantage.

Where the game works best, is as a multiplayer experience, where up to four players can take on various characters with different abilities to take on all comers. It can be played in single player mode, but it’s a little more tricksy. You have to avoid making ‘friends’ – the ability to turn enemies into travelling companions – although to complete certain levels, you’ll have no choice, as you’ll need more than the one ability that you can use at one time as Kirby, in whatever guise he may be. 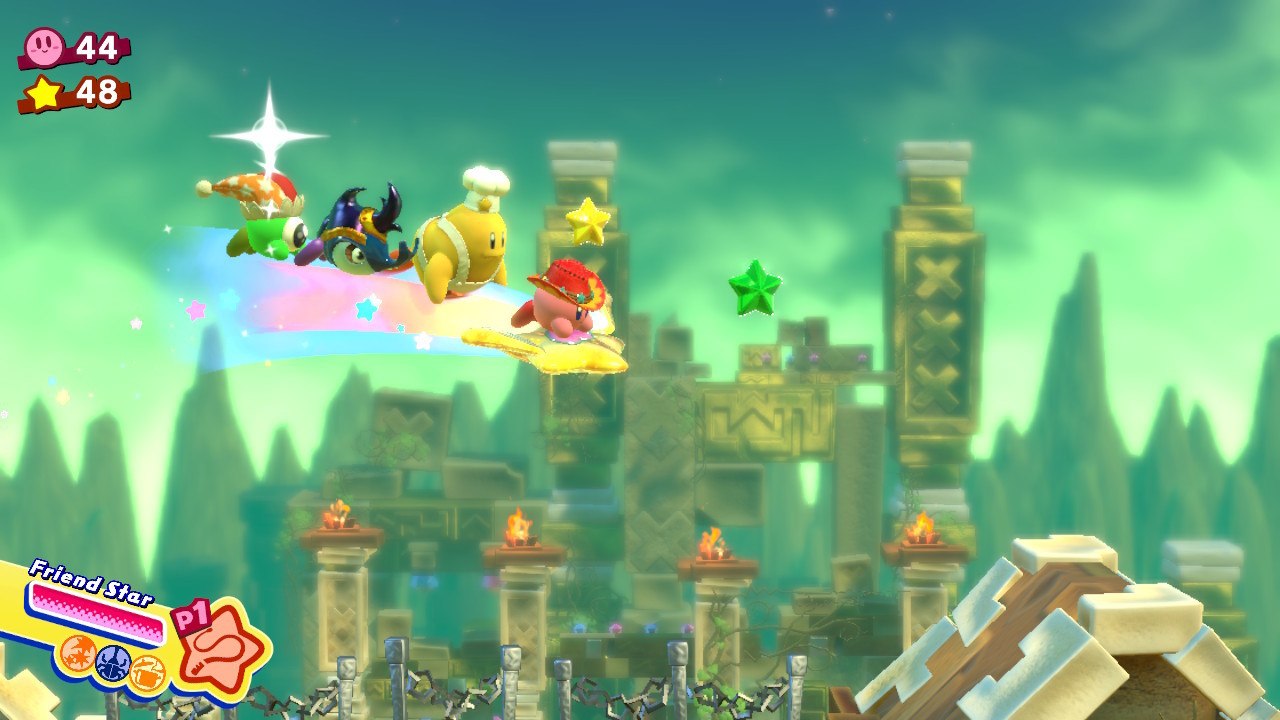 The Village People are enjoying their new take on the tour bus.

If you have CPU characters with you all the way, the game won’t last very long at all, as they can pretty much do everything that needs to be done for you. A dedicated solo player campaign would have been ideal, but it’s not to say it can’t be done with a tad of planning.

There’s a supreme amount of creativity on display throughout this game, making it a thoroughly joyous experience. Many of the puzzles can be quite taxing, and may slow you down, which is no bad thing. Tinkering with the powers you have, and the extra powers you can borrow to power-up your own powers, is all part of the game’s appeal. It also has a pleasing soundtrack, entrenched in its 8-bit roots, acting as a reminder to Kirby’s historical significance.

Very few gaming characters have worked as hard as Kirby has over the years, so it’s disappointing that he hasn’t reached the same level of recognition as some of his peers. But then maybe he only he has himself to blame, as he’s constantly having an identity crisis.

Although it’s not a sequel to the beautiful Kirby’s Epic Yarn we’ve been hoping for, Kirby Star Allies is a re-boot – in ideas at least – of Kirby’s origins, and there’s nothing wrong with that. It’s a classic 2D adventure, that’s stupidly fun with friends, that incorporates all the things that made us fall in love with video games in the first place.

He may be in two, three, or more minds as to whom he is, but to us, Kirby will always be a super star.