2007 saw this London-based trio knock out their debut album Myths of the Near Future. It couldnt have been that shabby as they won the Mercury music prize for it that year. The Klaxons had arrived. 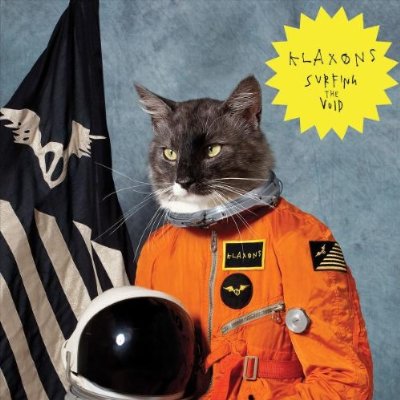 Not content with being the Harper Lee of the music world, theyve only gone and produced a second album, the cheeky scamps.

Theres something appealing brash about Surfing the Void. The band certainly like a full sound. At times it resembles a recipe as made by a young tot, eager to please the world by throwing all manner of ingredients into the pot. Sure, its a little messy in places, but you cant help but feel impressed that theyve gone all out to please.

They ease you into their sound relatively gently with Echoes. Its that track you hear at a festival, that even if youre not a fan of the band, youre more than happy to sing along to it  or more accurately, mouth something that you think resembles the lyrics, and hope to God no-one rumbles you.

The Same Space takes a few baby steps into a slightly harsher place. Some of the higher pitched vocals sound as if they were just an octave too high for whoever was delivering them. It feels a little strained, but with so much going on around them, its not that offensive.

The title track comes bounding out with the energy and exuberance of an Arctic Monkeys track. It wouldnt come as a surprise to learn that Josh Homme produced it; he didnt, but if he did, there would be no surprise here.

The pace doesnt let up with Valley of the Calm Trees either, where its guitars appear to surf on its lapping waves of noise during its middle half.

Someone slips them a Goth pill for Venusia, as it acts all broody and arrogant, stomping about the place in its musical DMs.

This swagger continues with Extra Astronomical, but this time though, its also been dipped in a dancy techno lava akin to The Prodigy for extra abrasiveness.

Things return to an indie-rock vibe with Twin Flames. It even has drums you can hear and everything.

It doesnt last long with Flashover barking in your ears. It takes off at such speed, it reaches that point where its almost no longer on the ground. Its also a tad on the aggressive side, which is most welcome.

Overall its a full-on kinetic experience, with sound just moving all at different paces around you. Occasionally it doesnt always gel, but it doesnt stop you from appreciating its break-speed energy. Its a peculiar melting pot of noise at times, but at least it doesnt sound like anything else is going.

Whether it will claim any awards like its snooty sibling is unclear, but it wont stop Surfing the Void being a winner its own right.