Being a character in a video game is a cut-throat business. Sure the likes of Mario and Sonic are the cream of the crop, virtually household names in any territory. But you never hear about those they were competing with, who they trampled on to get where they are.

Meet Klonoa for instance, a cat-like creature that debuted on the PlayStation in 1997, in a game entitled Klonoa: Door to Phantomile. Namco had high hopes for Klonoa, with the idea being that they had created their mascot.

But things didn’t work out that way, despite Klonoa’s efforts in this and its direct 2001 sequel Klonoa 2: Lunatea’s Veil, both of which feature in this anniversary release. Which is a shame as these games are truly gaming gems. 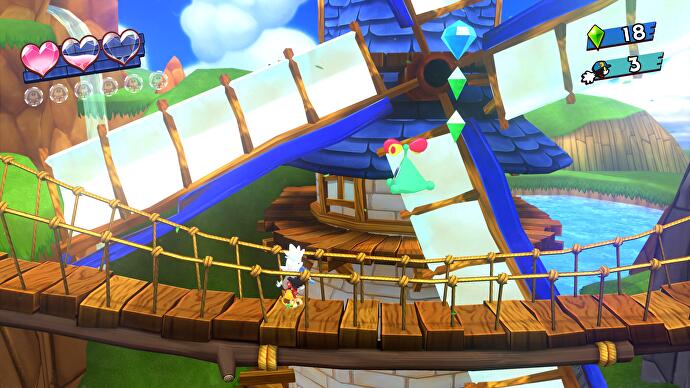 You know, this would be a really nice spot for a picnic if it wasn't for all these baddies chasing my butt.

Both are set in curious worlds, with even more curious types inhabiting them. It’s like an early form of 2.5 platforming, with a certain amount of focus leaning to the background. Klonoa, looking like a mutant cat, has the ability to attack enemies with something described as a wind bullet. It’s a technique that you must utilise a lot, as it’s essentially the only weapon you have.

It’s also needed to help get you around the environ, as picking up enemies allows you to jump higher to other platforms. Later on it gets more complicated, as you will then have to use your wind bullet not only to go higher, but to use it in mid-air on enemies to go higher still. It all gets a little acrobatic, which leads us to believe that Klonoa must have had some experience in a circus in the past.

There is an easy mode you can use, which offers you infinite lives, but don’t be fooled by it, as it doesn’t actually make the game any easier. In fact towards the end, so achingly close to finishing the first game, we had to wave the white flag, in ‘easy’ mode, as it was just too darn difficult to finish. Not without leaving what precious hair we had left. So you have been warned.

But if it does get a little too much , fear not, as there’s a handy co-op mode, where someone can jump in and help you out. If they’re any good that is – you’ll probably find out soon enough.

Considering the age of these games however, these remasters are joyously playable. The stories themselves make no sense, as their bonkers titles testify to, but their gameplay is both unique and original. For instance, Klonoa must occasionally face the background and throw enemies in the distance. This becomes more prevalent in the boss battles, of which one are two are quite challenging. 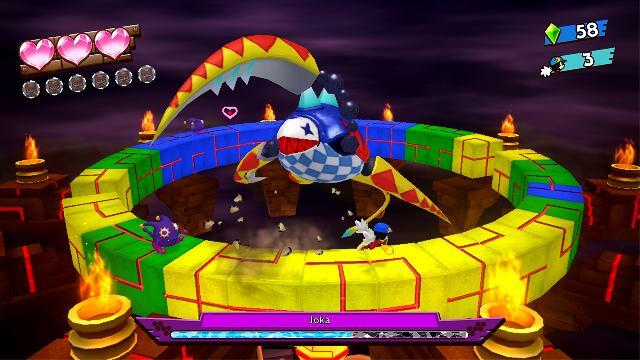 Did I tell you I get a little motion sickness?

It’s sequel, released four years later, isn’t a huge leap from its predecessor, but does enough to make it a pleasing follow-up. And visually both look really impressive considering when they were originally released.

The fact that they weren’t tinkered with for a western audience is probably the reason Klonoa didn’t really take off outside of Japan. But that shouldn’t undermine their quality, as they're both impressive platforming titles. Apparently there have been issues with frame-rate with this second game, but there’s a possibility that this has been addressed, as we encountered no such problems on our PS5.

We confess to having never heard of the franchise, but are chuffed to be able to get the opportunity to play through them now.

It feels a little odd saying it, that Klonoa may be just a little too quirky for mass gaming, considering the likes of an Italian plumber, blue hedgehog and a crazed bandicoot, but that might just well be the case.

But it’s Klonoa’s quirkiness that adds to the charm that the game often oozes. It’s a crazy, colourful world that is just pure fun to explore. If ever there were a time to discover the many joys of Klonoa, it’s now.