Thank the almighty beings above for video games. Where else can you participate in a sports game without having any interest in the sport itself? Take golf for instance. It is primarily a sport for white, middle-aged, middle-class men, with too much time and money on their hands. Watching it played by professionals is about as exciting as looking out of a window that has a picture of an empty field attached to it.

But playing a golf title however, is a different fish-filled kettle; getting your hands on clubs in either Everybody’s Golf or Mario Golf is an absolute joy that you can lose hours to playing, making them sports titles that you could readily recommend.

Another sport – one of many – that doesn’t really appeal is dodgeball; after all, what is there to like about a game that’s main object is to hit another player with a ball? It just sounds like a playground game that’s got too big for its boots, and a group of deranged adults have decided to call it a sport, which is complete nonsense. 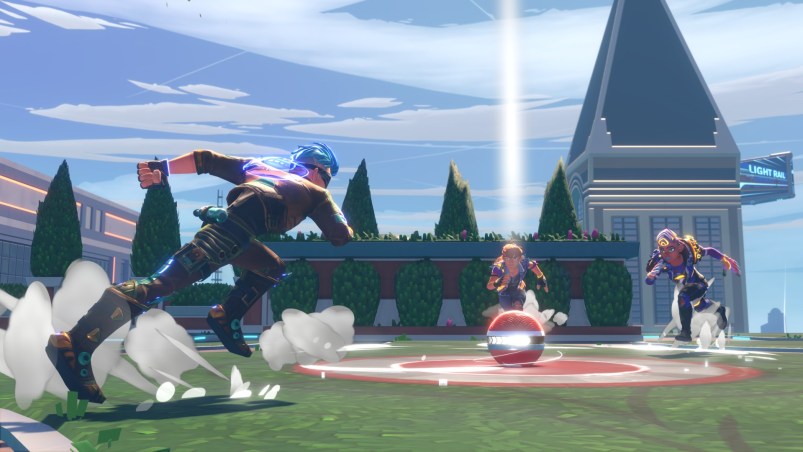 I've never felt so alive running for this ball!

Certainly a game based on dodgeball doesn’t initially sound very appealing, but in the world of video games, where the most mundane sport can be fun, Knockout City puts on quite an impressive game face.

The good news starts with the fact that the game is an interpretation of the sport, much in the same way as Mario playing golf is with all its extra power-ups and abilities, so a standard sim this is not, thankfully.

The standard game is a 3 Vs 3 battle, with the first team to get to ten winning the round, and the best of three rounds winning the game. You then run around a map, looking for balls, then hunting down your opponents before they do the same to you. Manage to hit an opponent with a ball, and they will lose one of their two lives, if they get hit again then your team wins the point and they have to respawn.

There’s also the odd addition of a glider, that you can use to get from one part of the map to another, but its use isn’t essential to game play, just a curious bit of fun. As is the ability to be used as a ball yourself, where one of your team-mates can pick you up and hurl you at an enemy. As far as we’re aware, this has yet to be seen in real-life dodgeball, but there’s no doubt its popularity would increase if it was.

Although there aren’t that many maps, with only five available at launch, the ones currently in play are colourful and vibrant, with a few areas that can help you out if you’re lucky; for instance, there is one that contains pipes that can suck you up, and if you time it well, it can do so to prevent you getting hit by an opponent who has you in their sights.

As far as multiplayer games go, you don’t have to be that experienced to get into this game. You simply run over a ball to pick it up, and use the right trigger to throw. To make it that bit easier, a target will highlight your opponent, so that when you have them in your sights, you can just throw the ball at them, and as long as there is nothing blocking the shot, there’s a chance you’ll hit them. But what you have to be prepared for is that if they see the ball coming, they could catch it, and then immediately throw back at you. Which you could catch yourself, if you’re quick enough, otherwise you will lose a life.

It’s a simple enough dynamic, but an effective one, as you attempt to be a little more strategic, possibly sneaking up on them out of their sights and firing off a ball in their direction. What it means overall however, is the game has an impressive pick up and play quality to it, allowing for newbies to still have an enjoyable time without necessarily being thrown in at the deep end to those who possibly take the game a little more seriously. 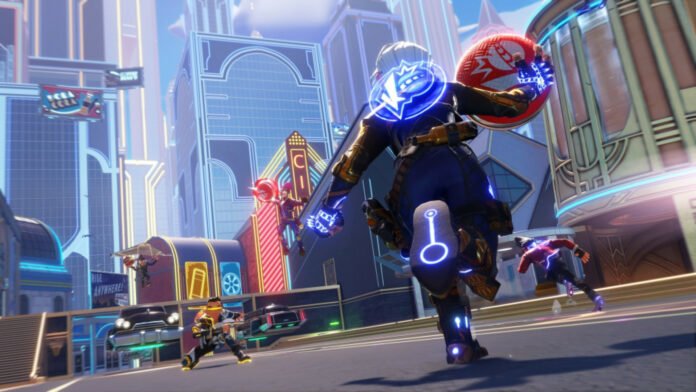 What would possibly put some off from the game might be the multi-player aspect, especially the game’s chat facilities; you can choose to hear all the chat from all the current players in the game, or just from your team alone, which certainly allows for a greater level of strategic thinking if needed. Or, as we chose to do, you can just turn it off completely. We’ve often been put off by playing multi-player titles, as often they have led to bad experiences; the amount of times we’ve come across an idiot playing FIFA for example, is countless, to the point that playing online is never an option.

Here though, you can just get on with your game. This has allowed us to build up a bit of confidence again playing online, and come away with a positive experience from playing multiplayer. Even if it is an issue, you can even set up a private match for just you and your friends, making it about as safe as can be, depending on how friendly your friends are, of course. You can also take that team and put them in a league, once unlocked in the main game, giving you and your friends even more options to play.

As far as playing on your own goes however, it’s the type of game that doesn’t really call for hours and hours of dedicated play; with the matches flying by, you can just dip in and out of it as you see fit, allowing for some short bursts of gaming fun. And when you consider how many games now want to suck you in and keep you there for eternity, it’s refreshing to be able to just snack on a match or two, without having to indulge in the all you can eat buffet lasting days on end.

In truth, it’s a game that possibly has no right being as much frantic fun to play as it is, as you are just running around throwing a ball, but it manages to give you just the perfect gaming fix, and you can’t ask for more than that.

It’s also a title that’s adopting the season approach to gaming, where modes, maps etc can be swapped out, so the game can develop over time, hopefully improving it, avoiding the overall experience from becoming too stale and repetitive.

As far as we’re concerned, it is one of the most accessible multi-player titles we’ve played in years, and shows a lot of promise in where the game can possibly go in the future.

It also makes it onto our list of sport games where playing it is far more fun than either watching or participating in the real thing could ever be, and that can only be a good thing.