Having gained rave reviews for her role as Lisbeth Salander in the original The Girl with the Dragon Tattoo trilogy, it was no wonder Hollywood would come-a-knocking for Noomi Rapace, having starred in the likes of Ridley Scott’s Prometheus and Will Smith’s Bright, as well as Amazon Prime Video’s Tom Clancy’s Jack Ryan opposite John Krasinski.

The Swedish-born actress has never neglected her European roots however, often returning to her home shores for smaller budgeted, indie fare such as this Icelandic feature. 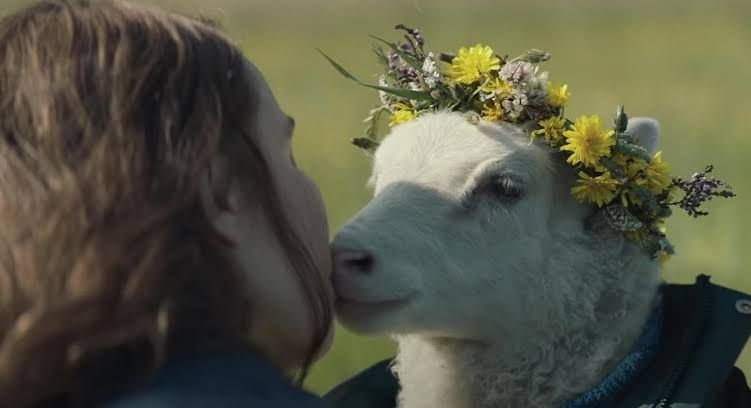 This remake of Midsommer surpised many.

Living in an extremely remote Icelandic sheep farm are couple Maria (Rapace) and Ingvar (Hilmir Snӕr Guðnason). One night, unbeknownst to them, their sheep are spooked by a sinister visitor, with all of them escaping its grasp, bar one.

Some time later, one of their ewes is about to give birth, which the pair are on hand for. They aren’t prepared for this particular newborn however, that takes them by surprise. But having suffered a loss of a child of their own, they decide to bring the infant up, whom they name Ada, by raising it in their home. But bringing up this particular offspring eventually comes at a heavy price for the couple.

Hmmm I'm not sure about a visit to the local farm market.

It’s no surprise to learn that Valdimar Jóhannsson, making his full-length directorial debut here, comes from a special effects background, as this film relies on them heavily.

When Ada is first revealed, it takes some time to get over the absurdity of it, and it might be said that some audiences may have a difficult time getting over its appearance at all. Ada’s physical look is certainly an oddity, one that you either buy into, or you don’t.

If you do, there’s a quiet curiosity of a film to be had here. It comes across as somewhat of a distorted Disney feature, perhaps only missing the addition of Ada actually having a voice of her own.

It’s disappointing then that Jóhannsson, who also co-wrote, includes a completely redundant storyline that lends absolutely nothing to the overall arc of the narrative; for some reason, Ingvar’s brother arrives unannounced, and stays for a bit. At first he is shocked by Ada, but soon develops a fondness for her. It also transpires that he also had a ‘fondness’ for Maria too, that hasn’t exactly subsided. Perhaps his inclusion was to add more in the way of dialogue, as before his arrival, it’s certainly sparse.

The truth is however, that even though Lamb is an interesting attempt at exploring the theme of child loss with a mythical folk tale, it would have been better off being served up a short, as their sadly just isn’t enough meat on its bones to warrant a full length feature.