Commerce is a bitch. Once upon a time, everyone knew where they stood with the Christmas period. It popped up out of nowhere in late November, and disappeared without much fuss in early January.

Now, thanks to the crunching wheels of capitalism, it’s becoming more difficult every year to know when one Christmas ends and another begins.

To that end, releasing a Christmas film for the home entertainment market in mid March is not the definition of madness as it might have once been seen.

Hoping to extend the yuletide cheer is US director Paul Feig, with his Last Christmas. 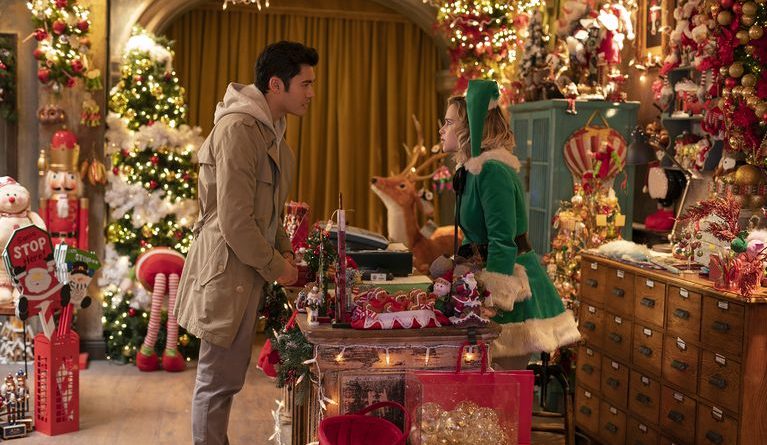 I wonder if you can help me, I'm afer a chocolate Easter egg.

Finding her life in a bit of mess is Kate (Emilia Clarke). For starters, she is of no fixed abode, as she finds herself sofa surfing at many of her friends’ homes in London.

Work is up in the air too. She has dreams of being a singer, attending auditions when she can, but until she gets her big break, she’s dressed up as an elf, working in an all-round Christmas shop in Covent Garden.

All this chaos has a bearing on her love life, which apart from the many one night stands, is non-existent.

Things change however, when she spots an attractive young man outside her shop. His name is Tom (Henry Golding), and he’s unlike anyone else Kate has met. At first she just finds him weird, but the more time they spend together, the fonder she becomes of him.

But with all too good to be true scenarios, Tom isn’t all he seems, as he holds back on their relationship developing further. But with Tom being an unusually positive aspect to her life, Kate is keen to pursue it, regardless of whatever the obstacle may be, after all what can get in the way of true love? Is that one of your dragons?

Despite the somewhat unseasonal release, there’s always room for a feel-good film. The problem with Feig’s effort however, is that it’s not all that of a feel-good experience.

That’s not to say it doesn’t give it a good go. Having abstained from being queen of dragons, Clarke is a natural for a rom-com such as this. She has a warm personality that will have you sitting through a Christmas film any time of the year. Golding is less convincing however; although they make a pleasing match on screen, much of his performance feels like he’s auditioning to be the next Doctor Who, which it has to be said, he’d certainly do a fine job of. In his defence, his character doesn’t have much scope, due to the development of his story, which is where the real problem lies.

Much of the film depends on the relationship that builds between Clarke and Golding. As it transpires, it turns out to be a bit of a red herring. And although the revelation works, it’s far from satisfactory.

What Feig delivers is a half-way house between a Richard Curtis rom-com and a derivative of It’s a Wonderful Life. The result is a rather empty and disappointing experience, as it doesn’t succeed on either front.

Kate is certainly a character an audience can get behind, but her road to redemption isn’t necessarily one we want to see. Sure she can see the light and get her shit together, but this is clearly a Christmas flick, and romance should really feature at the heart of it. But it doesn’t.

Certainly the music of George Michael that features throughout is a bonus, that thankfully doesn’t deteriorate into an awful Mama Mia! scenario with characters bursting into his songs.

Last Christmas is like one of those gifts we all get, where we can appreciate the effort that’s gone into it, and however thoughtful it might be, we just hope they’ve still got the receipt, because you just don’t need it in your life.