Jennifer Strange is a fifteen year old foundling, brought up by the Blessed Ladies of the Lobster. For the last little while she's been serving out her 'indentured servitude' by running Kazam Mystical Arts Management, a kind of employment agency for those that do magic. This, you see, is a Britain (or rather, an Ununited Kingdom) in which there is magic. But the power of magic has been on the wane, leaving its practitioners with somewhat rubbish jobs like rewiring houses and delivering pizzas by flying carpet. Times are tough, and only a Big Magic can revive the fortunes of the magicians. Big Magic is hard to come by, however, and hasn't been seen for a very long time. 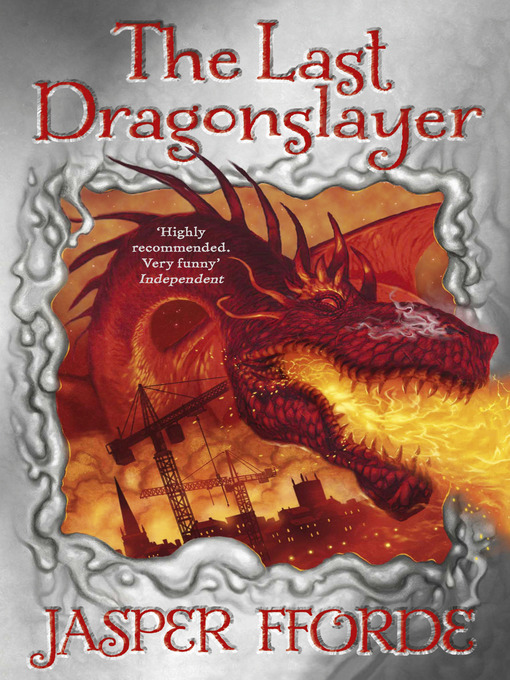 One day, all the precogs (people who tell the future) announce that the last dragon, Maltcassion, will die that very weekend. At the hands of a dragonslayer, no less. Since the magical boundary surrounding the dragonlands - the area given to each dragon, to keep dragons in and people out - dissolves on the death of a dragon, this premonition prompts a mad dash for land. At the same time, the magicians start to notice that their powers are getting stronger. Jennifer sets out to find out more: might the death of the last dragon mean the death of magic, or could it precipitate some kind of Big Magic and keep the magicians in business? Who is the last dragonslayer, and are they really going to kill the last dragon? If so, why? And are dragons really the terrifying, bloodthirsty beasts they're made out to be?

Fforde is the critically acclaimed author of the Thursday Next and Nursery Crime series of novels. This is his first ever children's book, and the first of the Dragonslayer trilogy. It's the kind of book that's aimed at a young readership but will appeal to people of all ages - much like Rowling's Harry Potter series, or Pullmans' His Dark Materials. Well, it will appeal to people of all ages who like fantasy novels with a comic edge.

And for those for whom a book printed on actual paper is no longer sufficient, The Last Dragonslayer is also available as an 'enhanced edition', which means that you can buy it in the form of a full ebook with synchronised audiobook (read by Jane Collingwood), which comes with a regularly updated news feed and an interactive map of the world Fforde creates. Everyone can access the Dragonslayer pages on his website, which also contain a map, a 'who's who' and even a 'where's where' and a 'what's what'.

The Last Dragonslayer has elements of the winning Fforde formula: a female protagonist with an unusual animal sidekick, with mysteries to solve, set against a backdrop of a Britain that is at once familiar and slightly alien. Fforde's creativity is very much in evidence here, as is his wit. Although so much in this novel is, well, novel, the wizards in The Last Dragonslayer might just as easily be found shambling through the pages of one of Pratchett's Discworld novels; this is perhaps more an homage, though, rather than a direct borrowing.

The story is suffused with an interesting and perhaps slightly moralising subtext, one that some readers might identify with but which might put others off: pointless wars are fought over resources, fuelled by propaganda circulated on both sides; almost everyone is greedy, and some are also very dangerous; and only a few people stop to question 'common sense' and try to look past the stories people tell about the world. This delightfully twisty, turny tale is a story of good versus evil, of heroes and villains, and the reader is left wondering until the very end which will triumph.

If you enjoy funny flights of fantasy, and if you like Fforde's other novels - and Discworld and Harry Potter and His Dark Materials - then you'll very probably like this.