Despite pretty much being big dogs, albeit trickier to hug, horses don’t get the spotlight as much as other animals. But over the years, they have featured heavily in film, in everything from Black Beauty to War Horse.

In Andrew Haigh’s latest, you could be forgiven for thinking that this was yet another equine flick to add to the list, but despite a horse featuring in the poster, its name as the film’s title, and being mostly set around the horse racing world, Lean on Pete takes its audience on a very different ride.

I can't work out why we're standing here, but he seems to like it.

For fifteen year old Charley (Charlie Plummer), after his mom leaving when he was young, and not having any siblings, the only family he has is his old man Ray (Travis Fimmel). That’s not great news when you consider how lacking he is in the parenting stakes. Still, there’s love there and that counts for something.

While out running, a stranger asks for his help in changing a tyre on his car. Del (Steve Buscemi) has a trailer attached, with horses inside. It turns out he’s a horse owner, trying to get to a race meet. While changing the wheel, Charley asks if he needs help looking after the horses. Del says he does, and before you can say “they’re off”, he’s on his way to the track with Del.

Charley soon finds himself falling in love with the horses, especially Lean on Pete – a five year old quarter horse. But just when he found some purpose in life, things change when his dad ends up in hospital. Within a blink of an eye, Charley’s world is turned upside down, and with few options on the table, his future looks like disappearing fast over the horizon. 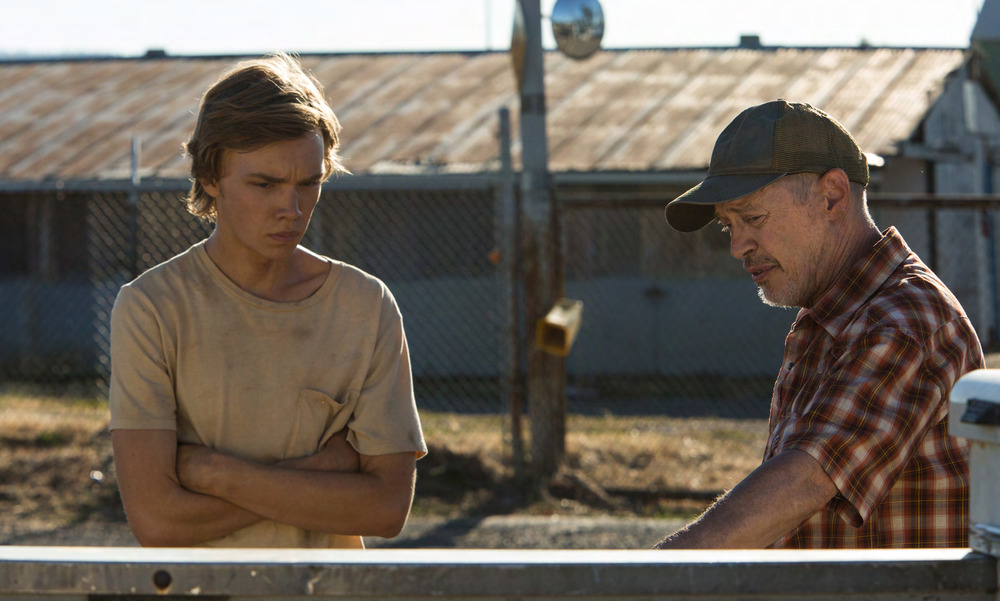 Seriously? You're still in a strop 'coz I bagsied the baseball cap?!!!

With British director Andrew Haigh’s first two films (Weekend and 45 Years) both being shot on home soil, for his third he has moved to the grand, open spaces of middle America. And although it does feature a horse, it is very much an indie road movie, based on the novel by Willy Vlautin, which charts the dramatic journey of a teenager looking for a place to belong.

Much like his previous work, Haigh is keen to give his story, and its main protagonist, plenty of space. But he doesn’t fill it with Hollywood glam; the film has a real life grittiness to it, as if the audience was hitching a ride in the back of a beaten up, old truck, just out of sight of Charley’s life. Sometimes there feels like too much space, as if we’re just a little too far behind to catch up, but the reality is, we’re never too far out of touch, mostly thanks to the impressive performance by Plummer.

There’s something beautifully understated and elegant about it; Plummer is seemingly consumed by the character, to the point where you might struggle to recognise where one ends and the other begins. He gives Charley a heartbreaking warmth that won’t fail to charm you; his perseverance through endless obstacles will make you want just reach out and give him a hug.

Add to that some impressive support, from the likes of Chloё Sevigny, Steve Zahn, and the ever watchable Buscemi, and you have a film that quietly wins you over throughout, and before you know it, has stolen your heart on the finishing line.