Nobody likes leftovers. They lurk. They never taste as good as they did the first time. They become increasingly beige the longer you fail to tackle them. They are almost inevitably destined for the bin, or, at best, for a deeply unsatisfying repeat appearance on your dinner plate. 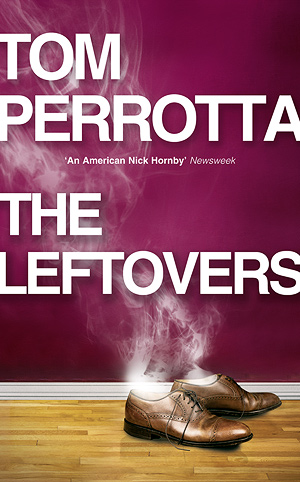 Imagine then, if you will, what it feels like to be a human leftover. This is exactly what has happened to the residents of a small north American town called Mapleton, who have inexplicably survived an utterly inexplicable event where huge numbers of people simultaneously vanished into thin air. This is the premise of The Leftovers, Tom Perrotta's sixth novel, which explores the various ways in which these ordinary people attempt to get on with their ordinary lives in an extraordinary world where nothing makes sense anymore.

The Leftovers focuses on telling the story of one family. This family - unlike so many others - were lucky enough to have avoided losing any of their number in what some people had begun to call The Rapture. There's Kevin, the town's mayor; his wife Laurie; their scholarly, hardworking teenage daughter Jill; and their slightly estranged son Tom, who went to university and hasn't yet come back, or decided quite what he wants to do with his life. One might expect this fairly ordinary family to cope relatively well, since they all survived; perhaps it might even make them closer. Perrotta has something quite different in mind for them, however.

After Laurie's best friend joins a cult called The Guilty Remnants (whose members denounce their old lives, take a vow of silence, live communally and smoke continually to prove they aren't afraid of death), it isn't long before Laurie leaves her family and joins their number. Jill starts hanging out with some slightly delinquent youths, becomes promiscuous, starts taking drugs and stops trying at school, and invites one of her delinquent friends, Amy, to live with her and her father, Kevin. Tom gets involved in a different cult, the Healing Hug movement, led by the charismatic (and criminally polygamist) Holy Wayne, which eventually leads to him going on the run with one of Wayne's wives disguised as Barefoot People (yet another cult, this time fans of free love and recreational drugs). Kevin attempts to get on with his normal life, seeking to plug the emerging gaps in his life with a new relationship with a depressed woman whose entire family vapourised in The Rapture.

This is a story about love and loss, and about how people try to make sense of things that simply don't, set in a marvellously dystopian near-present. Although this family failed to disappear, their old selves are transmogrified: their story makes plain that The Rapture's effects extend beyond physical presence and absence.

The fact that The Rapture is unexplained is a great strength of the novel: it is simply an event that is as inexplicable to the reader as it is to the people whose stories are told in the book. Instead, Perrotta uses it as a device to explore ideas of how different kinds of philosophical rationalisations of an irrational event can emerge and spread, the circumstances under which they seem to make sense, and the effects these can have on ordinary lives. The cults are both believable and preposterous; it is easy to see how they could appear to be completely reasonable responses to such a puzzling event as The Rapture.

Where the book falls down is in the delivery. The ideas are interesting and the storylines have their moments, but somehow it fails to captivate. Perhaps too much is left unexplained, and too much focus is placed on the residents of this one small town, which seems particularly strange in the globalised world in which we live. The ending is deeply unsatisfying, leaving far too many loose ends, acting as a fairly damp squib to what started out as a very intriguing endeavour.

Perhaps, like some of Perrotta's other literary fiction (i.e. Election and Little Children), The Leftovers is ripe for retelling on the silver screen. That would be a great opportunity to develop some of these characters a bit more, and give the whole thing some much needed oomph. Unfortunately, there isn't quite enough momentum as it is in the telling of this story to set it apart from its beige, lurking, edible namesakes.