Whoever it was at developer Traveller's Tales that came up with the idea of getting a license for Lego based games must have a seriously big blocky smile on his face. That and a bulging wallet.

Since their first Lego outing in 2005 with the first Lego Star Wars: The Video Game title, they've also plundered the film franchises of Indiana Jones, Harry Potter, Pirates of the Caribbean (with Lord of the Rings next to hit the block) with incredible success.

With so many of them out there now, you would think that this Batman sequel would have very little to differentiate itself from the other Lego titles.

The fact is however, that this title is the very first to utilise something that none of the others have before it: dialogue. Yes, Batman speaks! It really is such a small thing, in essence, but it makes a real impact in the game.

As adorable as it has been for characters to gargle all kinds of noises in previous titles, the leap from that to dialogue, is akin to going from silent films to the talkies.

Characters talking helps develop the storyline no end. Sure they could have easily got away with the usual grunts and groans, but really, why not hear what your characters have to say? Not only that, the game isn't limited to simply visual humour anymore, which is another huge lift for the series.

And what of the game itself? Well, if you've played any of the previous titles, you'll be right at home here. 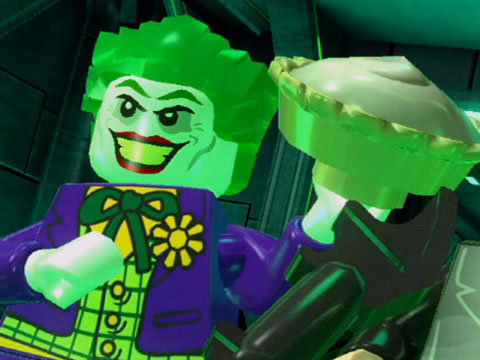 I'm so happy. I followed Jamie Oliver's recipe for lemon meringue pie and it turned out great. Now, who wants it?

With their Lego games, Traveller's Tales have probably created one of the most enjoyable drop in/drop out two player games in recent years. Obviously it helps if you're on roughly the same page as the person you're playing with  if not, it's surprising how ugly things can soon get  as the game is all about co-operation.

Both Batman and Robin have a number of suits that you will need to get the hang of to proceed through the game. There will be times when one of the characters won't be able to progress any further until the other has overcome a problem of some sort, wearing the necessary outfit.

Also getting in the way are a number of familiar foe faces, including Two-Face, Penguin, Bane, Scarecrow, Riddler and Poison Ivy, who all take orders from Lex Luthor and Joker. Thankfully the dynamic Lego duo don't have to tackle them alone, as they have a number of superhero friends to help them out, the most notable being none other than Superman.

The story, surrounding Lex and the Joker taking over the world with their Deconstructor weapon, is a simple one but utterly engaging. Obviously it isn't as dark as the more grown up Arkham games, but certainly no less fun to play.

Occasionally it's not quite clear what to do next, but with such a fun sandbox environ to play in, you don't really mind. And thankfully the game can be saved throughout the levels, which has been a huge irritation with previous titles.

And although there's no online mode, there is the usual mammoth amount of replay value that's often found in these Lego games, which will have you coming back time and time again.

There was a real chance of all of the Lego series starting to go a little stale, but since they've found a voice  quite literally  means that there's still life in these old blocks yet.