When Lego Star Wars reared its Lego head into sight in 2005, it was met with universal praise and acclaim. Four years on however, and there are signs of severe Lego fatigue.

One of the main problems with a Lego Indy series is that everyone wants to play Indy. Thats all well and good if youre playing through it in single player, but as soon as you play co-op, the arguments begin. Short Round, really? We dont think so. And it doesnt matter how butch some of those women are, we dont want to play them. At least in Star Wars, even if all the main characters had been chosen, you could still chose a real cool peripheral character. Not so here.

Obviously being yet another Lego Indy game, this problem remains. Thankfully though, it addresses one of the main gripes with all the Lego games: playable characters trying to work together in co-op mode. In the past, both characters had to share the same screen at all times. This proved frustrating if one of you was in a precarious situation, only to fall/be dragged etc to your death because your co-op player wanted to see what was in that box right over there. This can seriously test a friendship, believe us. 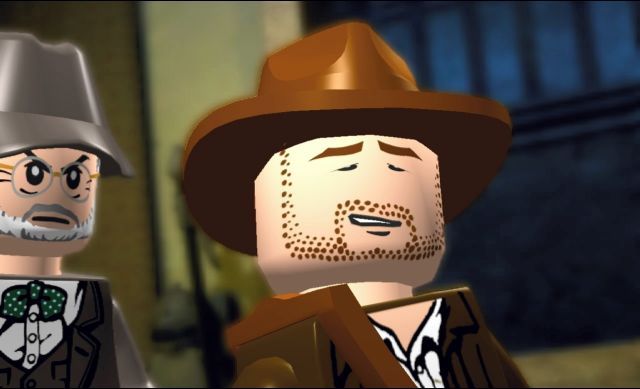 Listen old man, if you tell me that you called the dog Indy, one more time...

Thank god for split screens we cry! Or so you might think. However, by halving the playing area for your own particular character severely reduces what you can see. Rather ironically, this results in a similar outcome to playing it in full screen i.e. death. So then, perhaps its back to the Lego blackboard again for this one.

There are more vehicles to play around in with this one, which would normally be a good thing. Sadly though, they handle about as well as a bar of soap in a wet bath. Whats worse is that theyve now introduced vehicle levels where you have to destroy a certain amount of other vehicles around you before you can progress. This is the definition of tedious. And just when you get through one wave, even more turn up. And we thought Lego was supposed to be fun.

For some reason, theyve also tinkered with the way you progress through the story. Trying to navigate through the main hub area is almost a mini puzzle game in itself. It appears you cant just finish one Indy adventure from beginning to end; instead you have to hop from one to the other.

Anyway, enough with the niggles. A nice addition is that of boss levels. Working in co-op to discover their weaknesses is a bonding experience. Or yet another opportunity to start shouting at each other, it all depends on how you get on with the person youre playing with really.

The main draw of this adventure to the previous one is that it includes a level editor. This will excite those types who enjoy, say, creating their own Little Big Planet levels, for instance. If thats not for you, then this isnt necessarily the Lego adventure for you.

It feels that we may well be reaching Lego saturation point very soon. Did the gaming world really need Lego Rock Band? What next? Lego Fifa? COD 7: Lego Warfare? In all honesty, wed be more than happy with just a Lego Lego game. Thats right, a video game where you could create what you want with virtual Lego. They could even call it Little Lego Planet if it made them feel better.

As far as this Indiana Jones franchise is concerned, its definitely hit a Lego brick wall. Its by far the weakest in the current video Lego world, and much like the big screen Indy, it may well be time to put the whip on eBay and settle into some comfy slippers and retire with a bit of dignity intact.