With a career that spans from the early eighties to present day, Kevin Costner could be considered one of a dying breed – the archetypal Hollywood leading man.

Even during the height of his success, with hits like The Untouchables, Field of Dreams and Dances With Wolves, he’s always come across as an actor not of his time. Costner is in the mould, physically and emotionally, of someone like Gary Cooper, who has a cinematic presence, without having to give too much in a performance to stand out.

It’s fitting then, that he stars in this post-modern western with Diane Lane, as a man of few words and actions. 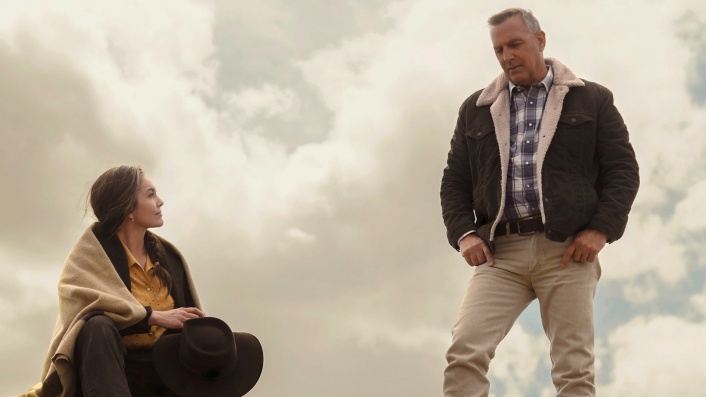 What I'm trying to say is that I peed just where you're sitting earlier...

Grand-parents can be incredibly attached to their grand-children, and Margaret (Lane) and George (Costner) are no different. Their connection with their young grandson Jimmy (Bram & Otto Hornung) is slightly stronger due to the fact that his father, their son, recently died in a tragic accident.

After a few years their daughter-in-law Lorna (Kayli Carter) remarries, and although Margaret and George aren’t exactly thrilled with the union, they accept it.

What they do struggle with however is the way Lorna and new hubby Donnie (Will Britain) just up and leave in the middle of the night with their grandson, without a word.

Not willing to just let it go, the pair decide to hit the road in a bid to track them down, in an attempt to see their grandson again. What they aren’t aware of is the fact that Donnie comes from the kind of family who don’t exactly welcome strangers with open arms, making for an extremely fraught family re-union. 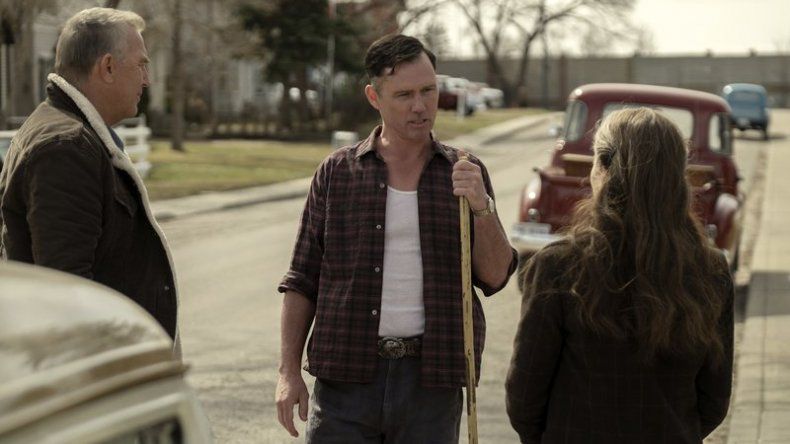 It's just a small thing but we did find two wet leaves stuck under the doormat.

Much like a horse that is belligerent about going any faster, this film is extremely slow paced, with no intentions of going from a walk to even a trot at any time throughout. And although this film is set during the late fifties and early sixties, director Thomas Bezucha is keen to pay homage to westerns of old.

He certainly does that with the casting of Costner, whose dialogue script must have only been a few pages long, and yet you simply can’t ignore him in any scene he’s in, like a modern day John Wayne. Lane certainly matches him however, giving a similar plucky performance of a woman prepared to do what it takes to protect her homestead.

Where it loses its way a little is in what the film attempts to achieve: for much of it, there’s a story of a couple coping with the loss of their son, grasping onto their past through their grand-child. And then there’s curious other family, the Weboys, headed by the mean matriarch Blanche, as played by the versatile Brit Lesley Manville. With their introduction, the film suddenly has whiffs of a survivalist horror, such as Deliverance and The Texas Chain Saw Massacre. It’s a curious gear change, however subtle in tone, but one that still manages to feel a little clunky.

It wouldn’t be so jarring perhaps if the film offered something by way of western cinematography, with breathtaking landscape vistas and the like, but as this is only Bezucha’s fourth feature, with the last two being fluffy comedies, its soon apparent he’s no John Ford.

Where it does impress is in serving as a vehicle for two mature actors to shine. Both Lane and Costner are rarely off screen during the film’s near two hour running time, and the film as a whole duly benefits from their performances.

It also acts as a reminder that Costner is an incredible talent, who still has the look of a classic Hollywood actor, whose Oscar-winning talents should certainly be utilised on a more frequent basis than they currently are.

Perhaps in more experienced hands, Let Him Go could have had the same kind of impact that, say, Eastwood’s Unforgiven had, and although Bezucha has a brave stab at it, and despite having both Costner and Lane in excellent form, it’s a film that will only stir interest as opposed to dazzle in any shape or form.