It's been five very long years since we last heard from Sweden's The Hives. Apparently it wasn't meant to be that a long a break, but after their last studio album The Black and White Album, they decided to part ways with their record company and release their next one independently. 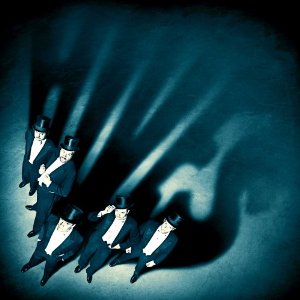 This new-found independence was supposedly going to free the band up creatively, and not have them rely on the availability of a producer to get them in the studio. But as it turns out, things take a little longer when you have five heads giving their input.

No matter though, as Lex Hives, released on their own label no less, is finally here.

If you were concerned that this new-found freedom would change the band somehow, perhaps seeing them more eager to explore new musical territory, the opening track should allay your fears. 'Come On' comes flying out of the traps like a Grand National winner. Its drum beat alone is so fast it could easily cause startling palpitations. But at a mere one minute and eight seconds in length, it leaves you on an expectant high.

Next up is the first single off of the album, 'Go Right Ahead'. It's yet another example of the band's ability to write tight, infectious rock anthems. And all within a hurricane of noise with more energy than a dozen Red Bulls. It's difficult to understand, but they make it appear so damn easy.

There's no time to catch your breath as '1000 Answers' pounces out of the blue. It's fast paced rock with no time for any rolling nonsense. Although it's almost double the length of the first track, it still feels incredibly abrupt at just over two minutes long. Still, two minutes of rousing Swedish rock is better than none at all.

There's more than a faint whiff of 'I Love Rock N' Roll' by Joan Jett and her Blackhearts about 'I Want More'. The pace is slightly more relaxed, but by no means at the expense of volume. Howlin' Pelle Almqvist (admittedly, quite possibly the unlikeliest rock 'n' roll name in history) gives his voice a rest for the most part of this track, slowing it down for a more accessible vocal  before letting rip for the chorus that is.

'Wait a Minute' brings with it a touch of early INXS, just before Michael and the boys became the final polished article. With a chorus so bouncy it should be used in all Olympic volleyball games.

The next track, 'Patrolling Days', must be considered positively epic compared to most here, coming in as it does at a hefty four minutes, which also makes it the longest track on the album. Yet another tune that has a relentless drive to it, with yet another addictive chorus attached. It's the kind of song that should come with a health warning for any Glee clubbers.

'Take Back the Toys' starts as it means to go on, and doesn't waste any time making its point. Despite its brevity, it paints a picture of an awkward relationship that doesn't end well, proving that not all couples can finish with an Oprah ending. It's so deliciously angry.

For the first time the pace slows for 'Without the Money'; a blues-infused ditty that's probably the closest thing to a ballad on the album; but be very certain, this is no ballad. It's a little clunky, but shows that the band have a little bit more range than you would possibly give them credit for.

The quiet is quickly dispelled with the arrival of 'These Spectacles Reveal the Nostalgics'. No really, that's what it's called. It would be great to have it released as a single just to hear DJ's having to announce it on the radio. It's a wall of sound with no cracks in it whatsoever.

Drums. Guitars. Screechy vocals. Another humdinger of a song courtesy of Lex Hives by way of 'My Time is Coming'.

And just when you can't imagine them turning it up a notch, along comes 'If I Had a Cent'. It's just one of those tracks that you would kill to play on Guitar Hero, but one where it would be a joy to sing the vocals, play the guitars and drum those drums over and over again.

Before you know it, the final track is passing you by. 'Midnight Shifter' is much of the same that has passed before, which just supports the curious notion of how the band can be so darn consistent in their brilliance.

And then it's gone. At just a smidgeon over twenty five minutes long, the biggest disappointment regarding this album is that many will feel it's way too short. Hell, you can pick up EP's longer than this. But you have to remember quality over quantity, and this album is pure quality all the way.

The reality is, you're getting something that is tantamount to a greatest hits album with a brand new release. Very few bands these days have the ability to produce an album where every track on it is a joy to listen to. The Hives have done just that.

Thematically there may be a little too much similarity between many of the tracks, but when they're produced as well as this collection is, that's easy to forgive.

They may well have been absent from the music scene for five horribly long years, but the world should just be grateful that they're back and on blistering, breath-taking form.