To infinity and beyond. A promise often made by a toy played with by Andy. And although he had adventures with his friends Woody, Hamm, Rex, Bo Peep and the rest of the gang, it was a promise, made by a grounded toy space ranger, which simply couldn’t come to fruition. Until now.

As is the case with all licensed toys, their origins often come by way of the big screen, as this one does. The Buzz Lightyear toy was no different, based on a character from a film, and this is his story.

Alexa, can you record The Housewives of Atlanta for me...

After an expedition to explore an unknown planet went wrong, Space Ranger Buzz Lightyear (Chris Evans) is forced to land his ship, with 1200 crew on board.

The planet is less than hospitable, and so a return home would prove beneficial. The problem is, due to an issue trying to leave the planet, the ship was badly damaged – which Lightyear took full responsibility for – with the power source to leave the planet completely destroyed.

So they set up base as best they can, while Lightyear concentrates on getting them home, as he volunteers to test out the crystal power source himself. The problem is, every time he leaves the planet, everyone else ages, even though he remains the same age, as his journey feels to him like a blink of an eye.

On returning from one journey however, Lightyear learns that the planet is now under the scrutiny of a space ship of robots, who seem keen on destroying them all. With only a rag tag team of amateurs to aid him, Lightyear has to find a way of destroying this new enemy if he wants to save them all. 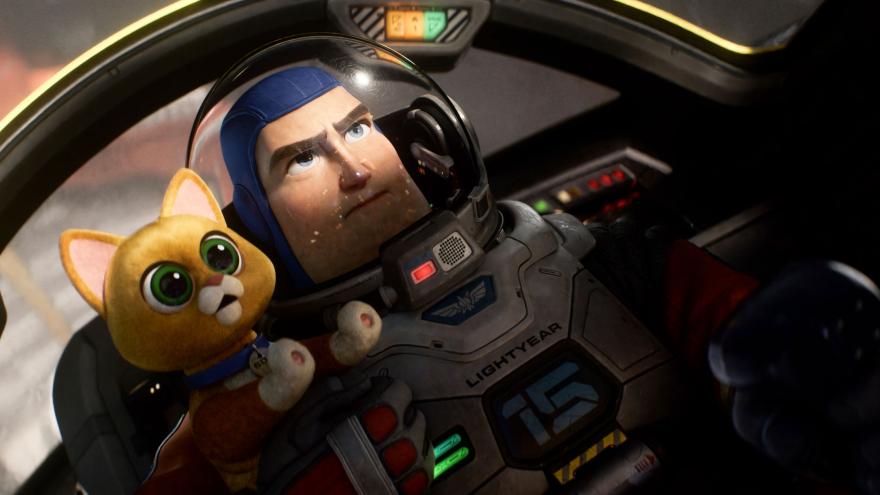 So just remind me, how many lives do you have left?

On its theatrical release, this film appeared to cause some confusion with some of its audience. Where was Woody in all of this? And all the other toy’s in Andy’s house? For some reason, a few struggled with this film’s simple concept, a film featuring the character on which the toy was based. To make it crystal clear, this is not a Toy Story film.

What it is then, is the origin story, of sorts, of the character Buzz Lightyear, and the start of his adventures in space.

The story is highly playful, just as you would expect from Pixar. This version of Buzz is of course everything that the toy isn’t; all his gadgets work, and he truly is a space ranger. He’s therefore not used as much as the comic foil as the toy version was, which is why he has a keen yet not very inexperienced team to help out in that department, which is no doubt why Taika Waititi, who has his fingers and voice in so many pies, was brought on board for comic effect, as part of the team.

But Buzz also has a robot companion, who comes across as a homage to one of the cutest space sidekicks, Twiki for Buck Rogers in the 21s Century, SOX the robot cat. Not only is he adorable, he’s also highly useful, and the relationship that grows between the two is genuinely heart warming.

And although the plot isn’t overly complicated, it has an interesting take in terms of the main baddie, which certainly gives it more gravitas than expected.

The real star however, is the animation. Considering Pixar have previous in wooing audiences with their visual splendour, somehow Lightyear manages to take it up a notch. It manages to pay tribute to the art styles of the likes of Star Wars and classic Star Trek episodes, without ever resorting to looking overly cartoony. Some of the artwork is breathtaking; from the rough-edged, lived-in interiors, to the stunning space vistas, it impresses on every level.

It’s understandable that the fact that Evans voices the character, and not Tim Allen, who voiced the toy, irks a number of folk, but the reality is, after a few minutes, it doesn’t even matter.

It was a brave move to take such a beloved character and redefine his existence for a spin-off, but it has paid off in spades, and works incredibly well. It has all the elements that we love about Pixar - which let’s face it, some of their other recent releases sadly haven’t – making for a truly entertaining space adventure.

One small step for animation, one giant leap for Pixar? Perhaps.


***We've copies of Lightyear on Blu-ray to be won, as well as a poster, in our latest competition. For your chance to win, enter here.***