It's fair to say that when Sackboy and his material friends rocked up on the PS3, it was like a breath of fresh air  not just for Sony but for all of console gaming.

The game was an indication that there was still creativity left in the industry, with its creative twist on the tired platform genre.

As you would expect, Sony have been keen to milk their exclusive cash cow (easily produced with the game's own editing tools) and Sackboy makes his arrival on Sony's latest handheld the PS Vita.

If you don't know by now, the Vita is a veritable power house of a handheld. So much so that as soon as the game loads on its gorgeous OLED screen, it doesn't feel any different from its outings on its console cousin.

This then isn't a crow-barred version of the console game, but a bone fide edition of LittleBigPlanet for the portable generation.

Everything that is cute and charming about the PS3 versions is still intact here, with only one difference  it's actually better. 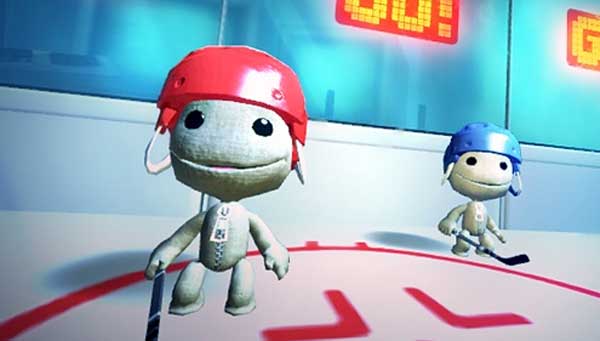 Excuse, me, yes, you there, I'm talking to you, can we have our puck back please?

Fans were concerned when they learnt that Media Molecule weren't looking after the Vita version, but as it turns out Double Eleven have produced a truly impressive entry into the franchise.

Everything that makes the console version such a joy is here: the well-crafted level design; the fun story line (involving an evil puppeteer who is taking over the world with his minions); mini-games; the ability to create your own levels and of course play those created by others.

But what makes this possibly the best incarnation of the series yet are its touch abilities, both front and rear. The mechanics could have easily felt bolted on, but due to the nature of the game, the touching aspects feel a natural extension. Blocks can be moved around, pushed out from the back, as well as the ability to aim at enemies whilst shooting, plus the ability to trace a path for your flying Sackboy to fly through.

The only downside to this can be the slight sensation of not having enough fingers or thumbs to not only control your Sackboy through normal means of using the analogue controllers, but by smearing your greasy mitts liberally front and back of the console as well.

Other than that, Double Eleven have pretty much thought of everything. Where you think it would probably seem inferior is in the multiplayer, but they've thought of that to, the clever clogs. There are still sections within the levels that require you to play with someone else, and the way of doing so is of course by going online. If you're connected to the internet the game will automatically tell you if you want to proceed on that level on your own with someone else. It's that simple.

Despite its cutesy facade it still plays as quite a challenge. Sometimes it's just that old nemesis physics causing all the problems; the games physics react so well, that occasionally they react too well, particularly in boss battles. You could lose a life, pop out of a revive point and then instantly die without doing a thing. It's a frustration worth dealing with though, in the grand scheme of things.

And although the game appears on a handheld format, none of the online capabilities of the console version are lost here. This means that, due to some fairly creative and crafty types, there are endless worlds to explore and enjoy. And if you don't think that they're up to much scratch, then feel free to design your own level and upload it to the thriving LittleBigPlanet community.

Clearly that's not nearly enough to keep folk entertained, so Double Eleven decided that the game also need a fine selection of mini-games to play at your leisure, once you've managed to unlock them in the main game.

Not only is there nothing like this for the PS Vita there's nothing quite like it on the whole of our very own LittleBigPlanet. It is gaming at its purist and anyone with a Vita should definitely get very hands on with it.