No one likes the cold. The only person in the world who does is David bloody Attenborough, as he gets to shoot the likes of penguins huddling in a group to stay warm and make a fortune from his documentaries.

Games with snow in them however, can be cool. Suffering the chilly tundra of E.D.N III, the planet from the original game albeit set years before the events that happened in it  is a combination of hanging out on your very own planet Hoth, mixed with the eeriness of The Thing. So yeah, very cool.

The story is told in flashback, as the game's protagonist Jim Peyton, on possibly his deathbed, tells his story to his granddaughter, of his time on the planet. We then begin playing as Jim, in his youth, as he arrives on the E.D.N III for the very first time.

Jim is an accomplished miner, who has taken on this job for the big bucks. With his own personal mech in tow, Jim is sent out on various jobs to different parts of the planet. It's the kind of planet that would have David bloody Attenborough rubbing his hands in glee (with gloves on of course, due to the extreme temperatures) as there are a number of species that exist there. The problem for Jim and the rest of the crew however, is that they aren't as cute as penguins. 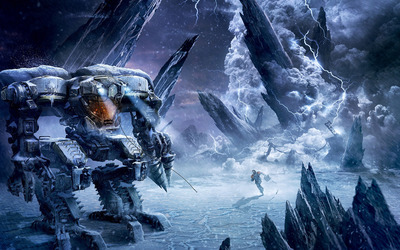 Breakdown cover, particularly in space, is always a good idea.

Many fans of the original were let down by the original's sequel, as it went off-piste as it were, as far as the story and gameplay is concerned. Luckily, Lost Planet 3 sees a welcome return to the story and structure of the first outing.

One of the pleasing aspects of the game is the chunkiness of the graphics. They have an arcade quality and charm to them, despite not being terribly impressive. That said, whoever programmed the weather did a terrific job and deserves, at the very least, a certificate or something for their dedication; at times, when Jim is out on his rig, listening to some pleasing country tunes on its radio, you can easily get lost by the what the weather is doing outside. It's at its best when it's at its most ferocious.

Then there are the aliens. They leave a lovely, bloody mess once you shoot them which is most satisfying. The boss fights are your standard hit the glowing red parts of the creature's anatomy, which may be a little tired, but are still fairly challenging. They are only let down by the arena they are played out in, which Jim struggles to traverse around; to get him to attempt anything like a run, by pushing down on the left stick, is just too fiddly, and he often finds trouble getting out of the way of his foe. He's also not helped by the supply drops; to pick up ammo for instance, you have to approach it at a very exact angle before you're prompted to press the B button, by which time you could quite possibly be dead.

The game is saved however by an intriguing storyline, and by a likeable hero in Jim, who is a pleasing down-to-earth (on-another-planet) type of guy. It also has a nice line in humour, which isn't always expected in a game like this.

It also feels pretty awesome getting behind the controls of a mech; it's just a shame that it wasn't fitted with some serious fire power from the off, with the ability to cause massive damage. Still, at least you can get some mech action on in multiplayer mode, as well as on foot, which is a nice addition.

Although Lost Planet 3 clearly doesn't get the most out of this current generation of consoles, it does just enough to make it an enjoyable experience. The next big question however, is if Capcom are willing to really push the series with a fourth outing on the next gen, where it has a real possibility to shine and truly stand out from the crowd.