Race has always been a contentious issue and will no doubt continue to be so, sadly. Nigerian-born director Julius Onah however, comes at it from a very different perspective with his latest film. 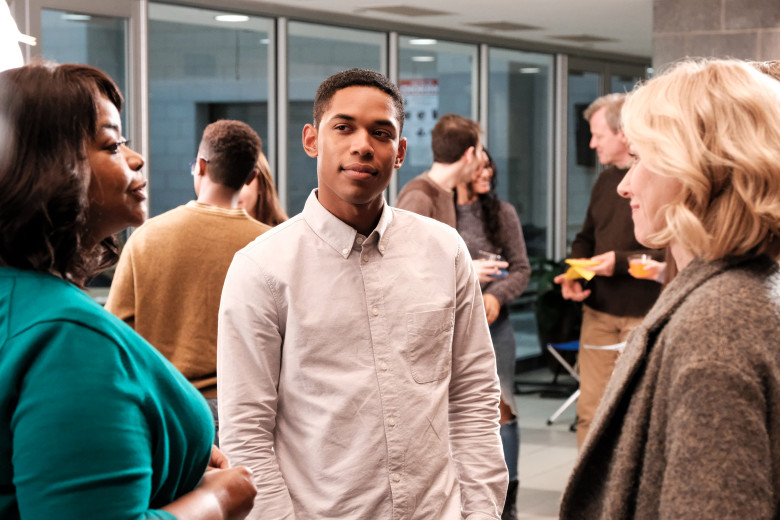 I think I will have those cute roasted vegetables from catering at lunch.

At the age of seven, a young boy was rescued from war-torn Eritrea, and adopted by American couple the Edgars – Amy (Naomi Watts) and Peter (Tim Roth), from Arlington, Virginia. Struggling to pronounce his name, they rename him Luce.

After years of therapy and support, Luce (Kelvin Harrison Jr.), now on the verge of graduating high school, is an exemplary student, excelling both academically and on the sports field.

He is the golden boy in every sense, both at home and at school. It’s only when he hands in an essay to his teacher Ms Wilson (Octavia Spencer), that she begins to hear alarm bells as far as his mental state is concerned.

When she attempts to get to the bottom of it, she is confronted by obstacles, ones that she slowly begins to realise may well have been placed there by Luce himself, making him far more devious than anyone would give him credit for, including his American parents.

And now I move on to what the Matrix 2 was really about...

Onah’s film, written by J.C. Lee adapted from his own play, explores race from a curious position. The protagonist is a young black man, who has been afforded a comfortable life since his arrival in the US, and has taken full advantage of that fact. He has been given a unique platform to better himself in every way, which he not only recognises, but works incredibly hard to make the most of what has been given to him.

The conflict arises from his feeling of tokenism, held up as he is by teachers in the school, as the perfect example of what a young black man can achieve when given the opportunity. Luce has focused simply on getting along with his fellow students, just wanting to be a part of them, but often finds himself being used by the staff as to what many of the students should aspire to.

This backlash to this overriding feeling from authorities, leads to some unsavoury behaviour, which may well have originated from Luce. It’s this ambiguity that Onah builds on, that gives his film an almost horror quality, with the possibility that Luce could be, underneath it all, a troubled and scheming individual.

Certainly fuelling this sentiment is a superb performance by Harrison Jr., who manipulates both all the characters around him, and the audience, with remarkable ease, forcing everyone involved to constantly second guess what his true colours are.

At times the film feels almost too vague in what it wants to say, with the story flowing with an alarming fluidity throughout, offering too much in the sense of ‘is he or isn’t he?’. The parents also, for the most part, come across as too liberal and wishy washy, needing to be forced into a corner to take a side, one way or another.

The most interesting relationship is between Luce and his teacher Wilson; it’s an intriguing dynamic that could have been developed far more than it is here.

The cast certainly deliver the goods, particularly young Harrison Jr., but the film itself tries too hard making audiences run mentally in circles over and over, to the point where it gets a little dizzy itself in what it’s trying to say exactly.

It’s certainly commendable to try to make an audience work, but there’s a fine line between making them think and over think, and this film certainly makes them do that, one too many times.