Sibling rivalry can be a terrible thing. Not only can it be ultra competitive, it can lead to families being torn apart. If you need an example of how bad it can get, try buying tickets for the next Oasis gig. That's right, you can't.

In the gaming world, one of the fiercest sibling rivalries has been on-going since 1983; a year which saw the debut of a certain Mario and Luigi. Although back then it was difficult to tell the two brothers apart, except for a difference in overall colourings, somehow Mario became the alpha pixel male and went on to become a gaming icon.

For the most part, Luigi has seemed resigned to be his brother's reliable sidekick, hanging back in his immense shadow, helping out as best he can. In 2001 however, he stepped up to the gaming plate for his own adventure: Luigi's Mansion on the GameCube. Not only was it the best-selling launch title for the system, it was the beset-selling GameCube title for the year.

Since then however, Luigi returned to his brother's side to continue his sidekick duties. No doubt Mario belittled poor Luigi, tapping away at his self-esteem and quite firmly putting him in his place of second. But feeling braver than usual, or even perhaps after a bit of therapy (although not qualified Princess Peach is said to have a very good ear), Luigi is going solo once again, as he returns to the spookiest of locales. 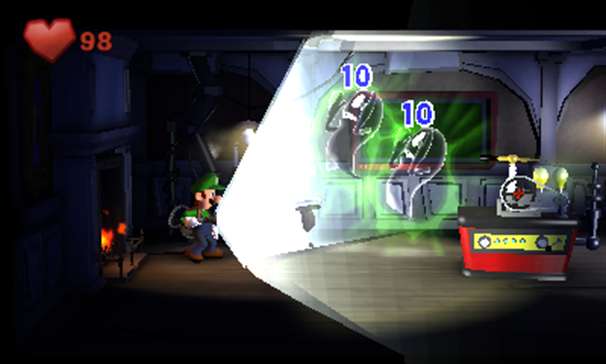 And what have you two been up to in the dark, eh?!

Despite being full of ghosts, Evershade Valley is a peaceful kind of place. But when the mysterious dark moon shatters above it, the ghosts soon become far from friendly.

Local ghost expert Professor E. Gadd is monitoring the situation and decides to call his number one ghostbuster in to save the day  Luigi. He may be a reluctant hero, but with the Professor's help, Luigi finds the courage to track down the missing pieces of the Dark Moon and restore order to the world.

Luckily for Luigi, he's being equipped with some top-notch kit; with one hand he has a tekkie torch known as the stroboscope, which can not only stun his ghoulish foe, but can also reveal secret objects, doors etc; and in the other hand, he can hold onto the nozzle connected to his Poltergeist 5000 vacuum cleaner that has more suction power than a Dyson.

As you set off as Luigi on his ghosthunting expedition, it's difficult not to constantly marvel at the detail of your surroundings. There's a macabre beauty to the overall design of the game, which clearly pays homage to early, black and white horror films of the Bela Lugosi and Boris Karloff classic era. And although it's a game that forces you to explore every inch of your surroundings, it never becomes a chore.

With five different haunted areas to investigate, Luigi has a lot of things to collect along the way. Not only does he have the missing pieces of the Dark Moon to collect, he also has gems to find too. And every mansion has a number of puzzles to solve, many of which may find you removing Luigi's cap so you can scratch your noggin over. They can be taxing, but never overly frustrating.

There's even a nice multiplayer mode thrown in for good measure that can be played ad hoc as well as online.

What the game has oodles of is atmosphere. Not only does it look amazing - particularly in 3D mode, making it one of the most impressive 3DS titles yet for its use of depth  but it has an impressive orchestral soundtrack which is so integral to the game as a whole.

And then you have those little things, those details, that manage to put a smile on your face. The most adorable one being Luigi occasionally walking around humming out loud the game's own theme tune.

It would almost be the perfect gaming experience you would ever get your hands on if it wasn't for one thing; at no point during a mission can you save the game. For a game on a portable device this is a massive oversight. At one point during a mission, we noticed our low battery light flashing, and we had to try to finish the current mission before the 3DS died. We didn't, which meant when we loaded the game, we had to start that mission from the beginning. Now this wouldn't be a problem if the missions were short in length, but many of them, particularly if you take your time over them, can easily surpass the twenty minute mark.

It's a shame that this wasn't picked up during its development, as it puts a damper on what is otherwise a tremendously entertaining experience. If you've got the time to devote to it, you won't find a more fun and rewarding game currently available on the 3DS. In fact if you own a 3DS, this truly is a must-have title.

With Luigi in such fine form, Mario may well have to sharpen up his plumbing skills in the near future, as he may well not be needed anymore.