Given to the Wild

It's a new year and a new album for London's five piece indie outfit The Maccabees. The lads appear to be in a fairly melancholic mood too. 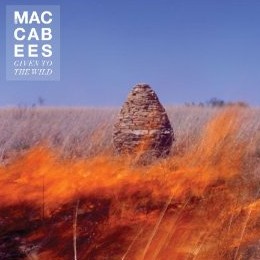 There's something a little pretentious about it though, as the first track  a 2.11 intro  'Given to the Child' demonstrates. It's a quiet instrumental that gently runs into the next song 'Child'. There was a time when the opening track of an album was where you laid out your intentions for the album. Not any more it seems. An intro this bland is not a great way to kick off an album.

It doesn't help 'Child' in any fashion either, as it takes a four minute song and essentially extends it unnecessarily by another two. It's probably a case of the idea working better in the bands collective heads than in our ears. There's a pleasing horn section working its hardest, but Orlando Weeks' vocals are so desperately limp, they kill the track dead.

Although the tempo thankfully picks up for 'Feel to Follow', again the vocals have no backbone to hold the song up. Weeks sings as if he's really struggling to stay in the key he's chosen. And he is. He's clearly confused the notion of passion with just straining. The guitar work helps to wake you up from an audible coma, but you kind of wish it hadn't.

'Alya' has more substance about it; even the vocals get some welcome relief in being just that bit deeper, in places. It's all a little repetitive though.

Weeks returns to weightless vocals, as if infused with Helium, with 'Glimmer'. It has an ethereal quality to it that isn't entirely welcome.

It doesn't get any better with 'Forever I've Known'. Weeks sounds like an overly sensitive goth, with something on his chest. If only he could grow a pair and sing about it. He can't.

'Heave' brings with it a little more nuance to the vocals. It's a small detail but it makes the world of difference. You can actually hear what almost resonates as true emotions at times, which is something that has been sorely lacking up until this point. The quick pace to the track doesn't do any harm either, bringing with it a greater sense of urgency.

Tempo is everything. Well it is as far as 'Pelican' is concerned. There's a clear, bright light about the song. The problem is that this first single is not indicative of the rest of the album; so if you hear this and expect more of the same, forget about it. This track is the hat that rests atop the head and shoulders that belong on an otherwise dreary album. It has a life about it that just doesn't exist anywhere else.

There's a warm residue that exudes from 'Pelican' onto 'Went Away'. It has a drive about it, with the promise of a boot full of well-meaning musical intentions. Is this the start of a late comeback?

Perhaps. 'Go' has a positive energy too, even if the vocals slip back into dangerously wishy washy ways. Thankfully they turn the amp up on the guitar which breathes some life into proceedings.

The arrival of a bass doing its thing is certainly intriguing on 'Unknown'. But why does Weeks have to spoil things with his wet vocals, full to the brim with angelic echoes? The song deserves better than that.

Weeks doesn't tweak the weak vocals for 'Slowly One', but actually it doesn't matter. For the first and only time, his high-pitched vocals and the track work quite well together. The second half of the track also decides to take things into its own hands by producing a much needed mountain of noise.

The vocal misery continues with the last track 'Grew up at Midnight', but by this point, there's just a wave of relief raining down with the knowledge that it will soon all be over. Again some really nice orchestration takes place, spoilt by some of the most irritating vocals you're likely to hear on an album.

It's a really curious direction for the band to take, or more specifically, for Weeks to take. It's all very well mixing the vocals up and down, but when they're top heavy nearly all of the time, all that can be heard is a painful drone. Perhaps he should have saved this kind of vocal experimentation for a solo project, because there's no reason why the entire band should suffer.

Ultimately it's an album with little in the way of style or substance. Its one highlight, the single 'Pelican', is its only saving grace, and should certainly be purchased as a single only.

Weeks' voice on the album is akin to a value brand in a supermarket; it does the job, but you know you'd certainly prefer something with a little more quality.

Both Weeks and the band can do better, as they've proven in the past. Let's just hope that they don't see this dire effort as the way forward.