At the ripe old age of 53, the original material girl releases her twelfth album. There was a time of course, when an artist of her considerable standing released an album, it would be akin to an event; but since 2000's Music, subsequent releases have seemingly just appeared  and then gone. 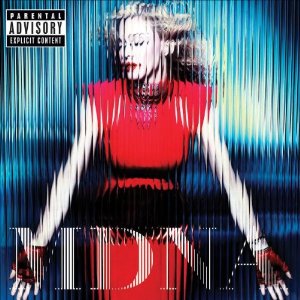 In fact unless you're a die-hard fan who would buy anything with her name on regardless of whether it was good or not, you'd do well in being able to name them all (for those of a curious disposition, or for any quiz enthusiasts, they were 2003's American Life, 2005's Confessions on a Dance Floor and 2008's Hard Candy.

Sadly MDNA is unlikely to buck that particular trend.

There's something very familiar with the opening to 'Girls Gone Wild' with Maddie confessing all to God. You know what they say, Once a Catholic....The track soon kicks in with a catchy dance number. It fits that current hybrid of being a pop dance record. The vocals have gone through so many digital boxes that it makes it difficult to actually recognise the Madonna of old, but like so many phases of the singer's career, it looks like her vocal style has this time been replaced by bots.

To illustrate, 'Gang Bang' could actually be sung by anyone. And without any vocal personality, the rest of the track kind of struggles. Perhaps it's trying too hard to be on trend, but besides a catchy electric keyboard riff, it fails to impress.

A bounce returns with 'I'm Addicted', but again it's so clinically produced however, that there's just no warmth there. As dance tracks go though, it does exactly what it says on the tin.

There's a hint of Madonna of old with 'Turn up the Radio'; at least it sounds like Maddie. Its production however, despite sounding catchy, is all too formulaic. This is not original pop, which is disappointing when you consider how original Madonna was, once upon a time.

Bubble gum pop. That's what 'Give me all your Luvin'' is. "Every record sounds the same" decries Madonna. Ironic much? Knowing what's hot, or to use that dreaded term again  on trend  Madge enlists the help of rising starlet Nicki Minaj for some vocal help and a well-needed injection of youth.

'Some Girls' comes out fighting, with a clump or two of attitude in its pumped fists. This edge dissipates to a point when the poppy chorus cuts in. It's the first time that old and new Madonna together works well on the album though.

There's such a weightlessness to her vocals in 'Superstar' that they might as well not be there at all. It's repetitive and it has to be said, second rate Madonna. It's breezy enough to feature on an ad selling tampons to teens, but that's about it.

Madonna proves just how down with the kids today that she even manages to mention tweeting in this song. And that's probably the most positive thing you can say about 'I don't give A'. Oh and Ms Minaj appears once again in a sad attempt to improve on the necessary quota of street cred.

What do you get when you merge 'Ray of Light' with 'Beautiful Stranger'? That's right, 'I'm a Sinner'. For a dish made up of two different recipes, it works surprisingly well. But far from original, of course.

Another song borrowing from her own and Abba's collection is 'Love Spent', as it includes the Abba sampling that features on 'Hung Up'. But is it really a good idea to sample a sample you've already sampled elsewhere? It also features quite possibly the worst Madonna lyric ever: "guess if I was your treasury, you would've found the time to treasure me". Now that's just painfully embarrassing for all concerned. And somehow, probably due to its retro vibe and musical thievery, it's probably one of the stand out tracks on the album.

It's nearing the end of the album now, and Madonna finally sounds a little bored with all that dancing stuff. Off of the dance floor comes the ballad 'Masterpiece'. There's nothing particularly special about it, but it does feel more like a bone fide Madonna song. Whatever one of those might happen to be these days. Maybe it just sounds like 'La Isla Bonita' to curry favour.

The final track is 'Falling Free'. Yet another ballad. But again, at least it actually sounds like Madonna singing, which is a nice surprise. It gets so quiet in places that you can actually hear someone playing...a piano! How that got through the mixalot producers, God only knows. Sadly the song goes on too long without much digression. It's pretty for sure, but just a tiny bit bland with it.

And so concludes Madonna's twelfth album.

Throughout her most popular years, through all her reinventions, you could always tell it was Madonna. Maybe she's too busy chasing trends, but it feels like that she's not only lost sight of what she wanted from this album, but also who Madonna is exactly right now. As mentioned before, so many knobs have been twiddled throughout this album, that there's no clear vocal style throughout. In that sense it's more of a tribute album than anything else.

Yes, dance is still a big deal, but there's just no originality, or even worse, no personality in this album. It sounds like the most corporate thing she's ever done, which is a real shame.

What's missing here is Madonna's groove. Without it, you're just left with a bland dance album. There's nothing wrong with dance music, there's nothing wrong with Madonna doing dance music, but the truth is, once you've already brought the worlds of dance, pop and Madonna together so beautifully with the album Ray of Light, you're always going to struggle in trying to do it again. And again. And again. And Madonna is clearly struggling here.

This album is more MDF than MDNA: at first glance it could pass as the real thing, but live with it for a while and you'll soon realise what inferior quality it is, and it's nothing more than a cheap imitation and a poor substitute for the real deal.