If youre a hardcore gamer who owns a Wii, you probably feel that old Ninty has stabbed you in the back with a blunt pony. Of course in the good old days it would have been a Phazon beam or a Master sword, but today its more likely to be a virtual puppy Schnauzer or recipe for Lasagne. Why? Because casual gamers are here, and they have very deep pockets.

But dont unplug your Wii permanently  not just yet at least, as there is a glimmer of hope. And its drenched in blood. Welcome to the black-and-white realm that is Madworld: it is a world so dark that it could easily make the most casual of gamer weep in their pants. And you dont need any more endorsement than that. 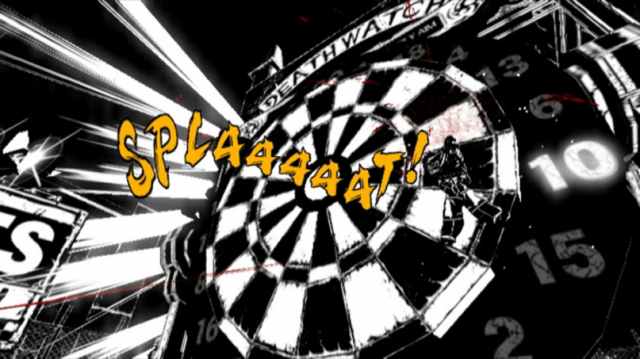 Jack Cayman is a brute of a man; as if you need any evidence he has a meaty chainsaw attached to his right arm. Thats right, a chainsaw. He enters Varrigan City on a mission to save the Mayors daughter. However, the city is the latest venue for the popular show Death Watch  its rules are simple, kill and you survive, die and you lose.

So Jack has to kill his way through the city; thankfully though, hes pretty good at it. If you hear a yelping in the background while youre playing, its probably your Wii sobbing uncontrollably. You see, it wont be used to this level of violence. The game could easily be the bastard child of Tarantino. The sense of gore is heightened by the fact that the game is played out entirely in a black and white world. And yes, it looks like Frank Millers Sin City graphic novel lives and breathes on the screen in front of you.

However, this monotone environ is soon splattered with blood red, as Jack begins his massive kill count. The key to big points is killing creatively. You are encouraged to use the objects around you: a sign post through a head, a body thrown onto a meat hook, or perhaps thrown into a grinder. The choice is yours. Pull off a combo kill and watch the points fly. Yes it is violent stuff, but in the same way that Itchy and Scratchy cartoons are; lets face it, even in a Mario game you can kill things with flying shells, fire etc. Just because theres less blood, does it make it any less violent? And the game never takes itself seriously, so really, no one playing it should either.

At first the ease with which you can kill builds up your confidence. This, however, is certainly heavily dented the further you delve into later levels: it gets real hard. Thankfully, each area has a unique look and feel about it, so it doesnt feel like youre just playing through the same old level over and over. This is also helped by various mini-games you encounter throughout; who wouldnt fancy a gory game of man darts for instance, where you hit your enemies with a baseball bat onto a dartboard?

Ok, so it all sounds too good to be true at this point. On the down side, the camera can be irksome; you can move Jack in one direction, then suddenly find yourself being attacked from behind, without being able to turn around and deal with them with the appropriate use of force you would like. Still, its a minor quibble.

Another bummer is the fact that there is no online play. Taking your chainsaw and other implements of pain on a world tour would have been an immense amount of fun. By way of consolation, you can have some multiplayer fun with... youve guessed it, some mini-games. Just what you need on your Wii, right?

Madworld is the perfect violence-ridden antidote to the Wiis endless conveyor belt of fluffy casual fun. Its success rests in the blistered hands of the hardcore. If it fails, and the Wii does end up a trophy system to all those Wii sport tennis twerps and their kind, we only have ourselves to blame. The fight begins here and now. This is a call to arms, legs, torsos  in fact any kind of gruesome dismemberment. So pick up Madworld and get your hands bloody.